Last October, I spent a couple of days in Minneapolis, Minnesota, and I stayed at the Renaissance Hotel, a.k.a. The Depot. At first, I thought it was just a catchy name, then I realized it was the old Milwaukee Road depot. Much to my disappointment, I later discovered that I could have stayed in a portion of the depot where suites from the original dept had been restored. I vowed to return, and, as the title states, I did.

Last week, I spent a few days in Florida, attending a business meeting. On the way home, I inserted a personal leg to my trip and flew to Minneapolis (MSP). I can fly from Minneapolis to Des Moines, Iowa (DSM), where my brother can pick me up, but he is also willing to pick me up at MSP. It’s a three-hour drive, but people in the Midwest would drive three hours for a good pancake…five for a good burger. I offered to break up the six-hour round trip, with an overnight stay in one of the historic suites, a steak dinner at Murray’s and a walk across the Mississippi River on Saturday morning.

Except for the fact that Washington Ave in Minneapolis must be the late night / early AM race track for tricked-out-extra-loud motorcycles, the hotel was wonderful. The hotel’s history page provides an array of interesting facts:

“The old Milwaukee Road Depot was constructed in 1899 and remains one of the last long-span, truss-roofed sheds surviving in the nation.”

“In 1971, the Milwaukee Road terminated rail service to Minneapolis and converted the building into office use. In 1978, the Minnesota Historical Society placed The Depot and the nearby freight house on the National Register of Historic Places.”

“In 1998, the MCDA approved a land sale to CSM Corporation for the development proposal currently underway at The Depot. The finished complex includes the Renaissance Minneapolis Hotel, The Depot, the Residence Inn Minneapolis Downtown at The Depot, an interpretive history center about the Depot, Milwaukee Road, banquet space and underground parking for 650 automobiles. The entire project was completed in July of 2001.”

In addition to the hotel, Murray’s Steakhouse also has some history to it. It’s located in one of the oldest buildings in Minneapolis. The restaurant opened at its current location in 1939. I first ate there in 1999 while attending a technology conference, and I can report that the food is still very good.

I’m going to end here, because there are some lengthy captions in the gallery. You can best access the captions by clicking on any photo and starting a slide show.

Thursday Doors is a fun weekly series brought to us by Canadian railway tycoon, Norm “I-run-the-railroad” Frampton. Norm has established an extensive network of rails, bridges, tunnels and other high-tech connections between door stations all over the world. Frampton Depot is in Montreal, Canada, and boasts the longest running gallery of doors on the planet. Head on up there, take a look at Norm’s doors and look for the little blue frog. He will guide you to the gallery where you can set a switch to your station, or just hang around and admire doors as they arrive from stations around the world.

Also in the gallery today, you will find some photos (yes, doors) from our walk across the Stone Arch Bridge, the only arched bridge made of stone on the entire length of the Mississippi River (according to Wikipedia). 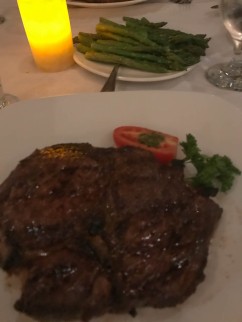 I had to include this for the people who would say: “where the picture of your steak?”

The nameplate of our suite.

There’s a door on the right. I had a more direct picture, but the sunlight was too bright. 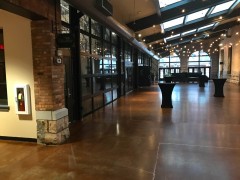 The meeting area at the hotel.

The meeting area at the hotel.

As shown in my earlier post, these statues of people in realistic poses are dispersed throughout the hotel.

The entrance to our hotel from the parking lot.

The door is part of the room divider at Murray’s.

The living room (parlor?) of our suite. 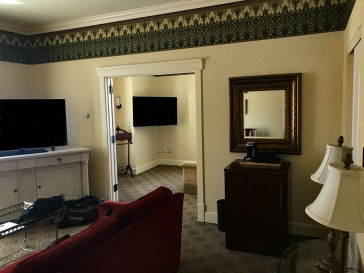 The living room had a sofa-bed. The suite also had a separate bedroom. 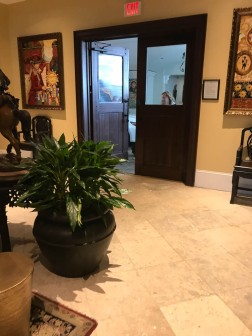 One of the passage doors in the hotel.

The lock set. The doors at the bottom (under the catwalk) are open. The ones at the back are closed.

A sower curtain might not be a door, but I wanted to include a picture of the bathroom. Modern fixtures, historic appearance.

Writing desk by the door of the bedroom.

84 thoughts on “Thursday Doors – I Did Return”