About four years ago, I wrote a post called “I Was the Remote” about how I and every kid my age changed the TV channels, bought snacks and ran errands for our parents. This was back before the streets became so dangerous that the thought of a child riding his bike to the corner convenience store is unfathomable and the act, if attempted, can land a parent in court. In that previous post, I mentioned how I wasn’t just the remote, I was an intelligent remote. I knew what channel the ball game was on. I could even intelligently switch between the baseball game and a golf match, at each commercial, and I could factor the relative importance of each event into my decision to switch back or linger a bit while Arnold Palmer chipped out of the sand trap.

When I hear people talk about how cool it is to ask Alexa to check the weather, play a song, tell them the score or order them five pounds of dog food, I shake my head. I could do all of that, and more, outfitted with nothing more than the senses God gave me and my bike. I responded to my name and a host of other names. I was trusted with money and, as far as I know, my security was never breached.

“Go get me a pack of cigarettes and some Pepsi. My wallet’s on the dresser.”

“We need a quart of milk, honey. My purse is on the chair in the dining room.”

Sometimes, I was given a piece of the action:

“Get yourself some candy, if you want.”

That meant ten cents worth of candy.

I was capable of conducting research and making judgments, something Greta (my GPS), Alexa and Siri are still struggling with, if the comedic results being shared on Facebook are true. While my errands were normally focused on one or two items, if there was a cake in the oven or if my mother was otherwise occupied, I could be given a small grocery order:

“Go to B&I (brothers, Bernie and Izzy) ask Bernie if he has nice pork chops. If he does, get four. If not, get a pound of ground meat. Get a pound of chipped ham, a little over is OK, and get a jar of the pickles your father likes. If they have the Rice-a-Roni we like, get that. If not, get a bag of noodles. Get two cans of corn and a loaf of bread.”

By the way, those would be Pennsylvania Dutch brand noodles, Green Giant corn (not Del Monte) and that wasn’t going to be Wonder Bread. Benvenuti’s or Celone’s – fresh-baked in town. Yes, I remembered my parent’s preferences. No need to fill out, or periodically update a profile. When my father was diagnosed with Diabetes, he switched from Pepsi to Tab – no need to tell me twice.

I was also tasked with trips to the garden, but I wasn’t quite as reliable, I had a tendency to confuse parsley with carrots. Still, let’s see Amazon’s drone swoop down and pull a yellow onion out of the ground, rinse it off and bring it to my grandmother’s kitchen. And, once again, my judgment was relied upon.

“Go pick two tomatoes. If the ground is dry by the new plants, give them some water.”

I could handle that.

“I need you to take my car to Bobby’s for an oil change tomorrow.”

“Go get a dozen ears of corn.”

“I have to work Friday night, so you need to take Gram shopping.”

I knew where Bobby’s Esso station was. I knew what farm stand to get that corn from and I could pick 12 good ears out of the pile. I knew that my mother’s mother shopped at A&P and she liked to leave at 6:00 pm.

What do today’s kids do? What do they know?

Maybe that’s not a fair question. Today’s kids know how to interact with the world they have been born into. They are preparing or being prepared for their future. Their present doesn’t include a corner market or parents who have cash in their wallets. Alexa and Google know more about their parents than the guy at the 7-11, and that guy can’t sell cigarettes to a nine-year-old anyway. They know how to entertain themselves, albeit that probably involves more technology and less dirt than it did in the 50s and 60s.

My service as the voice-activated personal assistant for my parents, prepared me for living on my own. I guess that’s still true today, but I wonder. I wonder if anything can prepare children for the future, given how fast things are changing. I also wonder if some of the skills I learned wouldn’t still be useful to have.

These blossoms are only going to be around for a few more days, I can’t resist.

I’ve been trying to figure out the close-up features of my camera.

“Um, you can take that peanut and eat it in your tree.”

Pretty soon, we’ll be amazed by the honeysuckle. Then, we’ll be cursing it as it takes over everything.

Maddie decided that the Sand Cherries couldn’t support a photo by themselves.

One more picture of the Beauty of Moscow lilacs before they fade completely.

Lilies of the Valley are perking up. 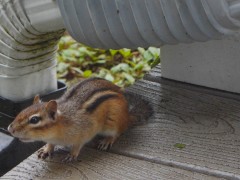 Hopefully, I will be able to get better close-up images in the near future. 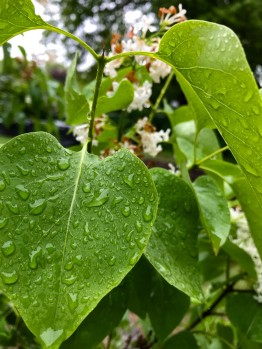 I’m waiting for Maddie to decide where might be the appropriate spot. I’ve reminded her that it’s raining.

There are water drops on those blossoms, but it’s hard to tell. 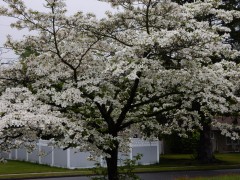 Dogwoods are in bloom all over the neighborhood.

Ornamental grasses in the park. 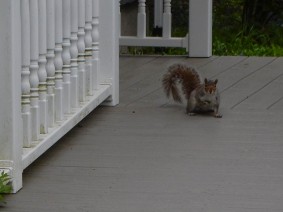 “Hi. If you guys are back from your walk, do you think you could get me a peanut?”

The article said the State was “Renovating” this building.

Not the image I was hoping for, but I like it.