Itching For a Fight

I started a new card in my Trello notebook with the title, but before I could jot my thoughts into a comment box, I started wondering where that expression came from. Of course, I googled. I didn’t find an entry for the etymology of the phrase – that is to say it wasn’t in the first ten results, which means it doesn’t exist…right? – but I found lots of entries for “itch.”

Of course, as is often the case with Internet dictionaries, the definition had to be looked up, because the definition included the word “hankering,” and I was curious as to where that word came from. According to one dictionary: “Probably from Flemish hankeren, related to Dutch hunkeren ‘to hanker, to long for’.”

The point of this post is to explain why I don’t comment or like some of the things I see in social media, including some posts on WordPress. It’s because, as the title suggests, I think the world is itching for a fight, or if you prefer, hankering for an argument. I don’t necessarily think that the people I follow are of that mindset, but these posts frequently attract people who seem more interested in arguing than listening. Honestly, it hurts my head.

Ironically, it was a real-world encounter that caused me to think about this. Someone commented recently that we were having “yet another” day of crummy weather in Connecticut. I agreed, adding that I hadn’t paid attention when the forecast changed from partly cloudy to mostly rain, and I wondered out loud if we would be plagued with another wet weekend.

The person said: “I don’t know, I think our weather has actually been pretty good this year.”

I was startled. Not only was that statement 180° from the thought they put forth two minutes earlier, it was flat out wrong – we’ve had horrible weather this summer.

I sipped my coffee and moved on.

That’s what I do in social media. I sip my coffee/water/beer and move on. The benefit of social media over real life is that I can think twice, and backspace over my initial reaction. I think that’s when being a poor speller helps me. I tend to reread what I have written, looking for the little red squiggles indicating some spelling or grammar faux pas. Sometimes, I just don’t feel comfortable with what I have written. Sometimes, I just avoid social media posts, because I see some of the usual suspects in the thread, and I know that nothing good will come from my participation.

The world seems to be filled with people who make brash, polarizing and proactive statements simply to illicit an emotionally charged reply. I qualify the kind of reply, because I don’t think they are hoping for a logical, rational reply – they don’t seem to want to discuss – they seem to want to argue.

One of the things I enjoy about talking with my best friend John, is the degree to which we discuss things. After I hang up, my wife will often ask “did you two solve all the problems?” Sometimes we do. Sometimes, we set the problems, and our differing opinions, on the side of the road and move on, but we acknowledge the other’s opinion. We don’t acknowledge it out of friendship, we do so because it’s an informed opinion. It’s based in fact, and if the facts are in error, the errors are acknowledged and things like “I didn’t know that” or “that does make a difference,” or “you raise a good point” are said.

Today’s pictures are from the weekend when Maddie was hankering for a walk and then to sit on her cot. It’s cooler here, and we have added cushions to the bench and Maddie’s cot. Soon, the bench will be wrapped in burlap and stored off to the side. After that, we sit in folding chairs. Several people have made comments about Maddie’s likely sadness once it gets too cold to sit. Trust me, those days are few and far between. Last year, we bought Maddie a vest, so she can sit without freezing.

Shadow of a happy pup.

Our favorite puddle, with upside down bird.

Sun is coming up on Maddie’s park. 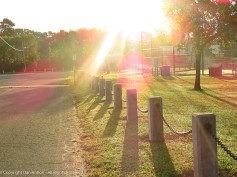 Walking into the park.

“OK guys, get ready to play ball. Last game of the season.”

Maddie is too comfortable to care.

It’s cool enough that we have added the cushion to Maddie’s cot (and to our bench).

“I think the black squirrel is coming over.” 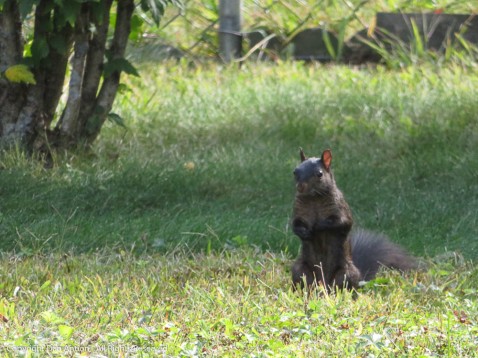 “Hi there. I see you guys are sitting, but can I have a peanut?” 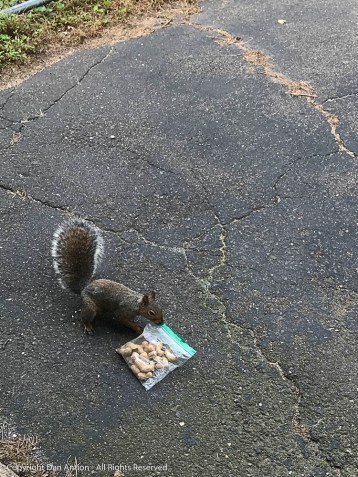 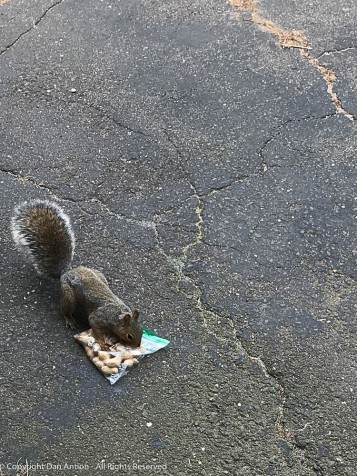 “Oooh look, there’s a hole in this bag…now”

“This one looks good.” 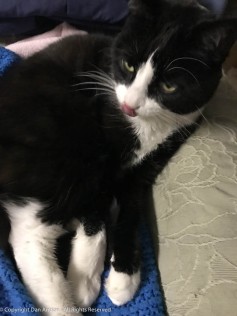 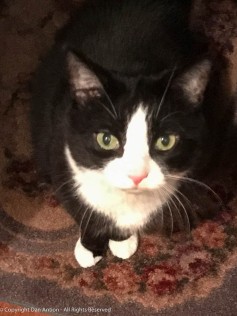 “Yes MuMu, I will scratch you.”