When I described the “first last” meeting I attended in New York, I briefly mentioned attending a technology event at The Javits Center. I love that building, and since my train usually arrives in New York well before the show opens, there is always time to drop my bags at the hotel and walk to the Javits Center. I take a slightly different route every year, which gives me the opportunity to snag pictures of a few new doors. Of course, after I’ve seen everything there is to see at the show, I stop for lunch at The Molly Wee Pub. I know you’ve seen those doors before, but I can’t resist.

My friend Sharukh recently asked me if I wait until there are no people around before taking a picture of a door. I do try to get the doors without people, but in New York, that is often a fruitless adventure, when in that city you take what you can get.

Most of the doors are just random interesting doors, but as things are settling down, I had time to look up a couple of them and I found some interesting tidbits.

One of the photos is the back entrance to the Helmsley Building. This building started out as the New York Central Building – designed in 1913 and completed in 1929. The following is from the building’s website:

“Before the electrification of the New York Central Railroad in 1912–1913, the neighborhood north of Grand Central Terminal was one of open-air railway yards and tracks used by steam locomotives. The electrification and subsequent covering of the yards enabled the continuation of Park Avenue to the north and the construction of new buildings.

If you were to follow the link in the earlier paragraph about “taking what you can get,” you would find an earlier post of mine with rules for photography in New York. One of them calls attention to the fact that you never know what history might be associated with a building. While Leona Helmsely certainly was a colorful character and frequently in the news (the Editor reminded me that ‘The Queen of Mean’ even owned a local hotel in nearby Enfield, CT), if you go back several decades, there is also this:

Also in the gallery are doors to a few theaters near Times Square. These are currently Shubert Theaters, but they weren’t always. I found two that had interesting stories. Again, I’ve borrowed some information from the Shubert websites:

“The Lyceum is Broadway’s oldest continually operating legitimate theatre. Built by producer-manager David Frohman in 1903, it was purchased in 1940 by a conglomerate of producers which included George S. Kaufman and Moss Hart. In 1950, the Shuberts took ownership of the theatre, and have operated it ever since…

…When it opened, the theatre featured a state-of-the-art ventilation system: the auditorium was kept cool in the summer and warm in the winter as air was passed over either ice chambers or steam coils on its way into the theatre.”

Nearby, is the Booth Theater. I was attracted to this theater because of the corner door, but it actually has a bit more interesting history:

“Lee Shubert built the Booth Theatre in partnership with the producer Winthrop Ames. Named for the actor Edwin Booth (1833-1893), brother to the infamous John Wilkes Booth, the venue was actually the second New York theatre to bear this name. The first was built by Booth himself in 1869 on 23rd Street and 6th Avenue. Ames’s father had been devoted to preserving the actor’s legacy, so Winthrop’s decision to name this theatre after Booth honored not only the actor, but connected his own family’s interest with the actor’s rich theatrical history.”

This post is part of the fun weekly series hosted by Norman Frampton. If you want to join us in the celebration of doors-as-art around the world, head up to Norm’s place. Check out his doors and then look for the blue frog. Click on that tadpole and prepare to be amazed as you enter the gallery of doors.

There’s a lot going on here, and I like all of it. 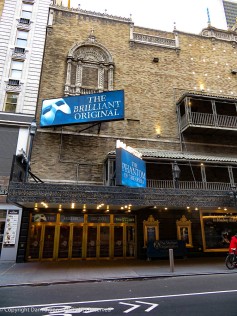 Round corner door. Does it get any better – well, if the doors were round. 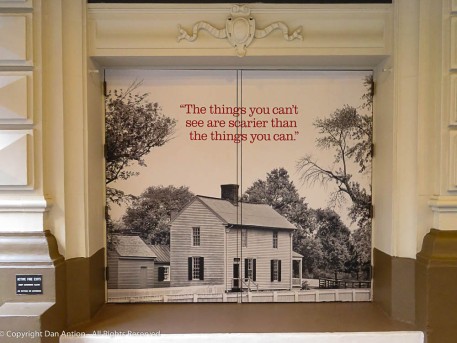 Advertising (on doors) for “To Kill a Mockingbird” 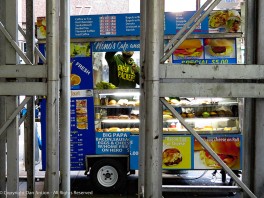 This one is for Mary! At least the Giant’s beat the Bears.

The Helmsely Building from the south side. 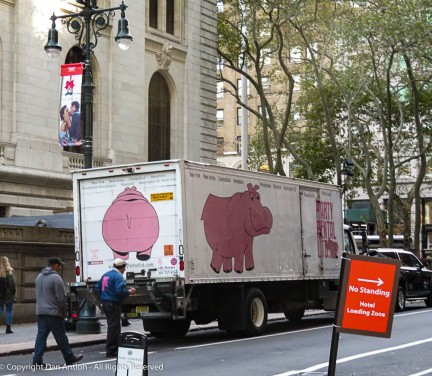 A large pink hippo from the south side ;-)

The Haier Building. From the website: “The building has recently gained fame after it was featured in the season finale of the 21st season of hit-reality competition show, The Amazing Race.” 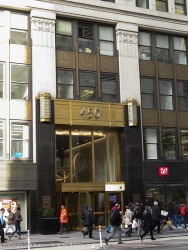 Nelson Tower – It was completed in 1931 and became the tallest building in the Garment District of New York. 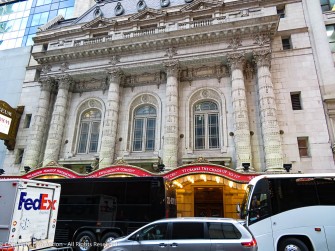