I know, I know, it’s the last day of 2018 and I’m supposed to recap the year that was and ponder the year to come. I’m not going to do that. OK? You see, at work, I’ve been busy annualizing my 2019 budget, writing a list of accomplishments and explaining the things that should have been accomplished but weren’t. I’ve also been articulating a plan for the next several years and clearing that with the folks who will be left behind to implement that plan. A review of 2018 here would feel like work – I come here to avoid that, so I will.

I didn’t buy a new car like I thought I was going to. That ended up being a mistake, as my current car required some costly end-of-the-year repairs that could have been someone else’s to make.

The Pirates, Penguins and Steelers didn’t make me exceedingly happy, but I remain a fan of all of them. That goes for the Pitt Panthers and the WVU Mountaineers, as well.

We didn’t achieve world peace, solve the problems with race relations, immigration, student loans or address pay equity and other respect issues regarding women. And despite how well they keep telling us the economy is performing, there seem to be a lot of poor/nearly poor people in this country.

On the lighter side, MuMu wasn’t brushed often enough, Maddie didn’t walk or sit enough and MiMi did NOT get enough sleep.

On a positive note, the squirrels did not starve, and the US did not impose tariffs on Mexican beer.

In the ‘technically-correct-but…’ category, I did not fall of the roof I was replacing. I did fall off a ladder that slid down the side of my workshop. I wasn’t hurt, and although the ladder knocked another ladder and some staging into the spot where the Editor had been standing; she escaped unharmed. We enter 2019 with high praise for our guardian angels and promise to try to give them an easier year.

Deleted from the list in May was the fact that I didn’t need emergency medical treatment. Six stitches took care of that claim.

I did not fly on Southwest Airlines in 2018. They treated me badly in 2017 and I vowed to boycott their airline for a year, if possible. I managed to find lower fares on other airlines, and I happily took the train to their east coast hub city of Baltimore. Take that SWA.

As for 2019, I’m not planning to change anything here at No Facilities. I will enter the next chapter of my career in November, but I don’t have comprehensive plans at this point. Let’s just say, I don’t think I’ll be bored. Since my travel schedule will be limited by comparison to previous years, my only flight on Southwest might be so that I can use my frequent flier miles before they expire. 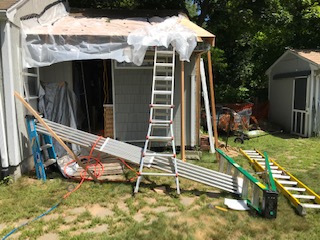 The Editor had been standing next to the green step ladder before the yellow ladder fell.

Hartford from the north end of Great River Park (on the Bulkeley Bridge). 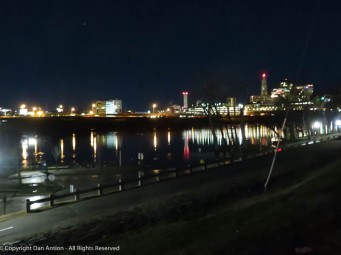 The south end of Great River Park is flooded. Parking lot is closed. 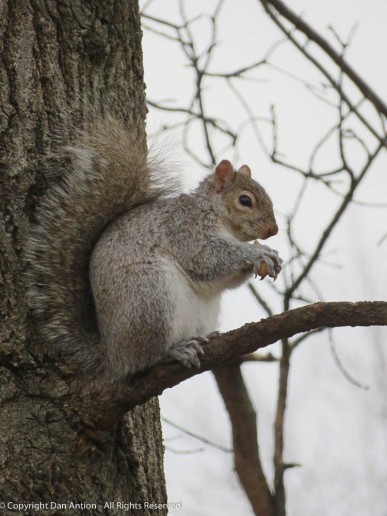 “Thanks for the peanut. These are great!”

“Just because my foot is out there, doesn’t mean you can grab it.”

We haven’t had many sunny days. MiMi has claimed the bedroom shelf on this day.

“Hi. do you have any peanuts today?”

“No one has brushed me since forever!” 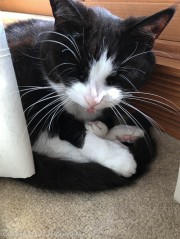 We’re back from our walk.

“Thanks for going for a walk. I’m going to take a nap now.” 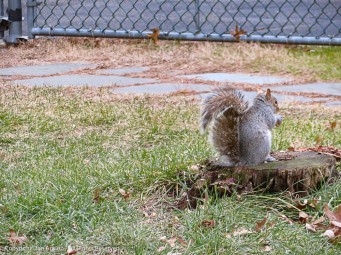 “I’ll eat this one and maybe come back for seconds.” 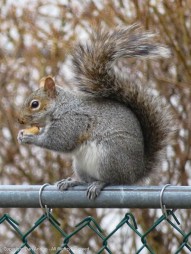 Smokey found a peanut in the leaves and ground cover.

87 thoughts on “Maybe Next Year”