Saturday’s post about the book “Ocean Station” had originally been scheduled for today. It’s not like it caught me off-guard (no pun intended), as I made the decision to tell that story from the bar the previous week. That’s how it goes with SoCS, you say something, and you get committed and if you edit that something out, Linda G. Hill calls John W. Howell and the next thing you know, Tiny is nailing a list of 10 things not to do when participating in Stream of Consciousness Saturday to your front door. Anyway, here I am on Sunday, looking at a forecast calling for snow overnight and during the day, and not having a thing for my blog to wear.

I mention that because it’s been a theme lately around the corner of WordPress that I hang out in. I think the sense of urgency that accompanies January 1st has worn off, and we’ve fallen back into our comfortable patterns of “there’s always tomorrow” – which essentially is true, until it isn’t, but we don’t worry about that. So, I don’t have a post to push ‘publish’ on (but I do have some alliteration going) and yes, I know it should be “on which to push publish” but I read somewhere that the Grammar Lords and Ladies are easing up on that whole ‘never end a sentence with a preposition’ thing.

In case you’re wondering if I am suggesting that Lord Google’s opinion is more highly valued than that of The Editor – no, no I am not. I’m just saying that “I read it somewhere…”

I do have several draft blog posts sitting in Trello, waiting for me to dump them into Word, add a cup of water, two eggs and bake until a toothpick can be inserted and withdrawn with no letters attached. However, I’ve already opened a beer, had a snack, and The Editor is about to make some dinner and the Penguins are on TV. That rarely happens here. No, not the Editor cooking thing, not the open beer thing, the Penguins. The only reason they’re on is because they’re beating the New York Rangers. We get Boston and New York sports here in Connecticut, since, when it comes to sports, we got nothing.

When it comes to a lot of things in Connecticut, we got nothing. As of today, we don’t have any toll roads, but today’s paper says we probably will in the near future. Our new Governor said, a long time ago, that he was in favor of tolls. People didn’t like that, so when running for office, he said he was only in favor of tolls on tractor trailer trucks (ooh, more alliteration). Then he won the election, looked at the balance in the checkbook and said “whoa, we need us some tolls” – on everything that moves.

Technically, we could implement tolls in a way that would make it easy on Connecticut drivers. We could not collect tolls within, say 25 miles of your house, or between your house and the nearest train station. It’s all computer controlled these days. We could do anything we like.

We’ll collect tolls on everybody. That’s because money is the Crack of politics. Once the governor takes the blame for suggesting tolls, the rest of them will gather round that idea like moths at the porch light. Before the end of June, we’ll be planning to collect tolls on every major road in the state. It might work. We might make some money, or we might force some of those trucks to continue east on I-90 through western Massachusetts. That end of the MassPike is free. Oh, they (MA legislators) will fix that, but not right away.

Anyway, between the snowstorm that’s coming, the ice the Penguins are skating on and the ice that’s still covering everything outside, I’m thinking about frozen stuff. The gallery includes a lot of frozen stuff and cold stuff. It’s February, it’s what we have.

“Oh, did you want to get a picture of this? I just smelled something interesting, sorry.”

The water is still flowing, but than can change quickly.

I tried getting a close up of this guy, but my camera insisted on focusing on everything else but the bird.

Rushing water can avoid freezing but not a still pond.

This is the Farminton River as it makes one of its final turns toward the Connecticut River.

Smokey is on the move in search of a peanut.

The squirrels aren’t heavy enough to break through so they’re walking on a frozen world.

“Maddie, that’s ice. We need to move into the street.”

I’m trying to pull Maddie into the snow. That looks like water, but it’s frozen.

“Hi. I saw you behind the curtain. We’re kind of cold and hungry. Hint, hint.”

MiMi loves being on this shelf in the sun. 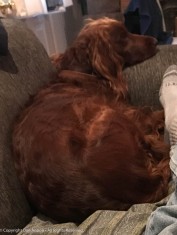 After our walk, we needed a little R&R.

“Yes, Maddie. that’s home, but that’s ice on the sidewalk. Let’s stay out here on the street.” 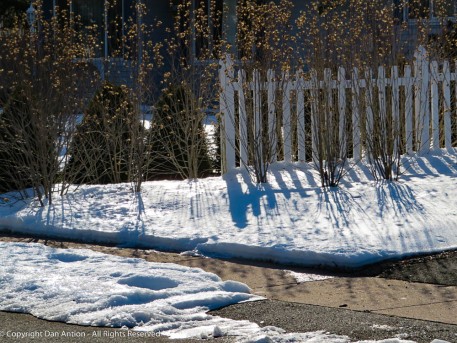 I like the bright sun reflecting off the snow and the shadows. 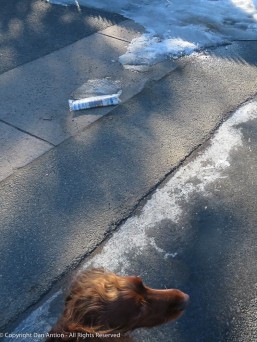 Maddie’s park is a giant sheet of ice.