Doctor, It Hurts When I Do This

Remember that old joke? Well, computer technical support is like that, sometimes. This week, I thought I’d try to combine my on-going technology journey (the one inspired by Pam’s Luddite Wannabe post) with an update on the mysterious case of the WordPress “Like” button. Yes, we’re still working on that.

One of the chronic problems in systems development is not understanding all the things that can go wrong (or right) with a process. Although I’ve written my share of software, the bulk of my career was spent designing systems and managing the development process. Communication skills are super important for these tasks, because you’re expected to translate between people who don’t want to know anything technical and people who spent their years in college making fun of business and accounting majors.

I once worked for a man who, in trying to complement me, picked on my staff:

“You’re different than most software developers.”

“I can talk to you. You have very good communication skills.”

“It’s necessary in this job.”

“Yeah, but your staff doesn’t have those skills, what’s wrong with them?”

“You’re talking about people who made a conscious decision to work with machines instead of human beings.”

“At least they’re good at that.”

Picking on IT people and their social skills is like shooting fish in a barrel. There’s an old joke about the subject:

“How do know if the IT guy you’re talking to is an extrovert?”
“When he talks to you, he looks at your shoes.”

But, picking on IT people and their social skills is also unfair, unless you’re also going to pick on the business folks for not being able to gain more than a surface-level understanding of the computer on their desk – the one they probably use 6-8 hours a day – or the software running on that computer.

I have spent tens of thousands of hours talking to people about their job. I can’t remember the number of times I’ve started conversations by asking someone to explain their job to me. Then, as I watched them do their job, there were a gazillion sentences in the form of, “can you tell me what you just did?” and “why did you do that?” People do things – all the time – day after day – without realizing that they are following a logical workflow and/or making value-base decisions. Computers can do those things, easily, but they have to know all the steps in the workflow, and they have to understand the complete range of values and the results of all those judgements. Well, the programmer writing the software has to know those things. Next week, I’ll share some comical-ish results of not knowing enough.

My interaction with the WordPress Happiness Engineers to-date, has largely been an exercise in figuring out when this error occurs – what are the circumstances surrounding the inability of the “Like” button to load? Here’s what we know, so far:

It only happens on sites with custom domain names. I.E. https://noFacilities.com as opposed to https://nofacilities.wordpress.com

It happens often in Firefox, occasionally in Safari, but it doesn’t happen in Chrome or Internet Explorer.

It might be associated with blogs that combine a mix of secure and insecure elements. An image referenced like: http://image.somewhere.com – (http, not https). Chrome and IE don’t consider this issue to be the problem Firefox and Safari do.

It doesn’t appear to be related to any add-ons or extensions (because I eliminated all of those from my instance of Firefox).

After determining those fundamental bits, the engineers were able to recreate the problem.

WordPress is what is known as Open Source software. There are people working on it who are employed by Automatic (the parent company of WordPress) and there are programmers who volunteer their time to developing and maintaining WordPress. The code (the lines of programming language) is stored in a common, Internet accessible code-library know as github. It may not come as a surprise to you to know that I have a github account – they’re free, it’s not like joining a country club. My account did come in handy, because once the Happiness Engineers could recreate my problem, they entered it into github as a “Bug.” Now it will get some attention (it already has) and, hopefully it will be fixed. I can login, read the comments and reply to questions. This saves the WP engineer the time of reading, asking me via email, and entering my answer.

The solution might come in the form of a software fix. It might be in the form of a “work-around” – “do this, this and this if you want the Like button to load,” or, as the Doctor in the punchline to the joke in the title says: “Then don’t do that!” and it might be given to the open source developers at Mozilla (FireFox) to solve from their end (I am looking into that area as well).

Part of my “excellent” communication skills is knowing that I have to wait for those answers. I’m sorry to report that the problem still exists, but I do feel they are making progress. By the way, I also can’t remember how many times I’ve said that during my career.

2) In recreating this problem, the engineers have visited Cheryl’s blog and attempted to Like and/or comment. They may visit yours (sorry, I had to tell them where I’m having problems) so you might see a comment that simply says “testing” or something like that. 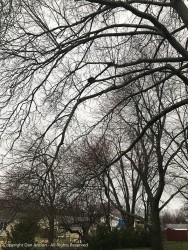 Can you see Smokey? 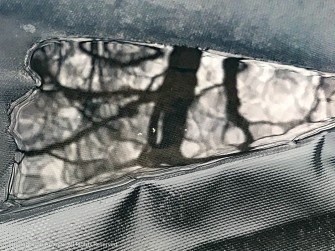 Can you see Smokey in this picture? 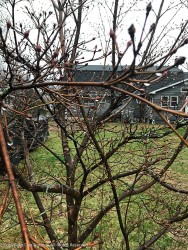 Everything is wet. The rain isn’t over, but Maddie and I are going to try to squeeze in our walk. 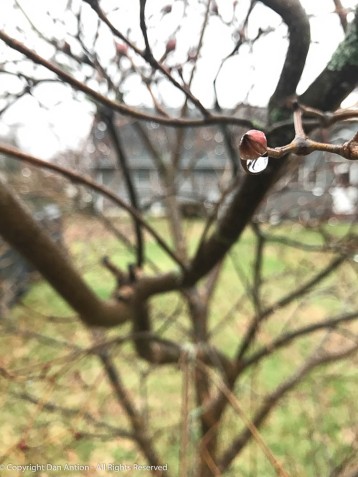 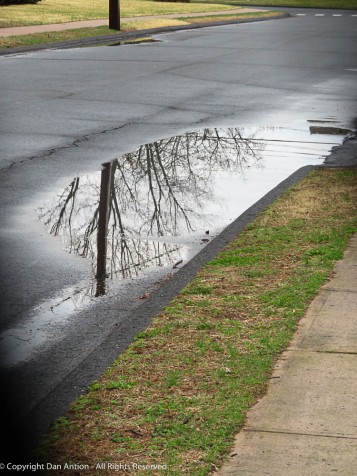 We had about an inch of rain over night before this walk. 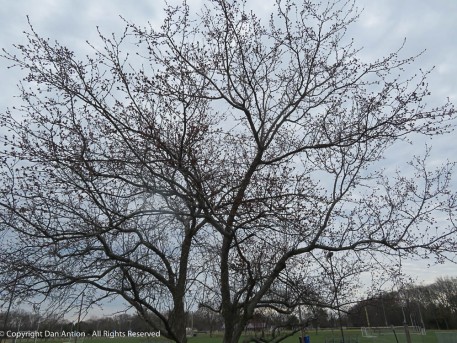 I think this is an apple tree. 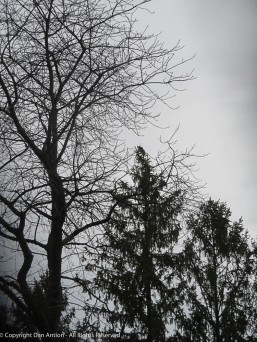 “I can see the ball field from here.” 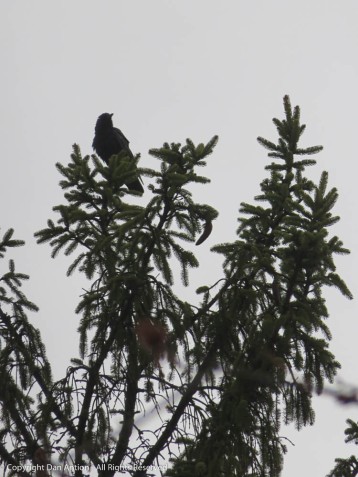 This guy was talking to a crow at the very top of a tree across the street. 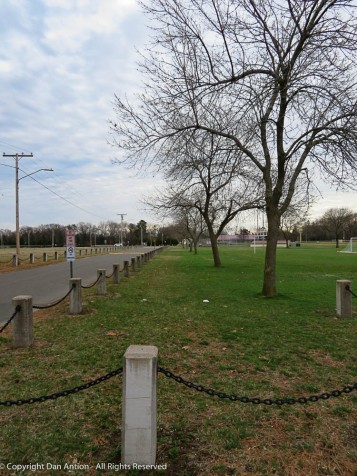 Maddie’s park is turning green and starting to bud. 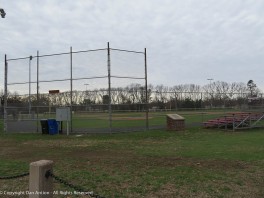 The ball field is ready for the birds. 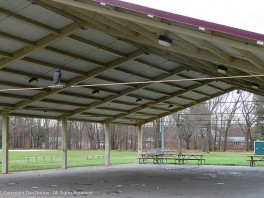 “Let’s go fellows, those crows are only about a block away. We need to get some practice in.” 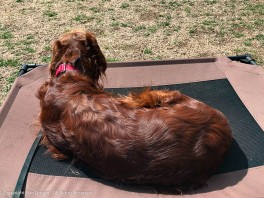 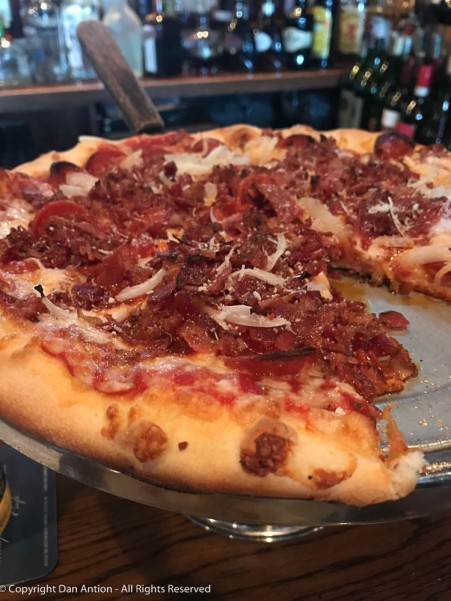 This was Saturday’s free pizza, as ordered – pepperoni, bacon and onions. 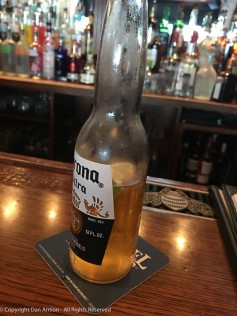 Of course, you can’t have pizza without something to drink. 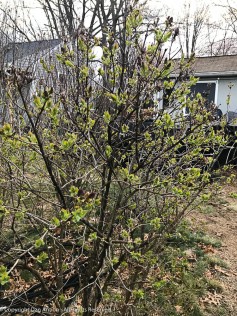 Lilacs are starting to bud. 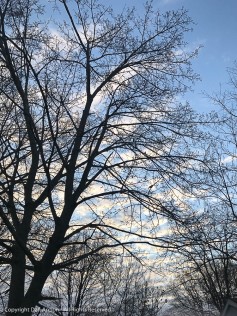 This was from Sunday morning. 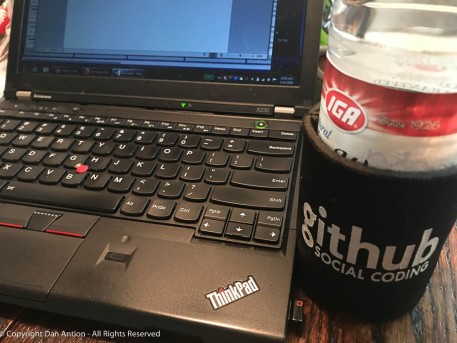 Been there – done that – got the beer cozy. 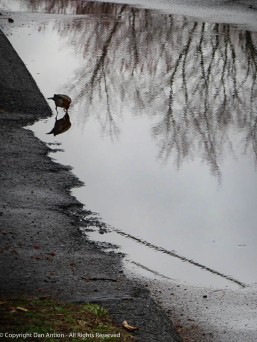 Getting a drink before the big game.