Goodbye to the little monkey and welcome the long pier. It’s time to turn over a new badge.

As I mentioned over at the bar on Saturday I am working on the last segment of the garage facelift I started last year. Since the “garage” is really the merger between a relatively large garage and a somewhat smaller workshop, it has six distinct sides. Four that make up the front, back and two sides, and two that from a 6’ x 12’ (1.8m x 3.6m) indentation in one corner. The longer of the two walls in that corner is the one with the entrance to my shop.

The workshop entrance posed two significant problems for me. First, since the wall is set back, the roof is lower than the garage roof. In the winter, snow tends to drift up against the higher sidewall of the garage and, what may seem unfathomable to those of you in warmer climes, that snow has to be raked off the roof. The problem – no, raking snow off the roof isn’t a problem, we have tools for that – the problem is that it falls to the ground in that corner. When a big pile of snow falls from a height of about 10 feet, it packs itself into an iceberg (inside a tight corner) when it lands.

To solve this problem, I extended the roof over the workshop so I can rake the snow to a place in the yard where I can get at it with my snow blower.

The second problem was the entrance. The door is about two feet off the ground, and the path in and out was via a steep wooden ramp. If the ramp was wet or covered with snow, it was absolutely dangerous. I had installed small treads to help get a grip, but most of those had broken over the years – that ramp had to go. I decided to replace the ramp with a little deck. It’s about 40” (~1m) wide and 11’ long. From there, I can build one nice-sized step to the ground.

I framed the deck last weekend, but I’m not ready for deck boards yet. I won’t install those until the siding is up (for reasons that will send this well over the 500-word mark).

After I installed the support beams and what will be the floor joists, I was planning to move on to the work I have to do on the walls. Unfortunately, I was still entering and exiting the shop, only now, I was tripping over those joists.

I found some scrap plywood and I decided to put enough down to make a functional landing pad, and to prevent me from tripping. I took the leftover pavers that had been laying against the garage and formed them into two steps (actually The Editor’s idea). This was simply for the sake of safety. 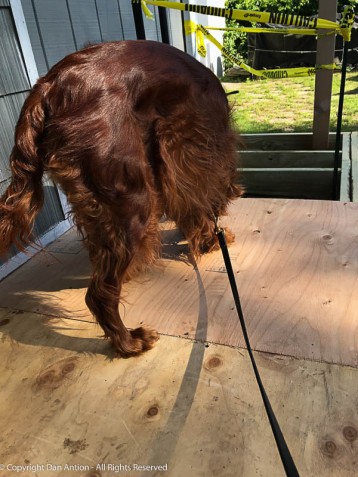 “I think I could get used to this.”

The above sequence of pictures is what happened. I texted a couple of those to The Editor, and she brought me a lawn chair and Maddie a cushion. Then she said:

“It was nice of you to build this for Maddie.”

This post is part of Linda G. Hill’s fun weekly series One-Liner Wednesday. And, given the time of the year, it’s also part of Just-Jot-January. If you have a one-liner, I’d encourage you to join in on the fun. You can follow this link to participate and to see the one-liners from the other participants.

The gallery has a few photos of the construction, a few of the deck’s new owner and a few of the sights we see from the deck. Yes, it didn’t take long for Sammy, Samantha, Smokey and Chippy to realize where we were hiding. There’s talk (joking) of adding a mini-fridge. 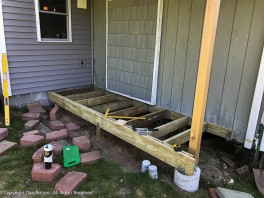 One board left to go.

An accident waiting to happen. 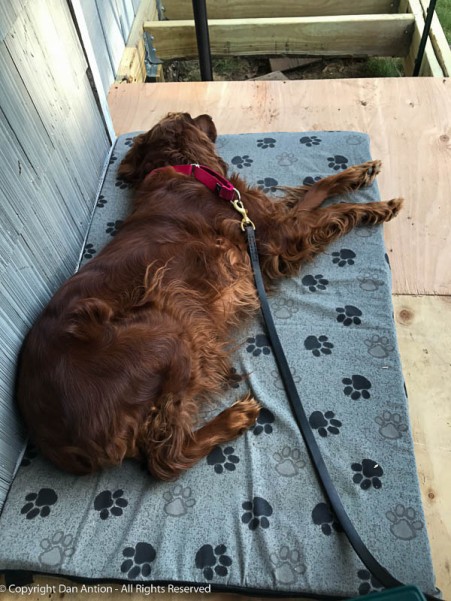 “Ahhhhh, yeah, this is better. Thanks mom.” 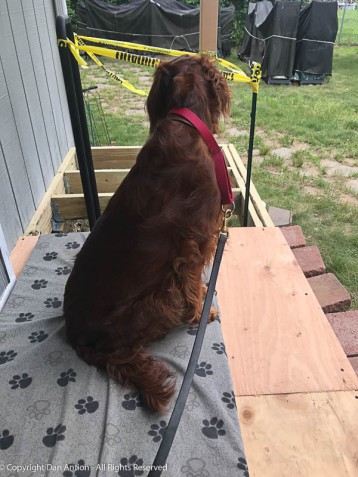 “I think Chippy is running around over there.” 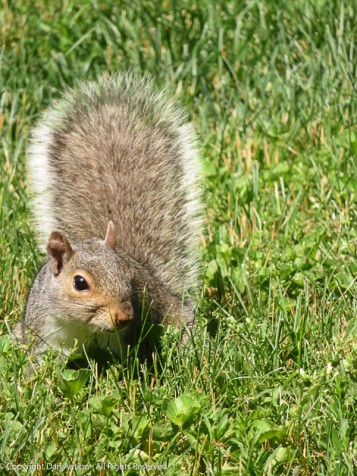 “I’m awake. I was dreaming about a peanut.”

This is not what this was ever supposed to look like.

I think the squirrels have found us. 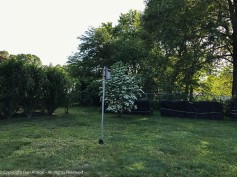 “Hi there. I see you guys have moved.” 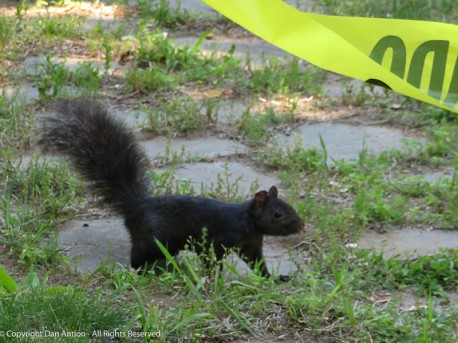 Smokey found us after a few minutes.

“Thanks for the peanut!”