It’s time to visit the bar and try to incorporate my and my buddy’s conversation with Linda G. Hill’s Stream of Consciousness Saturday prompt. This week, Linda says:

“Your Friday prompt for Stream of Consciousness Saturday is ‘instructions.’ Write instructions for anything you know how to do. As detailed or as rambling as you’d like. Enjoy!”

If were having a beer, you would be wondering about something.

“Your buddy’s not here, yet Dan. Do you want to start without him?”

“Don’t say that around David.”

“Look, I know he hates the phrase ‘no problem,’ because of Brad, but sometimes things really are no problem and he has to deal with it.”

“David, you’re late. You have to deal with two things: One, you’re paying today, and two, Cheryl used the phrase ‘no problem’ and…”

“…and it’s going to be NO PROBLEM, if you catch my drift.”

“Cheryl, I read you loud and clear.”

“Good. Do you want something to drink?”

“As long as I’m paying. I’ll have a splash of John Howell’s Bourbon and the usual setup.”

“I was reading Teagan’s story.”

“Only now? It’s been out there since midnight.”

“I’m not usually up at midnight.”

“The way you pound down these bourbons, I’m surprised you don’t fall asleep in your pizza.”

“No offense, David. Here’s your bourbon, your ice and your seltzer.”

“So, Dan. Now that Teagan’s story is done, I have a question for you.”

“And that would be?”

“How did you get pictures from the late fifties and early sixties? Do you have a time machine?”

“Uh huh, I have several antique stores I like to visit, and I have PhotoShop.”

“Huh? I get the antique stores, and I knew you could use PhotoShop to make people look better, but how do you go back in time?”

“Remember, I explained how I had to remove modern artifacts from the picture Teagan used for Birdie’s house in the third chapter?”

“I do remember, but I was just nodding along, pretending to understand. I mean, how do you remove a recycle bin from a picture without leaving a recycle-bin-sized-hole in the image?”

“PhotoShop has a Magic Wand tool, that lets you select objects by sensing where the boundaries are. You can tweak the selection to include every last bit of the bin. Then, you can delete the selection and PhotoShop will fill in the ‘hole’ with an extrapolation from the surrounding parts of the image.”

“It is. It doesn’t always work well, but there are other tricks.”

“Cropping, like with the fan Teagan used for her Jazz Age Wednesday post. That fan was in the middle of several other items.”

“Selective copy and pasting. I had an image that I don’t think Teagan was able to use, of a firehouse that was Engine Company Nine.”

“Nine did seem like a recurring thing in that story.”

“It was, and I was trying to stay ahead of Teagan. So, I took the picture, but I had to remove some air conditioners and two handicapped parking signs.”

“That’s right, they didn’t start using those until the late sixties.”

“You boys want another round?”

“Well, I want another beer.”

“Can you just top this off, Cheryl, I’m sipping slow today.”

“So, to remove those things, you used that edit feature?”

“It worked for the signs, since they were on a brick wall, but the air conditioners were in windows. I removed them, and then copied and pasted bits of the upper sash into the area where the lower sash would be.”

“That sounds hard. Was that the hardest thing you did?”

“No, that was the school bus.”

“The one with the guy wiping his face with the dirty rag?”

“I thought you were just really lucky to get that.”

“No, that school bus was on the road in front of me in Hartford.”

“What? Did you get out and take a selfie?”

“Here’s your Corona, Dan, and here, David, I’ll top that off on the house.”

“Well, makes up for that earlier bit.” 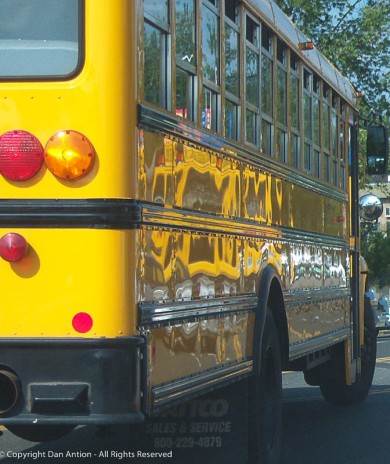 My selfie – yes, I was trying to conceal my identity.

This is the “smudges” layer that was added to the handkerchief to look like oil stains.

“More than enough. Thanks. So, Dan, exactly what did you do to get near that bus?”

“I took a selfie of me, wiping my face with a red bandana.”

“Yeah, yeah, how did you get next to a bus in Hartford?”

“With that magic wand thing?”

“Yes, and then I adjusted the size, relative to the bus, and pasted me in next to the door.”

“It was fun; I had a blast. I use these tools at work but I never get to anything fun.”

“So, you enjoyed this project?”

“Almost as much as the pizza you’re about to order for us.”

There are some other examples in the gallery, along with a few of the usual suspects. The final episode of Brother Love is live on Teagan’s site. If you would like to see a beautiful bit of valuable advice, I would encourage you to take a few minutes to look at Cheryl’s post from yesterday.

This is the before (the original) photo of the firehouse. Note the window A/C units and the Handicapped Parking signs.

The after-image for Engine Company Number 9

Those are all police cars in Great River Park. It’s OK, they’re setting up for a city-wide event this weekend. 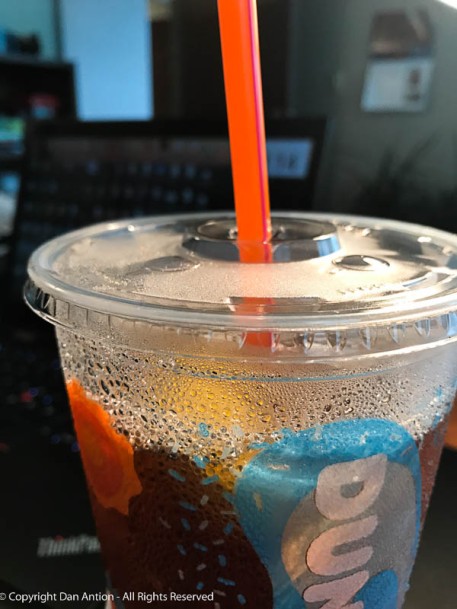 Hot enough to make me switch from coffee to iced tea.

The uncropped version of the antique fan. 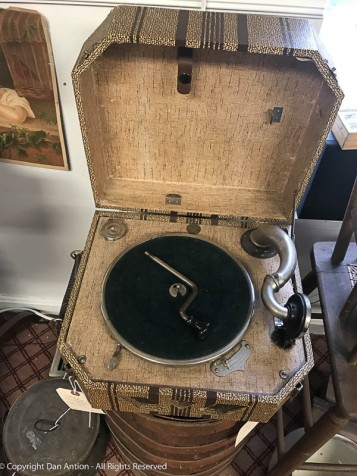 This is one version of an old portable phonograph. I tried to alter this a bit to hide the price tag.

This is one of my photos that Teagan did a little “post production” work on. 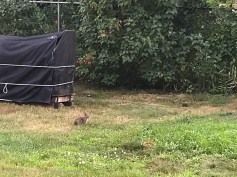 Bunny bun. Getting ready for dinner. 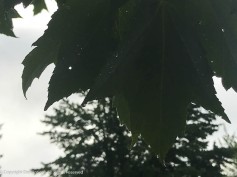 It rained overnight. If you look closely, you can see some tiny water drops at the edge of the leaf.

That ball of fluff is MiMi. Presented as evidence that I’m letting her sleep.

It’s been too hot to sit on several days. However, when we could, we did. 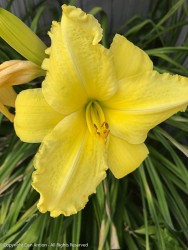 These guys seem to be enjoying the heat and humidity.

“I thought I left a wake up call for Monday.” 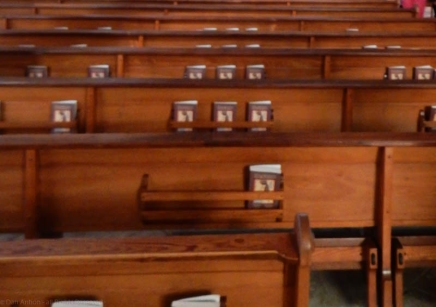 These were cropped out of the picture of the inside of the cathedral. 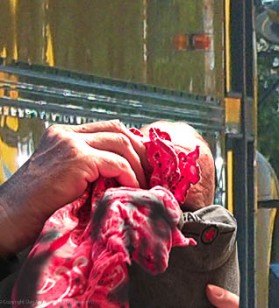