My Corona found its lime.

The usual suspects have gathered at the No Facilities bar, but Linda G. Hill has given us quite the challenge with her Stream of Consciousness Saturday prompt:

“Your Friday prompt for Stream of Consciousness Saturday is ‘astronomical.’ Use it any way you like. Have fun!”

If we were having a beer, I’d be happy to be in a familiar bar.

“Hi Cheryl. It’s good to see your smiling face behind the bar.”

“You act like I’ve been gone for months, Dan. I just missed one Saturday.”

“Yeah, but the one you missed was in between two business trips. I’ve been dealing with Cheryl wannabes for ten out of the past fourteen days.”

“Well, then, let’s get you fixed up with an ice-cold Corona and a juicy slice of lime. Where’s your buddy?”

“And, I thought I was going to be first today. I drove by and I didn’t see your car in the lot.”

“There was some activity in that lot, I decided to park in the slice of chaos that is the upper lot.”

“Activity, what kind of activity?”

“A Volvo wagon was backed up against the bed of a pick-up truck and material was being moved from one vehicle to the other.”

“In the parking lot of a bar? Who does that?”

“Here’s your beer, Dan. Those guys were in here for lunch. They met here to exchange some stuff from a sale on eBay.”

“I think one of them was from Vermont, the other was from central Connecticut.”

“Vermont, that explains the Volvo.”

“I wish I knew what explained the two-dollar tip on a thirty-eight-dollar tab. David, would you like bourbon or wine today?”

“I think I’m in the mood for something lighter today, Cheryl. What’s that Truly Seltzer all about?”

“It’s a hard seltzer. We have the unflavored on tap, but I can mix it with just about anything.”

“How is it straight from the tap?”

“That’s a ‘no’ Cheryl. Just pour some Absolute in a snifter and add a splash of good seltzer.”

“That will taste better – but cost a bit more.”

“The sky’s the limit, Cheryl, Dan is picking up today’s tab.”

“You are, my friend, and you’re going to spring for an order of Reuben Egg Rolls. Like I said, I’m in the mood for something lighter today.”

“OK, here’s your vodka and seltzer, and I’ll get an order of Reuben Egg Rolls right in.”

“Yes, thanks Cheryl and I’ll try to do better than the eBay crowd when it comes to your tip.”

“You couldn’t do worse.”

“I don’t know, David might be flirting with my limit.’

“Hey, it’s not like I’m sticking you with an astronomical bar bill.”

“Speaking of Astro-nomical*, what did you think of…”

“Do NOT go there, Dan. I do not want to talk about baseball and what was and wasn’t done at the trade deadline. Besides, what did your team do?”

“We kept a closer who never gets to close, cause we’re never in the lead, and we traded a pretty good hitter for a box of Cracker Jack. But the Pirates, stink, it’s not like they’re playing with hopes of a wildcard spot.”

“I don’t think the Red Sox are, either. But, let’s not talk about baseball. Were you on the road again?”

“AMTRAK? Or did you finally wise-up and fly?”

“Seven hours, rolling on the rails in a comfortable seat, with Dunkin Donuts coffee, AC power and free WiFi.”

“Seven hours? You can fly there in an hour and a half.”

“Still, it would save you a couple of hours, Dan.”

“But I wouldn’t have enjoyed any of the time traveling. I enjoyed every minute on those trains.”

“The part that would bother me would be the return trip. When I’m coming home, Dan, I just want to get home.”

“It’s only six and a half hours coming home.”

“What, do they take a shortcut?”

“No, I take the Vermonter home, it doesn’t make all the same stops.”

“Here are the Reuben Egg Rolls, and why are you talking about Vermont, Dan? I’m trying to forget those people.”

“I was just talking about the train I came home on. It’s one of AMTRAK’s named trains, The Vermonter.”

“Now that you mention that, Dan, didn’t that use to be The Montrealer?”

“It was, David, and, if we’re lucky, it may change back to The Montrealer in the next year or two.”

“Riding the rails, followed by a doorcursion and some Canadian beer. What could be better?”

This attempt at SoCS was not entirely successful. It was only after I finished that I realized Cheryl never brought David his vodka – editing was required – the man was parched.

* For those unfamiliar with baseball in the US, Wednesday was the deadline to trade players between clubs. It is widely thought that the Houston (Texas) Astros made a trade, right at the deadline, that gives them a good chance to   make it to the World Series. 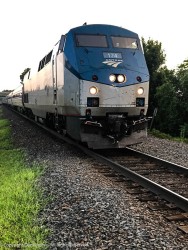 My ride to Washington, DC is here. 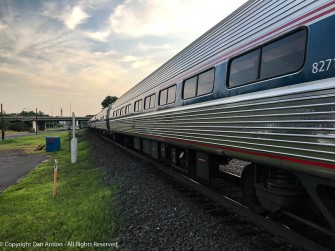 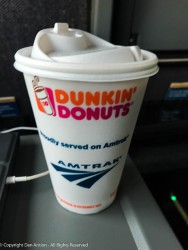 It doesn’t get any better than this, Power, WiFi and Dunkin’ Donuts coffee. 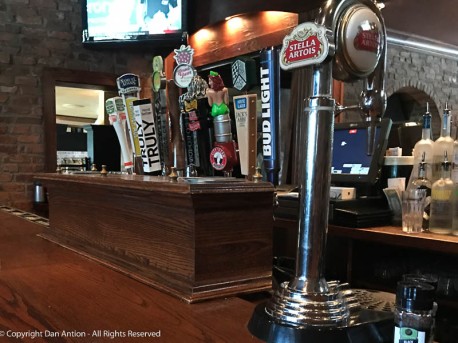 My Corona found its lime. 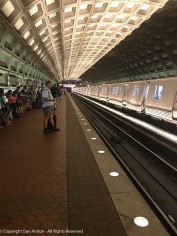 I’ve been on subways in many cities, but the DC Metro stations are my favorites.

This would give The Editor pause. A long escalator under and through scaffolding.

Perfect timing. That’s my train to Silver Spring pulling in as I’m heading down to the platform.

I love this old stone arched viaduct along the Northeast Corridor. 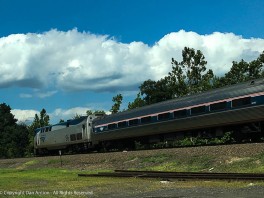 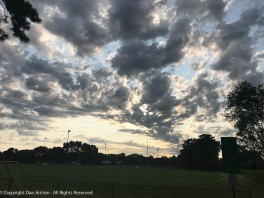 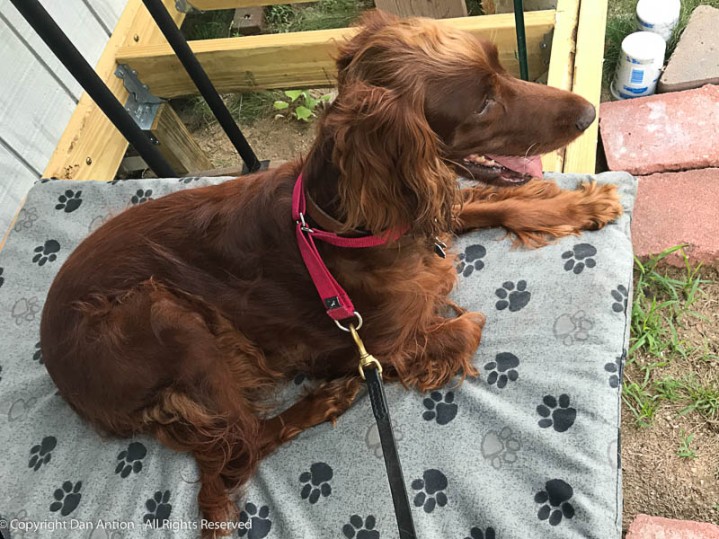 She does seem to enjoy this new place. I guess it’s not the temporary solution I imagined.