They are milling and paving the highway I use to get to work in the morning, and the entrance ramp that I use is closed. The highway leads to two of the three bridges I can use to cross the Connecticut River, so I’ve been taking an alternate route. It isn’t the treasure trove of doors it might have been, because I take the southern half of this route home at night – you’ve seen those doors. I also had to run to errands today. One took me to a new boring door – new construction, what can I say – and an old favorite. You’ve seen the old favorite before, but I’m sharing it again.

This coming weekend is Labor Day in the US, and I’ve extended that weekend a bit so that I can get started on some steps I have to make. I’ll explain that in greater detail, soon. For now, just a few doors from the alternate route. I’ll explain them in the captions.

Thursday Doors is a weekly blog hop hosted by Norm Frampton. Every Thursday, Norm shares a few doors he has collected. In addition, he invites everyone else to share doors at his place. Well, we just go there and let him know where our doors are, but you get the picture. Actually, if you go to Norm’s place, you get hundreds of pictures. Of doors. If you have pictures of doors you want to share, be sure to visit Norm and let us know where to find your doors. We will stop by at some point.

I know, there isn’t a visible door, but there has to be one and, you know, ice cream. We had a Dari Delite in the small town I grew up in. 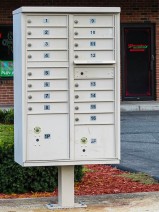 Tobacco farmers are harvesting their crop and beginning the drying process.

The tobacco is strung on long rails and suspended in these barns. The side slats are opened to promote airflow. If necessary, they add heat from propane burners.

Tobacco barns have many openings, including several large doors, 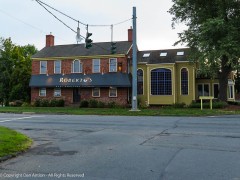 This restaurant closed about three years ago and re-opened recently as Roberto’s The door is nice, but I love those windows.

St. Philip Church – one of the more modern churches that still has interesting doors.

Brand-spanking new doors at the car dealership. They moved here about a month ago. Tile floor in the service department?

The nicest door at the dealership. “Do not close door with hand” – automatic, don’t ya know.

East Hartford Community Cultural Center – this is waht towns around here do with old schools. 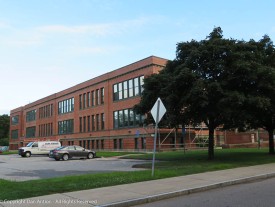 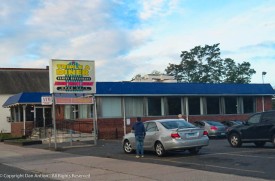 Back in the early 80s. we used to gather here for a late-night breakfast after a Friday night celebration.

My favorite lumber yard. We have some steps to make.

78 thoughts on “Detours and Errands – #ThursdayDoors”