Today is Labor Day in the US. The workingman’s holiday. According to some, “A tribute to the contributions workers have made to the strength, prosperity, and well-being of our country.” I’m not sure whom I should thank.

Labor Day is the first holiday I was ever paid for. A whole day’s pay while I was walking around Far Rockaway Beach in Queens, New York. I remember seeing the Concord take off from JFK. That was 42 years ago. I had been working as a Programmer Analyst at a manufacturing plant of Burroughs Corporation for precisely five days. 30 days earlier, I had finished my education. Schooled in the science of Operations Research. That was on top of a degree in Chemistry I had been convinced I would not be capable of putting to good use. With my education and computer experience, I was deemed capable of designing systems and organizing projects of all sizes and shapes.

Burroughs had me installing a new payroll system.

I’ve mentioned before that that payroll system had to be in operation by January 1978. The limit of Social Security withholding had been increased to the point that the well-heeled among us would exceed $1,000 in total withholdings for the first time in history. The plant manager of our plant would exceed that limit – in January. His year-end bonus would put him over the limit.

Installing and testing that payroll system brought this naïve college boy face-to-face with the disparity between the wages of labor and management. As a result, I resisted working on a payroll system for the next 41 years. I’d rather not know. In addition to the order-of-magnitude differential, was the fact that the plant manager was gaming the system. You can read the details in this old post.

In that previous post, I referred to a woman who was a problem for the systems I managed. I called her Rosie Rework, because she repaired memory boards that had failed in the field and were sent back for repair. This was at a time when it was still less expensive to repair something than to throw it away. The Work Management System (one of the systems I maintained) measured the cost and value of the work performed in the plant. That system would one day highlight an inflection point, the point where shipping a new memory board would be cheaper than repairing the old one. At that point there would be no rework. No system problem. No Job.

Suddenly, I was learning what they didn’t teach me in business school. The workplace wasn’t just about widgets and workflows. It was also about people, the value they added and the cost they represented. Business always does the math.

I left Burroughs after one year. Not because of some moral dilemma, but because of the toxic work environment for those of us between the assembly floor and “rug row.” As you might expect, Burroughs offered many opportunities for computer professionals. These were paraded in front of me during my interview.

Unfortunately, the plant manager limited the availability of these opportunities. They required training he would pay for, but he wouldn’t directly benefit from that training. The opportunities the training would prepare us for didn’t exist in manufacturing plants. I was hoping to be able to transfer to the marketing office in Manhattan. We were all hoping for a transfer to one of the corporate offices. But training was denied, trips to conferences were cancelled and we were kept out of meetings with visiting executives. That made me and my coworkers angry and that made my work environment strangely similar to Junior High School.

I have been fortunate in the past 42 years. I never again worked in a place as bad as Boroughs. I was given opportunities to put my education to good use and I have enjoyed the respect and benefits of a challenging career. I designed and built systems that created efficiencies, improved accuracy and brought to fruition the features people had hoped for. Those systems saved companies money – mainly by reducing the number of employees. Maybe that tribute wasn’t meant for me.

Then again, maybe it was. In many cases, the people whose jobs I helped eliminate moved on to better jobs. We “systems people” take comfort in that trend, even as artificial intelligence and robots threaten jobs on a monumental scale. In theory, there will always be work to do. It just won’t be the work that was done yesterday. I have some thoughts on that, but I’ll save them for another day.

Today will likely be the last time I am paid to take the first Monday of September off. That’s OK. It’s time for the next naïve kid to pick up the pail and carry it for a while.

The gallery includes a few photos from the activity around here. 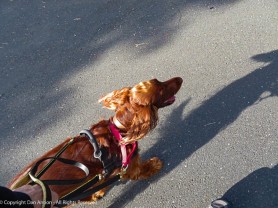 I might was well skip the ones with the shadows. 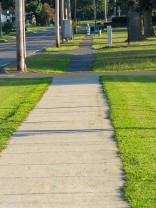 “Yes Maddie. I see her, but there’s no reason to bark at her.” 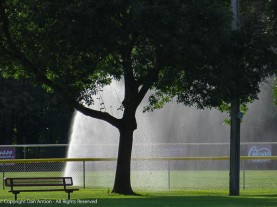 I keep trying to catch the sparkles in these sprinkler flows.

You can recall your trigonometry and calculate the angles or mock them up and draw them. 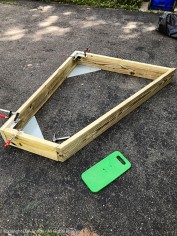 These steps run parallel to the driveway, which passes this door at an angle.

The decking will run perpendicular to the wall on this set of steps. 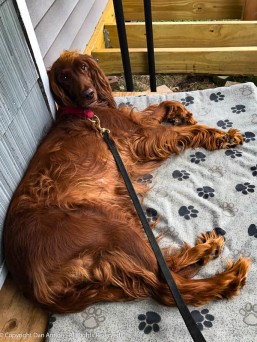