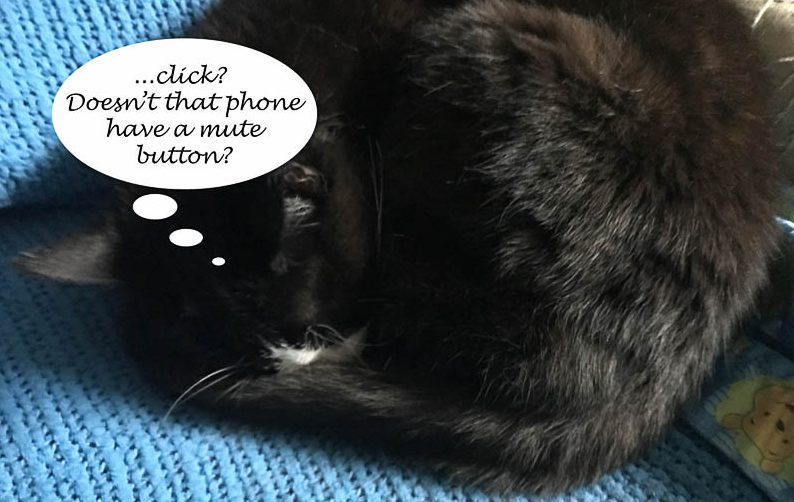 I didn’t want to wake her.

Once again, it’s time for Linda G. Hill’s mind-bending challenge to compose coherent text around an oddball theme in response to her Stream of Consciousness Saturday prompt:

“Your Friday prompt for Stream of Consciousness Saturday is ’blue.’ Talk about the first blue object you see when you sit down to write your post. Have fun!”

This one is easy-peasy.

If we were having a beer, you would be shaking your head.

“Dan, what on earth are you wearing?”

“The luckiest Iowa State tee shirt I own.”

“But you didn’t go to Iowa State. Shouldn’t you be wearing blue and gold for West Virginia, or at least blue and whatever color Pitt uses?”

“You know who else’s colors are blue and gold, Dan?”

“Hi Cheryl. Are you talking about LSU?”

“I’ll forgive you for that, since your color blind. LSU’s colors are purple and gold.”

“Ha! You’re right. And David was just getting ready to open a tab. I’ll take one blue and gold Corona with a hunk of lime.”

“I was just about to what?”

“I think you were just about to spend some money on my top shelf, David.”

“Well, since I’m buying, yes, let’s have some John Howell’s bourbon and a…”

“…a snifter of seltzer and a glass of ice. I’ll be right back.”

“Maybe by then, I’ll understand why Dan is wearing red and yellow today.”

“ISU doesn’t have a chance Dan. You should have worn a Steeler shirt – aren’t their colors the same as Iowa?”

“Iowa does wear black and gold, David, but I don’t want them to win today.”

“Here you go Dan, Ms. Corona and her lime. And the John Howell ensemble for David.”

“I’ll get you a couple cherries, David.”

“Cheers, Dan. Now, exactly what makes that shirt so lucky?”

“How often have you worn it?”

“Often enough to notice the trend, but I usually wear WVU or Pitt gear, if they’re playing.”

“But not today. Today, you abandon your teams in the name of brotherly love.”

“Not entirely, WVU and Pitt both played earlier. I was wearing blue and gold up until I showered.”

“Good to know you shower before coming here, Dan. Here are your cherries, David.”

“Thanks Cheryl. Has that shirt brought any big wins, Dan?”

“I was wearing it when they beat Kansas in basketball for the Big-12 championship.”

“Then what, you put it in the laundry for the NCAA Tournament?”

“I was not wearing it during their first-round loss to Ohio State.”

“Well, you have to know that shirt goes down today.”

“I think ISU has a chance.”

“Not unless Iowa plays as bad as that other black and gold team of yours did last week.”

“We’re not talking about that game.”

“Are we talking about food?”

“I’d split a small order of wings, Cheryl. If David is up for it.”

“You’re not hungry enough for ten wings? Did you have breakfast with John?”

“I thought you were going to let me know the next time you went to Allegro.”

“I got my haircut at six-thirty.”

“Thank you for not calling. Cheryl. Well have a ten-piece order of wings, but we still need two sauces and we need another round.”

“Why do you get your hair cut so early, Dan?”

“My barber was on vacation for three weeks in August. When he got back, he was all jammed up, so he started cutting earlier.”

“Who get up at the crack of dawn to get a haircut – on a Saturday?”

“There are lots of morning people. My barber’s schedule books from the earliest appointment out.”

“Here’s your beer, your bourbon, a splash of seltzer a few more cubes and the wings will be right up.”

“I’ll get you a couple more cherries, David.”

“You better leave her a nice tip.”

“I will, Dan. And, here’s one for you – don’t bet on that game. Your ‘lucky’ shirt is nothing more than a silly superstition.”

“Here are your cherries, David – and, it’s only silly if it doesn’t work!”

Today’s gallery includes a few “blue” images from this week.

While walking for coffee, we’ve seen them build two small retail buildings. This will be the third. 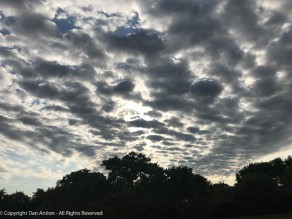 We were just about to start about a 1-mile round trip for coffee. 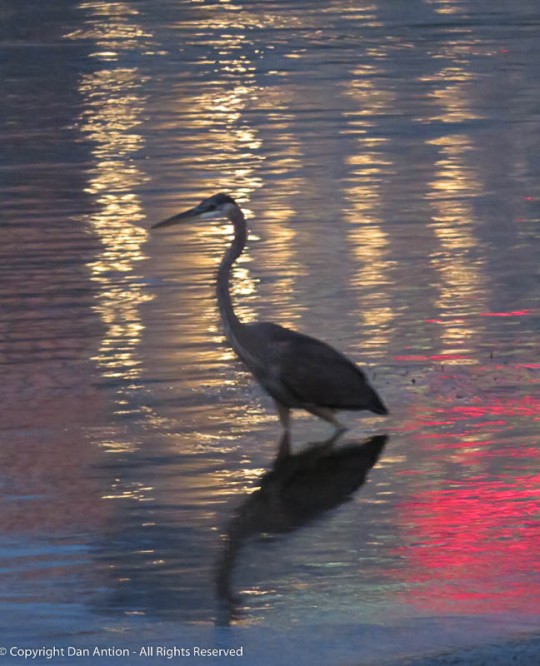 I think this is a Blue Heron. 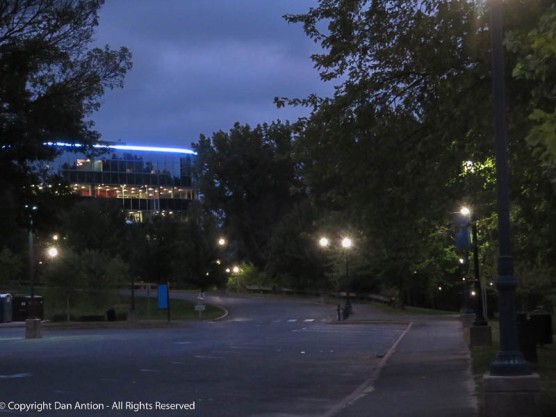 The building at the top of the levy has recently been renovated, including the blue light.

I don’t know what these are, but they’re pretty. 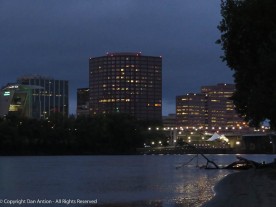 The sea monster in the morning. Not many people working in Hartford.

I’ve been going to work a little early and the sun has been rising later.

The Goldenrod has attracted the remaining bees. 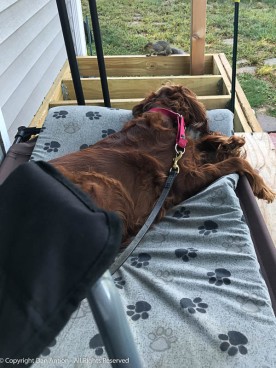 This is getting to be a regular scene.

This rig was parked outside Allegro. When you need breakfast, Allegro is the place to get it. 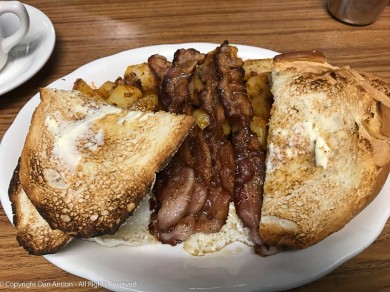 I’m sorry. this was yesterday’s breakfast. I am eating cereal today like many of you.

The Honeysuckle is blooming again. 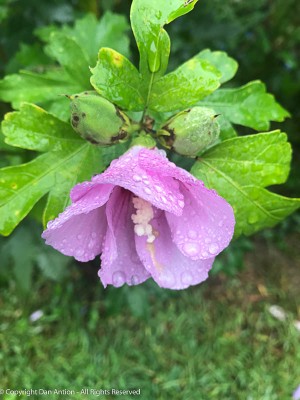 These guys got beat up pretty hard by the rain.

I have been trying to let MiMi sleep.