It’s time once again for Linda G. Hill’s Stream of Consciousness Saturday prompt. We’re going to handle this the usual way, I’ll take this to the bar and try to work it into the conversation. Let’s see what she gave us:

“Your Friday prompt for Stream of Consciousness Saturday is ‘oh.’ Use it as a word or find a word that starts with ‘oh.’ Bonus points if you start and end with ‘oh.’ Enjoy!”

To get those bonus points, I’m going to have to add the particulars to the intro. If we were having a beer, we might need a second round.

“Oh, that’s right, Cheryl said she was going to be off this weekend.”

“When were you going to tell me, Dan?”

“Some people call me Brad.”

“I thought you said you found it endearing.”

“A moment of weakness, I suppose. Will you two be having your usual drinks?”

“Well, I am going to have a Corona, in the bottle with…”

“…a hunk of lime. You’re predictable but at least you’re normal.”

“David, I think Brad took a shot at you.”

“Yeah, I’m going to let that pass. Skippy, I’ll have a glass of John Howell’s bourbon, a snifter of seltzer and a glass of ice.”

“Fill me in again about this bourbon.”

“Brad, David calls it John Howell’s because John suggested it. It’s Willett Reserve. And, if you want David to warm up to you, stick two cherries in it.”

“What are you two talking about, Dan?”

“Wasting your time, Dan. So, what has kept you so busy this week?”

“I got sucked into a minor crisis at work.”

“What? Why would you say that?”

“A little crisis-level work will make you feel better about retiring.”

“Here you go guys. One beer. One bourbon, a snifter of seltzer and some ice.”

“Ski…I mean Brad, you put cherries in my bourbon. That was very nice of you.”

“Let’s just say you have a good friend.”

“Hold that thought, David. Brad, this is a Coors Light.”

“Oh, right, Corona. They both start with Co.”

“That’s where the similarity ends.”

“He’s still Skippy, but at least I got cherries. So, Dan, was that it, a little work crisis? What about Maddie’s deck?”

“Well, I still have to add a mini-step off the back end but done.”

“Has it been accepted by the client?”

“It’s funny, Maddie likes laying on the Trex on the step and resting up against the deck. But we’ve had her cot on the newly extended surface. She seems to like it.”

“Have you moved onto the steps off the porch?”

“I’m working on the side door, the one that drops down to the driveway.”

“Here you go, Corona and a hunk of lime.”

“This is Corona Light.”

“So, Dan, which is more stressful, work-work or working in these projects?”

“Well, if my blood pressure is any indication, work-work is way worse.”

“You still taking your BP at home?”

“Yep. I met with my Doctor, shared those results and I’m good for a year.”

“Shared the results? What, did you take her a spreadsheet.”

“Let me guess, data by date and time, appropriately analyzed.”

“Min, Max, Average, number of readings in the morning, afternoon and evening.”

“Ha! Did you indicate which ones were after work?”

“Of course. Even the bad morning readings were on days I had early meetings.”

“What are the readings on Saturdays?”

“Good in the morning, usually good in the afternoon before coming here. After that, it depends on the season.”

“I don’t bother taking it if Pitt or West Virginia are playing?”

“What about the Steelers?”

“The Steelers played the night before my doctor’s appointment. I didn’t even watch the game.”

“You thought it would influence your BP the next morning?”

“If we won, which we did, I’d be up reading recaps, listening to press conferences. I wouldn’t get to sleep until one-thirty. My appointment was at eight.”

“You guys need another round?”

For the DIY fans, there are some details in the captions.

Maddie’s deck is getting a facelift.

Ready to get rolling.

I had to add some structure around the support post. 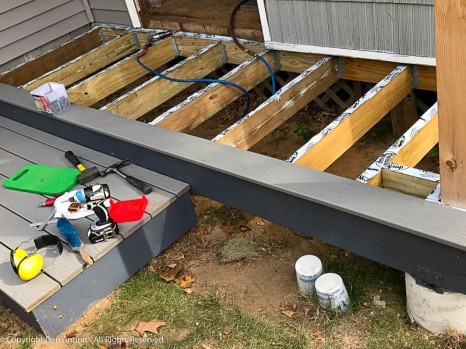 These boards are a 11′ 2″ (3.4m) long. Since the house side is tucked under the siding, I anchored the outside edge at the end and along the front.

Once I got past that post, these boards are going down fast.

I don’t normally clamp these boards, but that fence on the left sets up a chance for kickback, so I’m being careful. 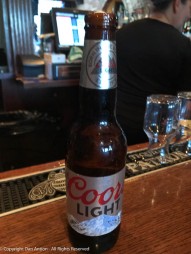 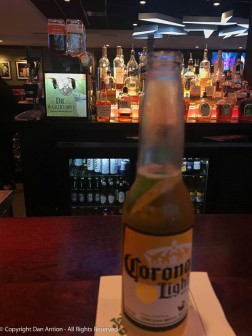 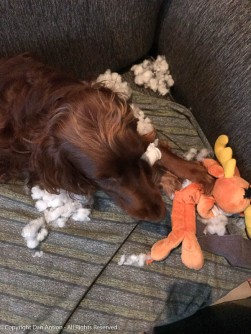 Stuck inside due to rain, Maddie tore into Bullwinkle.

Maddie likes having her back against something.

My reward after getting the deck boards down before the rain started,

“What happened to my deck?” The first leaves fall on Maddie’s deck. 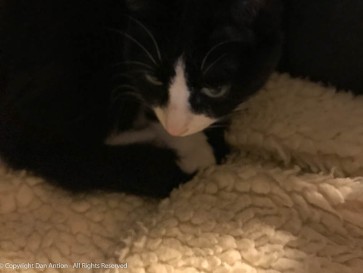 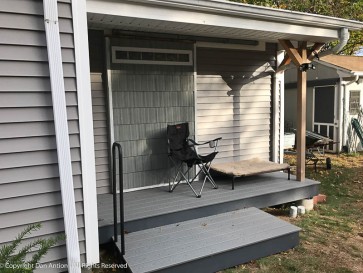 I thought we’d try sitting at the new end.