We are at the point in our stairs/steps/landings project where I’ve begun working on the stairs coming down from our porch. There are two sets, one that exits to the driveway and one that exits to the yard. These aren’t tall staircases. In fact, they only rise between 21-30 inches (53-76cm), but they are challenging. The steps into the yard are larger, but the ones to the driveway were complicated. Since the door to the yard will be out of commission while I replace those steps, we wanted to have the new steps in place on the side – since that’s how we will have to take Maddie outside.

The complicating factor on the side door is that it meets the driveway at a steep angle. The shape of the support bases is a trapezoid. The bases were hard enough to build but cutting and installing the Trex was even harder. The previous stairs had composite decking that was cut and shaped to match the angle of the structure. That made the boards hard to fasten at the narrow end. Also, the previous material was a consistent color throughout, which is not the case with Trex. Trex has a hard surface layer molded onto a composite substrate. The edges are not attractive once cut.

With the door out of commission for 2-3 days, I decided to lock the door and wrap the entrance in Caution Tape. Initially, I though this was overkill. But the next time I walked onto the porch, I returned to tell my wife:

“I tried to go out that door and ran into the caution tape!”

During the course of the 2 ½ days the door was sealed, we both tried to go out that door. Even Maddie, who normally comes in that door with me after our walk, tried to use the unfinished stairs.

The previous stairs had been in place for 25 years. Not only did we want to go out the door, we weren’t ready to adjust to the fact that the initial step down is much steeper. The new stairs have a higher (more traditional) rise, so we could have two large steps instead of three narrow ones. As a precaution, we added the following signs on both sides of the door, at least until we can reset the muscle memory that seems to be controlling our legs. 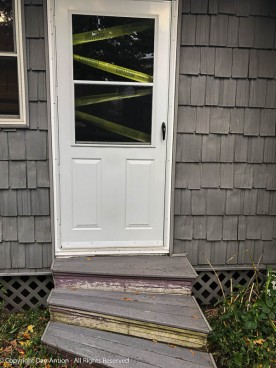 The old steps required us to open the door from the second step. The Editor had to step up, open the door and step back down – not safe.

The old steps were still fairly well attached. It took a while to remove.

The base step structure will rest on the concrete pier and be attached to the 4×4 (set below the frost line) and sit on the ground.

Once this base is level, everything will be set. Note that the new steps extend to the right of the door so we can open the door from the top step.

Looks good to me!

The edge board is temporarily placed. It will be removed when I install the railing. 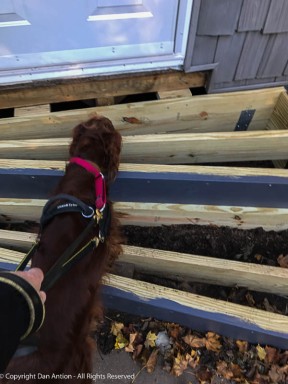 The second step is easier, because the edge closest to the house is a 90° cut. 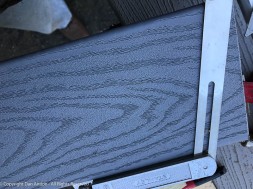 On the lower step, both ends of each board is cut at an angle. The tool is a T-Bevel – very useful for marking odd angles. 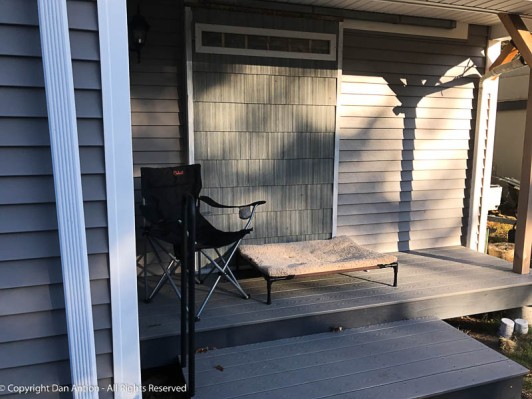 We’re sitting a little earlier, while it is still warm.

Maddie is enjoying a little sun this afternoon.

Maddie has a visitor.

Getting close to the end. The section under the door will be covered in PVC trim for now. In the spring, the siding will be wrapped under the door.

Nice wide landings up do and on the side of the door. That was the goal.

“I have got to put a lock on that door.”