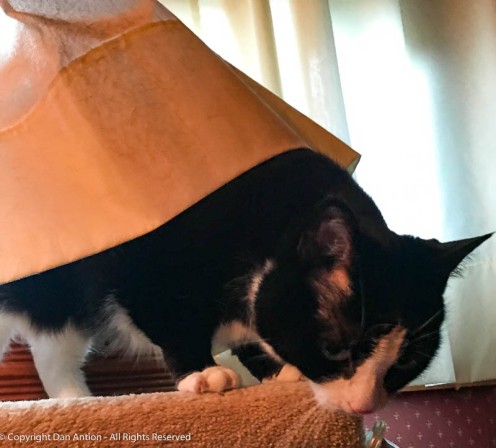 No, this isn’t an ad for obsolete social media, this was more of a declaration. When I described the writing desk that I made, and how it has become my morning place, I neglected to mention something about the location. The desk is under a window in our bedroom – a window with a cat shelf. I built the cat shelf, too (more about that later). The cat shelf is about two feet (61cm) above the desk surface. That makes it the perfect place to put stuff that I want close by, but not in the way. For instance. I typically put my glasses up there.

I went to the door where MuMu was sitting behind the child gate that keeps Maddie out, and I reached over and scratched her. MuMu moves around a lot when you scratch her, often stepping just out of reach, at which point she grumbles. Partly out of frustration and partly to be nice, I scooped MuMu up and brought her to the cat shelf. I wanted her to know that, even though I’m working at my desk, she can sit and look out the window.

She kneaded the carpet surface a bit, peaked out the window and then peaked at me from behind the curtain. Then she smacked my glasses off the shelf, as if to say:

“Keep your stuff off of my shelf!”

The shelf is over 20 years old. I made it for our first cat, Oreo. It’s an open frame made from Cherry, with a bit of carpet covering the opening. The idea was that the carpet would be like a hammock. The carpet has a nice sag to it now, no doubt due to inferior material, and it appears to be a comfy place to lay.

All of our cats have liked this shelf and a second one I made at the same time. They don’t show their appreciation well, but that’s par for the course with cats. MuMu stayed in the shelf for about 45 minutes, and then jumped down gracefully onto my laptop, and grumbled again. 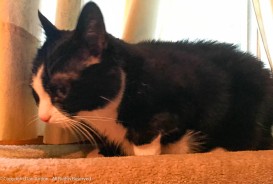 “I can still see where those glasses were.” 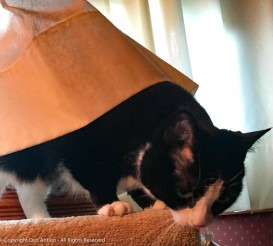 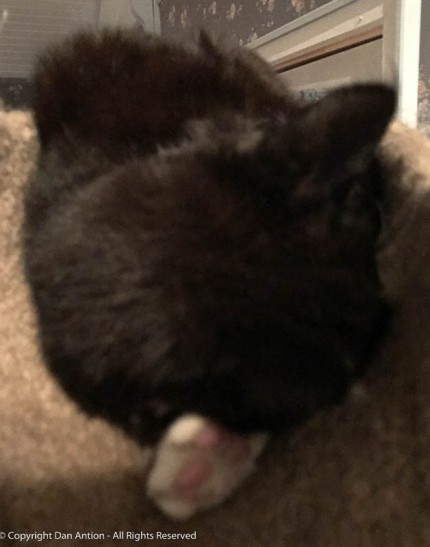 I’m sure MiMi would like to wake up and say hi. 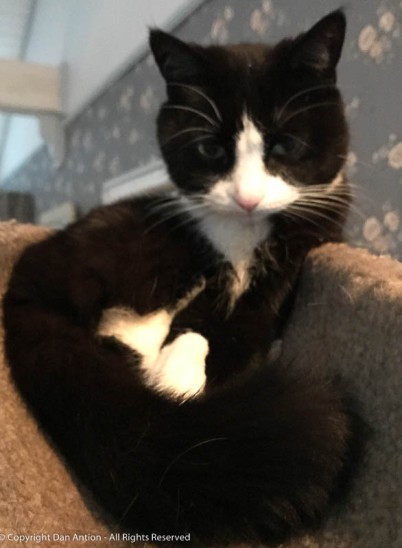 This bush is hanging onto its red leaves.

Maddie is more than willing to share her space.

We haven’t had many sunny days, but we’ve tried to make the most of them.