In several recent posts, comments included questions and references to information I left out of the post. I thought I’d see if I can answer a few of these without getting too technical, using any math or boring the folks who already read the answers in my reply to the comments. Oh, and I’ll try to be brief – I tossed that in to give the Editor a laugh. Here we go:

Why did I say that Harbor Freight is a good place to buy tools, if you’re not planning to use them professionally? Harbor Freight is a discount tool store. They carry a lot of items at very good prices, and perhaps I should have qualified my answer better. First, I should have mentioned that it’s my opinion and it’s backed up by only the lightest weight of evidence. When I buy tools, I think about how often I will use them. For woodworking tools, tools I plan to use often and tools where easy-to-use features are worth having, I tend to buy the best brand I can afford. Not the best, in most cases, but the best for me. I want those tools to last.

For metal working, a task I enjoy but only venture into three or four times a year, I shop at Harbor Freight. For example, I bought a metal-cutting bandsaw, on sale at Harbor Freight for well under $100. I doubt this tool would hold up to daily usage in a welding shop, but it will likely last me many years, and for $20 I bought a 3-year no-questions-asked warranty. It made short work of cutting the conduit and firewood racks I used for those railings. I also bought an electric hoist to help move items to and from the storage above my garage.

In my post on Saturday, one that was already over my self-imposed word count, I mentioned a Biscuit Jointer. I knew it might bring questions. I got several, and several biscuit related jokes on Facebook. A biscuit jointer is a hand power tool used to cut semi-circular grooves in the mating surfaces of two pieces of wood. Before those pieces of wood are glued together, glue is added into those grooves, and a “biscuit” is inserted. Biscuits, in this case, are oblong compressed wooden disks. They perform two important tasks. First, they work like a spline to keep the pieces of wood aligned as they are clamped together. Second, when the disks absorb the moisture from the glue, they expand. This causes them to hold the two pieces of wood together very well. 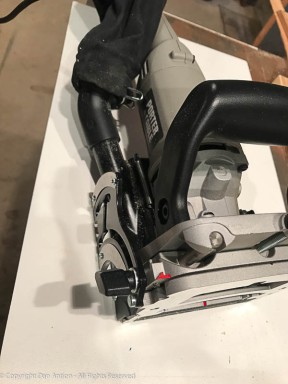 Biscuit-Jointer. You line this up with the mark and press the unit forward. 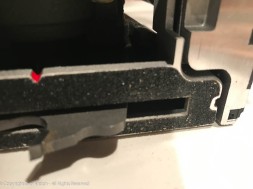 This is the business end of the biscuit cutter.

A simple mark indicates where to cut the biscuit slots.

The biscuit slots are aligned top-to-bottom and side-to-side. 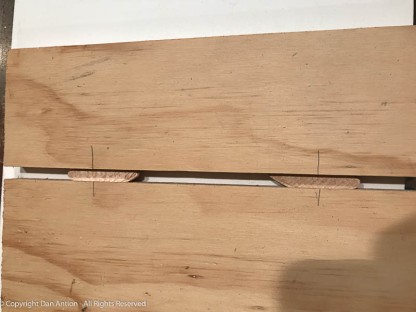 This is how the boards would be joined.

A few people were unfamiliar with the term “Transfer Station.” In New England, transfer stations are usually found near the site of a dump/landfill that reached its capacity and has been closed. People still bring their trash there, but it is sorted – perhaps as the people dump it, perhaps by staff – put into trucks and transferred to a working landfill or, in this area, a trash-to-energy plant.

My photos on Thursday included a few shots of an old dam and mill pond. Picturesque, to be sure, but potentially hazardous. An article in our local paper on Saturday focused on three dams in Connecticut, including one I’ve featured here several times, that have been identified as being in a “high hazard” state of deterioration. Apparently, there are 1,700 such dams across the United States, and a dozen or so are in CT. The number is not accurate, as some states (NJ, Texas and Maryland) didn’t report their numbers during the study). The dam I have featured here is in the neighboring town of Enfield. According to the article, a “training wall” ( a wall that guides the flow of water) is in poor condition. This wall is scheduled to be replaced in 2025 at a cost of $450,000. That’s why there are so many dams in bad shape.

Most of these dams were built without permits or even much planning. Many of the dams here in CT are remnants from the days when water wheels powered the mills. As mills electrified, many mill owners, like the Collins Ax company featured above, converted the dams to generate electricity. Dams in other parts of the country were built for irrigation, flood control and to retain farm or mining waste material. The article states that in the past 40 years, there have been about 1,000 dam failures, causing 34 deaths.

A final question, for today, is one that I was very happy to answer. Lois asked if Mission Style furniture is the same as Craftsman style? The answer is mostly yes. During the industrial revolution, furniture and other home items and houses themselves started to become more ornate and elaborate. In response, the was a movement/philosophy called Arts & Crafts that emphasized simpler designs. Frank Lloyd Wright championed this movement. Many people were convinced that simpler lines and more utilitarian forms were desired. A large group of furniture makers adopted this philosophy and launched what came to be known as the Craftsman movement. Gustav Stickley followed the Arts & Crafts and Craftsman movements in his furniture and adapted them in what he termed Mission Style furniture. Quoting an article on this history, Stickley said:

“I felt that badly constructed, over-ornate, meaningless furniture that was turned out in such quantities by the factories was not only bad in itself, but that its presence in the homes of the people was in influence that led directly away from the sound qualities which make an honest man and a good citizen.” The article continues:

“Stickley was concerned about making furniture following the Craftsman philosophy that would provide his American market an aesthetic, functional choice that reflected the best in the American character: plain, practical, honest. Stickley’s furniture, which he later referred to as ‘mission style’, was often made of oak, with clean, simple lines, that was both functional and built to last centuries.”

I bought this hoist at Harbor Freight – on sale for about $75. I use it 3 or 4 times a year and it’s wonderful. 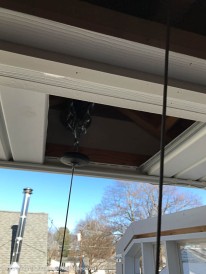 The hoist is just inside the garage. An anchor point for the cable is concealed in the soffit. 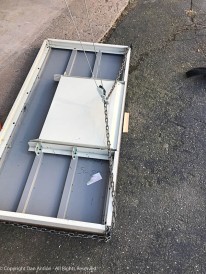 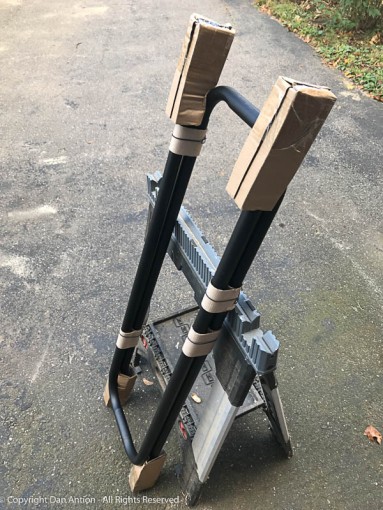 The “handrails” are actually firewood racks. I had to cut the brackets off of them. That took about 10 seconds with the bandsaw.

Getting ready to cut the support poles (1 1/4″ conduit) to support the handrails. 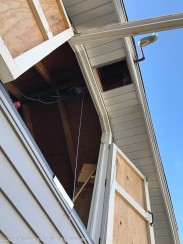 Once the doors are open to the storage area, the hoist can be deployed. 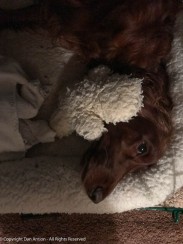 Maddie wasn’t eager to come out of her crate – it’s pouring outside.