Bushnell’s Turtle display offers a fascinating bit of history in this recreation.

Inside Bushnell’s Turtle. Everything, including the ballast pump, and propellers were hand operated by the lone occupant.

Wait a minute. We’ve seen those two photos before, and one of them isn’t a door. What gives, Dan?

Main St. Essex is narrow, so all the photos I have are from the opposite side of the street as I walked from my car to the center of town and back. Last week I was on my way out, this week, I am on my way back to my car. The problem is, I used up my history. Except for one thing that appeared to have piqued peoples’ interest:

On September 7, 1776, Ezra Lee piloted the Turtle and attempted to attach a time bomb to the hull of British Admiral Howe’s flagship Eagle in New York Harbor. This was the first use of a submarine in warfare. This was not the first submarine. As we know from following the Teagan Geneviene’s amazing serial story “Copper the Alchemist & the Woman in Trousers,” Submarines were first built by Dutch inventor Cornelius van Drebbel in the 1600’s, but they were not used in combat. David Bushnell, an American inventor, thought that a submarine would be the best means of delivering the underwater mines he had invented. He built a wooden submersible, the Turtle, that was big enough for a single person. The Turtle was hand powered. The idea was that a mine, carried by the Turtle could be attached to the hull of an enemy ship. Unfortunately, the boring mechanism (a hand-turned drill) could not penetrate the iron-reinforced hull of the Eagle. Wikipedia gives us the following specifications:

“The Turtle resembled a large clam as much as a turtle; it was about 10 feet (3.0 m) long (according to the original specifications), 6 feet (1.8 m) tall, and about 3 feet (0.9 m) wide, and consisted of two wooden shells covered with tar and reinforced with steel bands. It dived by allowing water into a bilge tank at the bottom of the vessel and ascended by pushing water out through a hand pump. It was propelled vertically and horizontally by hand-cranked propellers. It also had 200 pounds (91 kg) of lead aboard, which could be released in a moment to increase buoyancy. Manned and operated by one person, the vessel contained enough air for about thirty minutes and had a speed in calm water of about 3 mph (2.6 kn; 4.8 km/h).”

The mechanisms of the Turtle Submarine.

David Bushnell is credited with the invention, although he was aware of the work of the Dutch inventor Cornelius Drebbel, Bushnell was also assisted by a New Haven clock-maker, and brass manufacturer, Isaac Doolittle. Again, excerpted from Wikipedia:

“Doolittle designed and crafted (and probably funded) the brass and the moving parts of the Turtle, including the propulsion system, the navigation instruments, the brass foot operated water-ballast and forcing pumps, the depth gauge and compass, the brass crown hatch, the clockwork detonator for the mine, and the hand operated propeller crank and foot-driven treadle with flywheel. According to a letter from Dr. Benjamin Gale to Benjamin Franklin, Doolittle also designed the mine attachment mechanism.”

The Turtle made several attacks on British shipping, but none were successful. The ship that tendered the Turtle was sunk off the coast of Fort Lee, New Jersey and the Turtle was lost. The replica in The Connecticut River Museum is one of several around the world. According to the US Navy research library, the Turtle is notable because:

Details about how the mine was to be attached are a little sketchy. As described in this article, a sharp screw could be twisted into the target’s hull from inside the Turtle. Apparently, that screw could be separated from the auger mechanism. The mine would have been attached to the screw by a rope / chain running along the Turtle’s hull before the journey began.

This post is part of Norm Frampton’s fabulously fascinating weekly bloghop, Thursday Doors. Each week, Norm calls on people around the world to bring to the surface, as it were, photos of doors that they want to share. To view these doors, Norm’s doors and to possibly contribute your doors for consideration, visit Norm’s page. 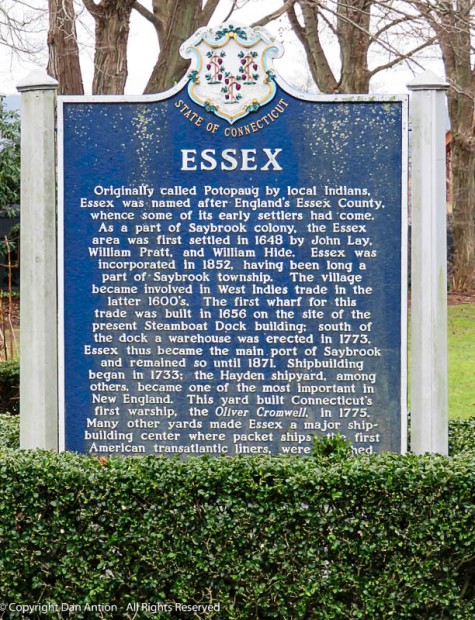 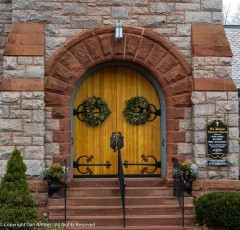 St. John’s Episcopal Church. The congregation was founded 1790. This building was built about 100 years later.

Main street includes a number of small shops and boutiques. 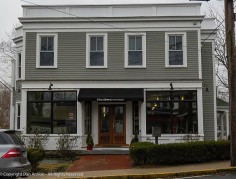 Main St is one way. To leave town, you have to go around the block. This building is on the back side.

On the way out of town. A view from the back side of Main St.

The Griswold Inn dates back to 1776. This is not the Inn, it’s across the street behind a parked truck. This is the Inn’s store.

I’m not sure how many times this place was expanded.

This might be my favorite house on the street. 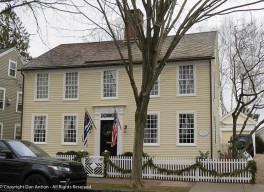 From 1845. This house is also seen from the back on the way out of town. 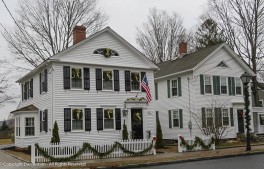 Two very nice houses. I like the fan window on the one on the left.

I think Maddie and I could sit there for a while.