Please accept my apology in advance for the day that I reuse some of these doors in a post after I tour The Colt Armory. In the meantime, I’ll start by mining the National Registry of Historic Places (HRHP) for some photos to accompany my photos from a quick drive past the building last week, and a brief walk around the parking lots of a magnet school and an apartment complex that are part of the revitalization of the Colt Industrial District. The district is a National Historic District now and will soon be managed as a National Park.

Samual Colt invented the automatic revolving pistol in the late 1830s, in New Jersey, but it wasn’t accepted, initially. In 1848, he established a manufacturing facility on the banks of the Connecticut River in the south end of his home town, Hartford, Connecticut. The Colt complex grew to include factory buildings that were 500 feet long (152.40m), a foundry, a green house, many units of single and multi-family worker housing and a part that was gifted to the City of Hartford. The following is from the NRHP Nomination form:

The Colt Armory has long been a Hartford landmark. The original armory (1855) was destroyed in 1864 by a fire suspected to have been set by Confederate sympathizers. The new armory, completed in 1865, was built as a facsimile of the original. This building is still in use.

The imposing 3-story Palladian structure is built of brick with rusticated brownstone sills and quoins. The long gable roof is crossed by five pedimented bays, which are embellished by ox-eye and arched windows under elaborate corbelled cornices. Above the crossing of the projecting central bay and roof is a large blue onion-shaped dome set into a ring supported by white columns. Prancing on the dome’s peak is a statue of the “rampant colt,” the insignia firearms company statue of the derived from Colt’s coat of arms. The dome originally had gold stars painted on the deep-blue background.

The armory was designed by Colt, his nephew, architect H. A. Gr. Pomeroy, and Elisba K. Root, inventor, manager and later president of the company. The armory was extraordinary in its tine for the amount of light and ventilation provided by the large, many-paned windows. This natural system was supplemented “by gas lights and piped-in air. A 350 horsepower engine with two 30′ (9.1m) boilers and a flywheel 30′ in diameter supplied power for the entire building through a system of noiseless’ belts and shafts. The old armory is surrounded by numerous 19th and 20th century additions. One, behind the armory, is a long single story shed constructed entirely in rusticated brownstone blocks. This is possibly a surviving section of the 1855 building.

Directly behind the factory Colt constructed multiple family houses for his workers after the completion of the original factory in 1855. Only ten of the estimated 50 original dwellings survive. These buildings, considered commodious in Colt’s time, are now unoccupied and threatened with demolition. Constructed in brick with brownstone sills, the buildings have been painted white. The blocky, austere structures are aligned in two rows of five houses each on streets on both sides of the complex. Both types of housing are surrounded by considerable open space, and are entered through the facades between buildings, rather than through the facade facing the street.

There is so much more information included in the nomination form, but I’m going to stop here for today. I have pictures of many of the buildings discussed thus far. I intend to get more from the area once the weather warms up a bit and the park is green instead of brown.

Thursday Doors is a weekly gathering of door-lovers from around the world. Heading up this fun blog hop is none other than Norm Frampton. If you are interested in participating, or if you just want to see more doors, hike on up to Norm’s place in Canada. Leave a link to your doors, view other doors, and most importantly, check out Norm’s doors. 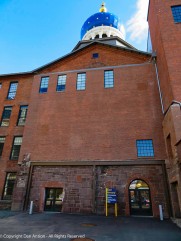 Looking east from the back of the main armory.

Entrance to the East (main) Armory. 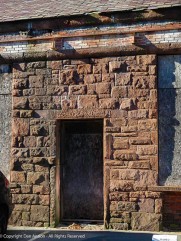 One of the boarded-up doors in the west armor.

A section of the west armory. Most windows and doors are boarded-up.

New lofts and apartments in between the east and west armories at the north end.

Looking east. The single story west armory is directly in front. In the distance is the east armory.

The Colt complex as seen from the east side of the river.

One of the original entry doors at the north end of the east armory.

The east armory is being renovated.

Restoration work on the east armory is progressing nicely.

The south end of the complex has been turned into a magnet school.

Colt Indstries when it was still operating. 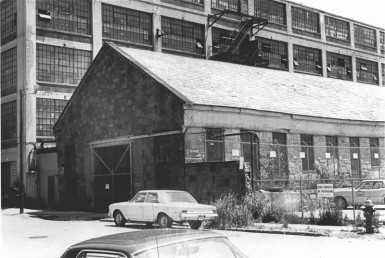 Factory buildings at the south end of the complex. 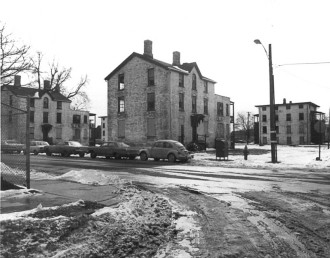 Some of the employee housing that was restored.