How Much is that in Dollars? – #SoCS

It’s time for Linda G. Hill’s fantastic Friday challenge, and the Stream of Consciousness Saturday prompt. I have a lot on my mind, so I’m going to carry the prompt to the bar and get started:

“Your Friday prompt for Stream of Consciousness Saturday is ‘figure.’ Use the word ‘figure’ any way you’d like. Have fun!”

If we were having a beer, the fuse has been lit on a money-grubbing rant.

“Hi guys. Sorry to take so long getting here, I was downstairs, the Bud Light keg kicked.”

“A crime against humanity, Cheryl.”

“Easy Dan. Some people would say the same about Corona.”

“That’s true. If you want to escape derision for what you’re drinking, order something civilized like a glass of John Howell’s Bourbon.”

“I take it by that that, David, that you’d like your usual. I’m sure Dan is willing to endure the ridicule attached to his beer.”

“If the lime slice is perfect, or if there are two, delicately balanced…”

“Don’t start Dan! You’ll have your artistic lime slices next week, when Skippy is on-duty.”

“Aw, Cheryl, why must you subject us to his abysmal service?”

“I have a wedding to attend. I’ll be back with your drinks in a minute.”

“I’m sure it is, David. Everyone else seems to think so.”

“I’ve touched a nerve. I can buy you a beer if it would help.”

“No, at least ours is a fair arrangement.”

“I fear asking, but what on earth has got you so spun up?”

“Fundraisers, price gougers and ‘mo-money’ money-grubbers are all figuring prominently in the calculation of my mood.”

“I see. By price gougers, I’m assuming your referring to the people on Amazon selling Purel for four-hundred dollars a case. I read that Amazon shut them down.”

“Here you go guys. Four-hundred dollars for Purel? Maybe you should get a glass of vodka on the side instead of seltzer, David – Purel is mostly alcohol.”

“That’s a good idea, Cheryl. But they say your hand sanitizer should be at least sixty-percent alcohol.”

“I could arrange to get some Balkin 176° that’s eighty-eight percent alcohol. I also have Absolute Black, that’s one-hundred proof, and a lot cheaper.”

“I’ll stick with seltzer, Cheryl. I prefer to sanitize from the inside out. But put a mask over Dan’s beer, I think he’s mocking me.”

“If I were to mock you, it would be for putting your faith in Amazon to prevent price gouging.”

“Like I said, Dan, they did shut several sellers down.”

“David, Amazon deals in data and is driven by analytics. Amazon days aren’t like days to you and me. It’s like dog-years times ten. They should be able to figure that stuff out in minutes.”

“Well, here’s to them for trying, I hear it isn’t an easy decision – cheers!”

“So, who are the other money-grubbers? I’m sure you’re not buying Purel.”

“My PBS station and my alma mater.”

“It doesn’t matter, it’s only a matter of time and everyone will jump on board.”

“I did notice that it’s pledge week.”

“It does seem that way, Dan, sometimes, well, yeah, every time, now that you mention it.”

“This was worse. This was an email, thanking me for liking them on Facebook, but saying that ‘social media mentions only go so far.’ What they need is cash.”

“That is crass. What did your alma mater do?”

“Nothing unusual, they’re just pointing out that since I missed the Annual Day of Giving, that there’s still time to donate.”

“Didn’t those annual days of giving start out encouraging you to give of yourself to your community?”

“Pffft, yes, but what’s that worth in dollars to my university?”

“Well, I suppose it’s harder now that a lot of people are in a tax situation where contributions aren’t deductible.”

“That’s the second time you’ve defended the people I’m mad at. If you want to contribute, contribute. If you can’t afford to contribute without the deduction – contribute less. And, don’t tell me it’s hard for Amazon to stop price gouging.”

“Again, Pffft. It’s not hard for them. Pick a percent. Set a flag. Stop the sale. They know the seller’s cost and the price – and they’re pocketing fifteen-percent of that price.”

“The point of the article that I read, was that market forces that push prices higher actually protect the people buying late from the people who would tend to hoard products that are in high demand.”

“I don’t understand, ‘people buying late,’ what does that mean?”

“Late, as opposed to the people waiting in line for Costco to open.”

“Costco opens at ten-o’clock. I’m guessing the people who consider that early are the ones looking forward to setting their clocks ahead tonight.”

“That’s it. Isn’t it? It’s not the gouging and the grubbing that’s got you in a twist, it’s Daylight Saving Time.”

“It figures! Cheryl, bring this soon-to-be-one-hour-deprived young man anther Corona, and put this tab under my name.”

A service appointment for my car gave me a chance to visit Great River Park. It’s beginning to look like spring.

It’s hard to tell the trees from the reflections at this point in the year.

Looks like the remnants of the “sea dragon.” They will have to remove this before installing the dock (which anchors on that pole. 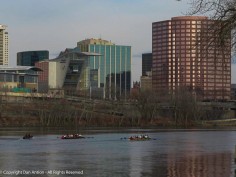 Now they’re headed back upstream. The guy in the power boat was giving them a pretty hard time.

This guy is liking the shelter of these downed branches. 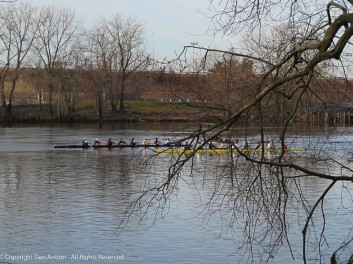 These guys were moving well, but this is the downstream leg and the current was pretty strong.

They don’t really lock the gates. The park is open dawn to dusk, and dawn won’t be at 6:15 tomorrow.

It’s hard to see, but that tree is turning green.

I hope I can continue cycling at his age.

This bush is ready for spring.

Taking Maddie out around 6:30 am. Tomorrow, it will be dark at this time.

I know it’s the wind, but I have to laugh when thinking about that squiggle.

MiMi is unaffected by DST, she just sleeps until it’s time to eat or play. 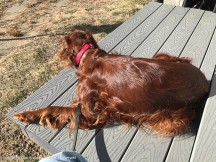 Sometimes, Maddie just drags us over and sits. If it’s warm enough, we don’t mind.

It’s so tempting. I just want to grab that little paw.