I decided to get closer to the “one line” portion of Linda’s challenge. Of course, it won’t be one line, because – everybody say it with me – it doesn’t make any sense without the backstory.

Thurty-seven years ago, The Editor and I had begun raising our first Irish Setter, Mitzi. I had grown up with dogs, and I had had dogs as an adult before meeting The Editor, but she had never had a dog. Since she was to be the primary care giver, we thought it would be a good idea for her and Mitzi to enroll in a training course. We did our research (1983, folks, that means Yellow Pages and newspapers) and we selected a woman who held classes one night a week, for eight weeks.

We waited until Mitzi was old enough, and we enrolled. The lessons were held in a large barn, maybe a dozen or so dogs. I’ll spare you (and I’ll avoid embarrassing The Editor) the details. Suffice it to say, we dropped out. The reasons were 70% Irish Setter and 30% the fact that The Editor was pregnant. However, the enrollment fee hadn’t been wasted. The first lesson, the most important lesson, according to the instructor, had been committed to memory. The first thing the instructor told the human students was to:

“Get down to the level of your dog and praise your dog!”

Mitzi figured that was all that was necessary. 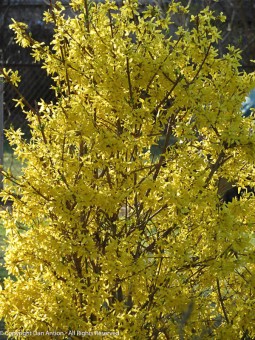 Forsythia – It belongs to our neighbor but it’s brilliant in the morning sun.

It looks more like a classified military site, but it’s a leaf dump. 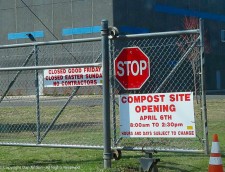 The leaf dump opened this week, and we’ve had some very nice weather for yard work. 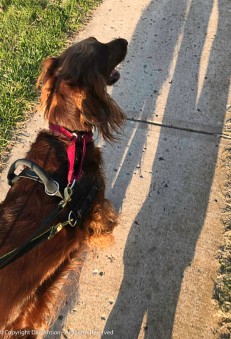 Maddie is enjoying the school shutdown. It means she can go for a walk every day and we can go early. 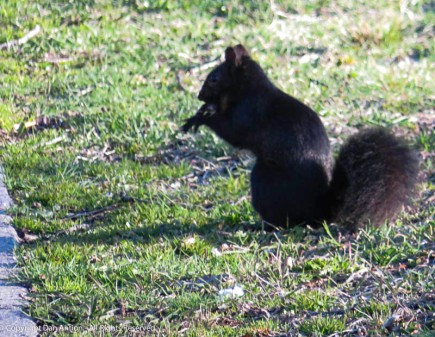 We’re seeing more and more of Smokey on our walks. 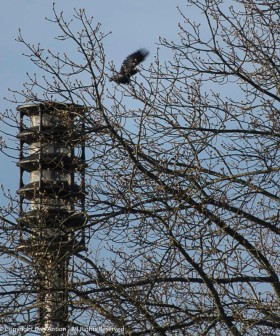 The crow was sitting on top of the public emergency address system speaker…until I pushed the shutter release.

One of our Public Works pay-loaders. He’s actually returning to the garage from the leaf dump. 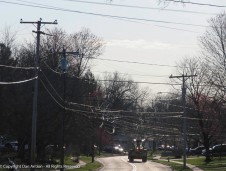 On our way back to the park, we were walking into the rising sun. I really liked the reflections.

In this case, Maddie is getting up to the level of her human (who stepped away for coffee). 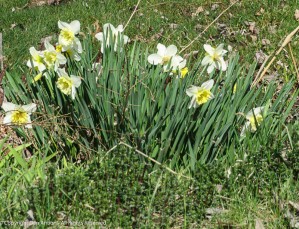 A little patch of spring. These are at the driveway to the dairy store we shop at.

I can’t tell if these are from our ground cover or if they are what some people call weeds, but we like them.

We’ve been missing MiMi, so I woke her up for this picture.

“Are you going to brush me before you sit?”

I guess our dogwood is big enough. The squirrels are taking their peanuts there to eat.

It’s important to be at the level of your dog.