I think we’re all aware that the isolation protocol (I think that’s what this would be called onboard the Enterprise) under which we are operating, has made photographing doors difficult. I have some door photos in reserve, but I’ve trying to obtain new ones. Today’s doors, as you might have already guessed are ones that I see while walking with Maddie. Several were taken when I had to move us off the sidewalk to avoid runners, joggers, cyclists, mail carriers and work crews from the local Public Works department. The work crews are the worst, when we see them, we have to alter our route.

Walking with Maddie is one of the “normal” things I can do. I do not need a mask. I do not need permission. There are time constraints, only because we try to avoid the walker lady. And Maddie is the perfect companion for maintaining an anti-social distance from all others.

As I write this, on Wednesday evening, the state of Connecticut has begun the first stage of “re-opening.” We are taking small steps, baby steps that will not materially impact my activity. I will still be limiting myself to shopping for groceries at a few stores, shopping for dairy products at our favorite farm and the occasional visit to the local hardware store. I do think that between now and next Thursday, I will venture out to take some pictures. With more things open, I feel less of a need to be “going somewhere.” If I chicken out, I still have those photos in reserve.

This post, like most every other post on Thursdays on this blog, is part of a fun weekly blogfest called Thursday Doors. Thursday Doors is organized and managed by Norm Frampton. Each week, Norm invites bloggers rom around the world to contribute photos of doors by preparing a blog post, such as this one, and share it through a link on his site. If you want to participate, or if you just want to see more doors, visit Norm’s site. 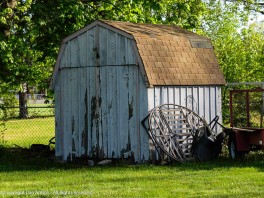 On the way to the park.

Sometimes, in order to avoid oncoming people, we cut through the parking lot and enter/exit through this gate. 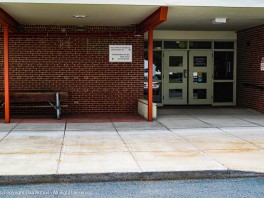 This was an elementary school, built in 1954 (like me). It’s been turned into apartments for elderly residents (including the walker lady).

That is one tired gate. 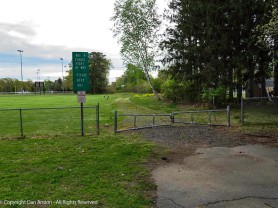 In rare cases where there are too many people, or people with dogs coming, Maddie and I slip through here and walk behind the baseball fields.

The cat I’ve nicknamed Theo (in honor of Joanne’s cat). He’s in his own yard, but Maddie does not approve. 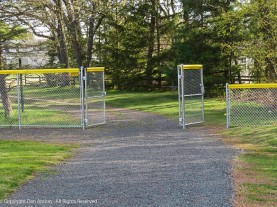 Since they installed these gates last fall, we’ve never seen them open. until today.

No Trespassing, but I don’t think this gate is going to help.

A door and a gate. The roll-up door in the side of the building has been used for concessions. The gate is to prevent vehicles on the path.

Sorry Maddie. It’s not a door, but the entrance to the dugout is right there. 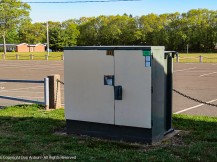 I think this cabinet contains connections for phones inside the apartments.

This is an AT&T cabinet. These days, that would mean data. 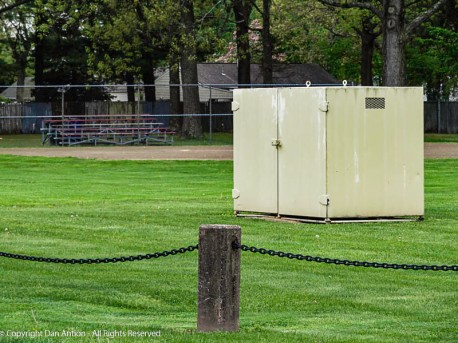 I saw this cabinet being prepared and installed. I believe it’s where the main electrical connections for the smaller park are made. 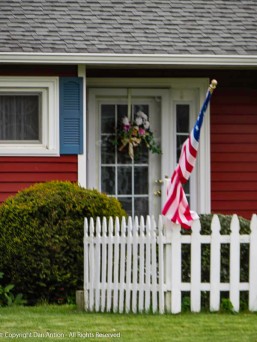 Flag, flowers, and a pretty door. The lady and the dog who live here are not fans of Maddie.

That’s the entrance road to the park.