The Suffield Connecticut Historic District was the subject of my first doorscursion in over 10 weeks. Last week, I shared a few doors from the south end of the district and a couple of farms that are located outside the district. This historic district is a bit unusual for a couple of reasons. First, it spans a modern business district. Second, it includes a private (secondary school) academy and finally, it includes two buildings which are listed separately on the National Registry of Historic Places (NRHP). Those buildings will not be included in this short series, but for a good reason.

The two buildings, actually, one building and a farm, have been preserved and converted into museums. Of course, they are closed now, due to the Corona virus. The good news is that in phase-two of our reopening, museums will be allowed to allow access to their interior spaces. I’m going to save those two buildings for a time when I can present them properly.

I did find that the NRHP nomination form for the district, included information and earlier photos of some of the buildings I photographed. Below is the excerpt that describes the featured image.

Here is the Second Empire in all its complexity. It is a tall, three story, mansard house with central projecting pavilion that rises to a mansarded tower above the third floor. Bracketed cornices at first, second, and third floors introduce a horizontal influence that balances the vertical thrust of the tower. A verandah runs across the full width of the front of the house; its roofline is carried around to the sides of the house by the roofs of one story, three-sided bay windows on the sides. The full front porch and the second story windows are protected from the sun by awnings. Decorative detail abounds. Window surrounds, eared at the bottom, have a variety of window caps, peaked, curved, half-round, and a combination thereof. Their outlines are followed by the bottom molding of the frieze of the second floor cornice. The consoles have exhuberant profiles; the porch posts are elaborately carved; and there is a foliate pattern in the face of a small pediment over the second floor pavilion cornice. A gazebo in the garden is painted green and yellow, the same colors as the main house.

There are three churches within the historic district. I have pictures of two, but one will have to wait until next week. It’s on the campus of the private academy, and I’ll include it when I present those buildings. One more building that is include in the nomination form is the rectory of St. Joseph’s Church. I’ll use their description.

Still another style, the Italianate, is represented by the rectory of St. Joseph’s Church, 166 South Main Street. This large, square, wooden house is noteworthy for its two story front porch at the center of the facade and for its unusually elaborate roof overhang. At each front corner of the porch is a fluted column with odd octagonal flared capitals supporting a square abacus, and at each back corner a fluted, engaged half-column with similar capital and abacus. On the upper rail of the second story porch balustrade is a line of pointed finials. The four posts of the porch at this level are heavy and boldly carved, terminating in brackets with drop finials that support the roof. The wide overhang of the main roof is supported by similar but heavier brackets. In the roof soffit, beyond the ends of the brackets, is an egg and dart molding running parallel with the eaves. Narrow horizontal attic windows with four vertical panes are snug under the overhang on a level with the brackets. The house is covered with aluminum siding that does not obscure the original detail. 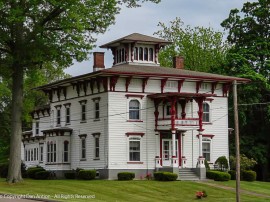 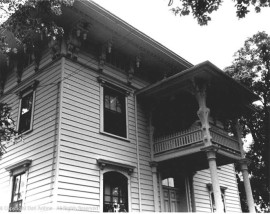 These doors, and a few others, including some that I don’t have current pictures of, are presented today in conjunction with Norm Frampton’s fun weekly blogfest called Thursday Doors. Each week, Norm invites door lovers from around the world to share interesting doors by linking their stories on his website. If you’re interested in seeing Norm’s doors and those of many others, just visit Norm’s page.

I didn’t find this barn while driving around but I like it.

A modern look to a historic building. 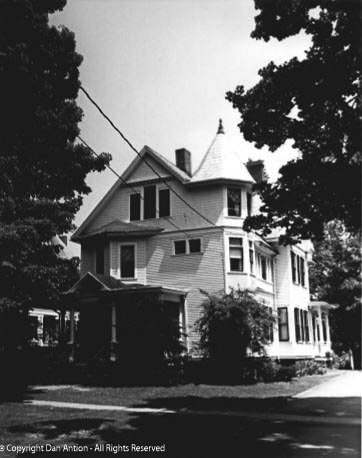 Another view of the featured image.

This is the featured image about 45 years ago. 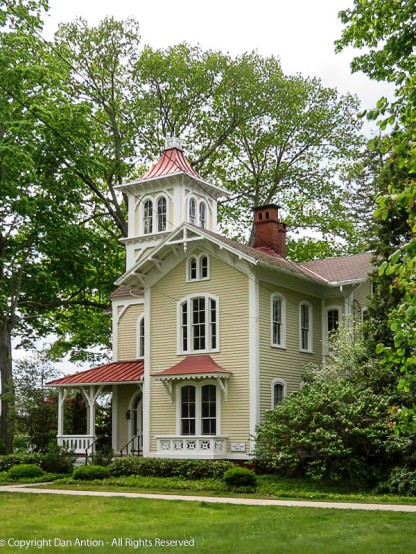 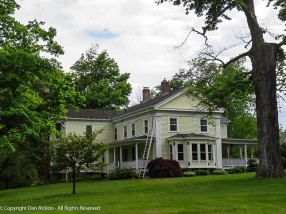 I had to include this if only for the reminder that a lot of maintenance is required.

I like these two houses. The one on the right is included in the nomination form.