Back in January, I was anticipating a series of excursions, north and south along the sides of the Connecticut River valley. I was inspired by a visit to Essex, CT, a book I had received as a gift and a lecture at a local historical society. A friend of mine and I were planning several trips, and were only waiting for slightly warmer weather. We were going to seek out museums, historical interpretive centers, landmarks, and the quaint New England towns that boarder the river on both sides and have drawn their economic history from that river.

Clearly, we needed a Plan-B.

Excursions have begun, mainly for shopping, but also for collecting doors and appreciating the history of a somewhat smaller area. The map to the right shows the areas from which I’ve collected most of my doors during the period from mid-March to the present. You may find it interesting to know that it is roughly 12 mi (19 km) from Windsor Locks, CT to Springfield, MA.

Just north of the CT boarder, on the west side of the river, is the town of Agawam, MA. I have to admit, I normally view Agawam as a place I have to “get through” on my way to a few favorite stores in West Springfield. There are two ways to get to Agawam from where we live, but they converge at a single bridge that crosses the Westfield River. CT State Rt 75 goes through the Suffield Historic District, through a relatively bland section of Agawam and directly into the business district of West Springfield. CT State Rt 159 winds north along the Connecticut River and the Westfield River and joins Rt-75. We normally avoid Rt-159 between April and October because Six Flags over New England is on that road.

Well, Six Flags is still closed, due to the virus and, as I discovered on my way to West Springfield, Rt-75 is under construction in three places. Returning through eastern Agawam on Rt-159, I discovered several interesting doors. And – be still my history-loving heart – a Historic District that is listed on the National Registry of Historic Places. Unfortunately, the NRHP nomination form has not yet been digitized. With apologies, the NRHP referred me to a page on Wikipedia (which I try to ignore). Instead, I chose to focus my discussion on one building, and I’ll let the owners do the talking. The following is from their website:

Distinguished by its stately size and excellent condition, the Captain Charles Leonard House is set back from the street behind a towering two hundred year old ash tree. Attributed to noted New England architect Asher Benjamin, the old Leonard dwelling is easily Agawam’s finest Federal building. The white, two story, hip-roofed building boasts an impressive facade featuring two-story Doric columns, Palladian window and elliptical fanlight. The Captain Charles Leonard House was placed on the National Register of Historic Places in 1975 and became what the Agawam Historical Commission considers the crown jewel of the town’s first historic district when Agawam Center was placed on the National Register in 2001.

Charles Leonard was born in 1764 and married Mercy Remington in 1789. One year later, he purchased twenty-five acres of land on the eastern side of Main Street. According to historian Ernest Newton Bagg, Leonard was a graduate of Harvard University who later turned to farming. He attained the rank of Captain while serving in the local militia, and was known by that title thereafter. It was in 1805 that Leonard constructed Agawam’s fourth tavern on the western end of his property to serve travelers as the first stop on the Hartford to Boston stage run.

The other doors in the gallery are from my trip home, beginning with the Ramón Emeterio Betances School just east of the bridge across the Westfield River. There are more, but I’ll save them for another week, and another celebration of doors brought to us by Norm Frampton. Each week, Norm invites door lovers from around the world to meet at his place and share the doors they love. You can visit Norm’s site here. 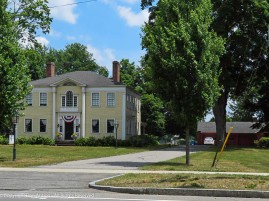 Even behind the trees, the Captain Charles Leonard House is stunning. 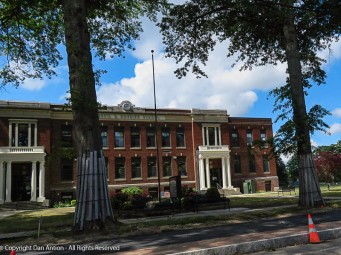 You can barely see the doors, but the sign was too hard to ignore. 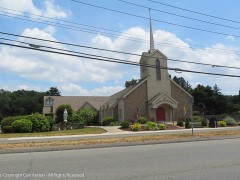 Established 1790, however, as I learned a long time ago, that date refers to the congregation, not necessarily this building. 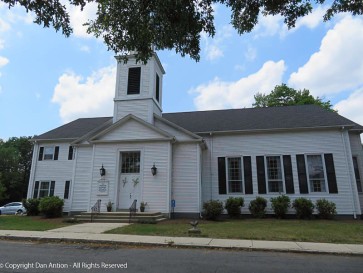 These “historic” marker reads “Built by Travis McIntire – 2010” Someday it will be historic.