Note: No Facilities is now operating under a new theme and was published via the Block Editor. While the Classic Editor remains an option for me at this time, I have decided to switch so I can stop thinking about it. WordPress is surprising people with pink slips for the Classic Editor, and I don’t like surprises. Also, some people have mentioned that they’ve been having problems viewing the photo galleries on small devices, so I decided to switch to a slightly more modern theme – I’m using Tortuga, in case you’re interested. Here we go.

As I mentioned on Saturday, I visited the Connecticut Historical Society (CHS) last week. They opened for the first time since they were ordered closed by the Governor back in March 2020. I added the year just in case the pandemic drags on. CHS had three new exhibits. Each exhibit would require more than one blog post to describe, and I have more photos than I can easily share. I will attempt to assemble my thoughts on the three subjects for a future post, but right now, there’s too much information to process. So, as the title would suggest, I offer observations on the three exhibits in the order in which I viewed them:

Fighting on the Home Front: Propaganda Posters of WWII

“This traveling exhibition from the Detroit Historical Society features about two dozen posters produced during the war that promoted patriotism, the purchasing of war bonds, growing and canning food, and taking jobs to aid in wartime production. In an era before television, posters were an efficient way to grab someone’s attention. Americans were likely to encounter war-related posters throughout their daily activities–on the commute to work, at work, at the grocery store, or at the post office.”

The posters in this exhibit addressed rationing, security, supporting the war effort, service, travel, price controls and our health. A dominant theme throughout the exhibit was individual sacrifice in support of a larger goal. Individuals – sacrificing – for others.

Manufacturing Victory: The Arsenal of Democracy

“This traveling exhibition from the National WWII Museum tells the inspiring story of the Home Front effort that produced tanks, planes, ships, and guns with staggering speed and unparalleled energy. It was a surge in productivity that not only brought the country out of depression, but also created mighty military forces, supplied the Allies abroad, and opened new doors of opportunity and social change.”

I thought I had heard of this program before, but, to be honest, I might be confusing it with “The Arsenal of Freedom” – an episode in the series Star Trek Next Generation. So many aspects of our existence were on display in this exhibit that it’s hard for me to even summarize it. Wikipedia (no, not my sole source of information) lists 45 major corporations that were involved in the multi-year program. The exhibit also highlighted industry executives who worked for one US dollar a year as they offered their insights and expertise to managing this effort. Some companies continued producing their standard products, albeit at an enhanced pace. Other companies retooled to produce military products, including tanks, planes, weapons, and ammunition. People who had never worked in manufacturing were brought into the workforce and production of many normal goods was discontinued. The program was not without problems, but the nation worked through it for the common good.

A Vote of Her Own: The Long Fight for Woman Suffrage

“One hundred years ago, women secured the right to vote with the ratification of the Nineteenth Amendment to the U.S. Constitution. The struggle for “woman suffrage” lasted more than 70 years and was fought by women and men on both sides of the contest. This exhibit features original photographs, documents, and artifacts representing Connecticut individuals and organizations who argued, reasoned, marched, and took action for or against women’s right to vote.”

There, aren’t you glad I didn’t try to go into the details? If you live in near Hartford, CT, I would urge you to visit these exhibits.

We joined the Historical Society the day before I visited. We wanted to show our support for the work that they do. 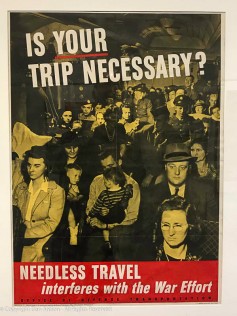 You could ask this question today. 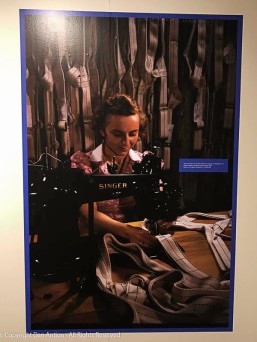 Women working in traditional roles in support of the war effort.

After the war, people were eager to purchase homes, start families and purchase the things that hadn’t been available. That’s an areal picture of Levittown on Long Island. Houses for returning soldiers. 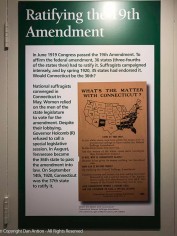 Connecticut had the opportunity to be the final state required for ratification, but our Governor declined to call the Legislature back for a special session. Tennessee earned the honor of being the final state. 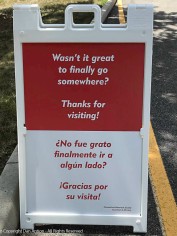 “Why is the trash on my porch again?”

I had to move the “trash” before I could sit. 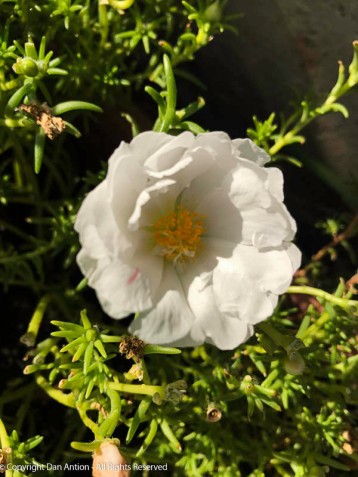 I love how this little branch produced a blossom. We will prune it before winter, but it’s too pretty to prune today.