I thought I’d close out the year with a fun topic. I should add that while I would normally count 2020 as the first year of a new decade, I might – just this one time – bend to the thought that 2021 holds that honor. Pushing 2020 into an even bigger box to be taped up and shoved into a corner in the attic seems like a good idea. 2021 will start bad, but let’s hope it grows toward the sun and turns out well.

My fun topic does come in the form of laughing at myself, although I suspect my particular misery will draw some company from at least a few of you. The topic is typos, and I am an expert. While only a few typos have made it to this space, that’s because of technology and oversight. Most of you are aware that The Editor does provide a valuable service on most days. She doesn’t edit my One-Liner Wednesday posts, and she doesn’t edit any post that I pull together late in the evening. That’s OK, when she misses the typos, I can depend on a few friends to catch them. I make the bulk of my typos today when I comment on your blogs, particularly when I make them from my iPhone. Technology, in the form of spellcheck on that device has turned against me in recent years.

I have collected hundreds of typo screenshots over the years. Many of those were featured in a previous typo-induced post back in 2015, when I redesigned the virtual keyboard to better accommodate my fat fingers. Things have changed since 2015 and, according to the phone manufacturers, those changes have been in the form of improvements to the autocorrect technology. Spellcheck and autocorrect have become more advanced. They have larger dictionaries in which to look for malformed words, they can search your contacts to see that Teagan should not be Regan, and they have expanded the volume of words which they can bring into context so as to not substitute ‘Math’ for ‘Mary’ – cuz no one should ever confuse those two words, at least not on a Monday.

I have read that my iPhone considers the keys next to the letters in my misspelled words and then applies its keen artificial intelligence to save me from embarrassing errors. I do not believe this because I still see:

Dootball – instead of football, although with the way the Steelers have been playing…

I’m going out to get some door – instead of food

That’s a great phoot – instead of photo, and

Hoof job! – instead of Good job.

And, despite the fact that I have never written about either subject, ‘thongs’ is substituted for things and the space in the simple expression ‘got it’ is often misplaced into an embarrassing remark that I know someone is capturing with a screen shot.

In case you’re wondering why an allegedly technically capable person like myself hasn’t figured out how to solve these problems; I have tried.

Some of it is my fault. I type ‘doot’ for foot and ‘phoot’ for photo so often that my self-educated spellcheck ignores those errors. In fact, my iPhone has “corrected” photo to phoot on more than one occasion. When that happens, I try to clear the dictionary of everything it has learned. Unfortunately, as my phone gets “smarter” it searches more and more content in its various lists, repositories, and memories. That means it finds mistakes I have made and considers them as valuable insight into the context of my world. So when it sees that I used the word ‘phoot’ in dozens of text messages in reply to a photo someone has sent me, it figures I know something it doesn’t.

Accordingly, it will never correct me when I misspell ‘great’ as ‘greta’ because I call my GPS Greta (Greta Garmin…Greta Garbo…get it?). I have lots of text messages saying something like “Greta says I’ll be home by noon.” So it must be a word.

If you wonder why my stupid phone can’t scour the web and see that nobody uses ‘greta’ like that, you might be surprised. Privacy laws would prohibit that search. Perhaps there’s a way I could allow my phone to compare my text messages to the web, but that would require sharing my texts with those algorithms and no, no thank you Apple/Google/Facebook.

I’ll end with the auto-correct-induced typo that caused me to pull this draft out of Trello and share it with you. Early Sunday morning, I was reading Laura’s “Sunday Snapshot” in which she shared some beautiful photos from 2020.

I may have hit one or two wrong keys, but nothing can explain what my auto correcting-artificially-intelligent iPhone concocted:

Thankfully, I caught that before pressing ‘Post.’ I make the s-for-a mistake so often when typing beautiful that my phone sometimes corrects my typing into that form. As for the rest of it, I have no clue.

“The snow’s gone, but it’s pretty cold. A peanut would help me get the calories I need.”

“I could use one of those peanuts, too.” 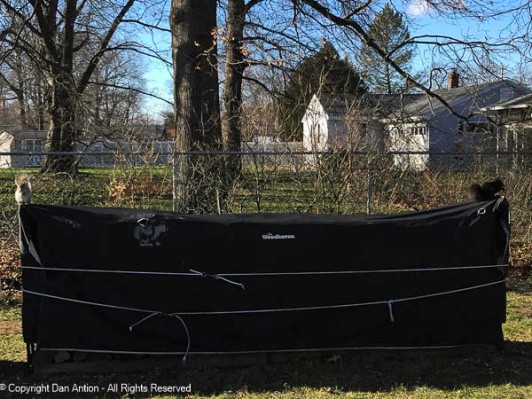 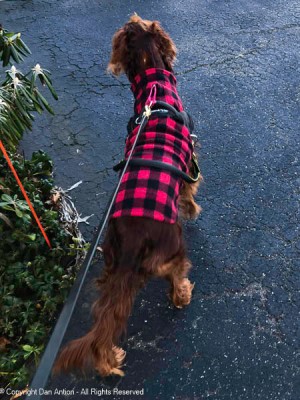 21°f (-6°c), no winter coat (Irish Setters don’t have an undercoat) but that buffalo plaid vest is like Superman’s cape with Maddie. 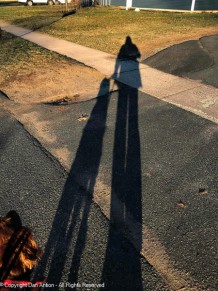 The long shadows are pointing northwest these mornings.

The park is back to bare trees and grass. 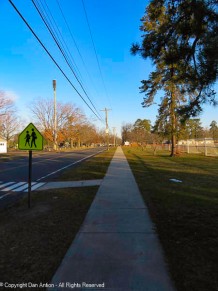 Maddie was happy to see this. She likes to wander (and sniff) on the sides of this walk.

Most of the leaves have blown up against the fence. This one is still going strong.

Sunset after a clear day. 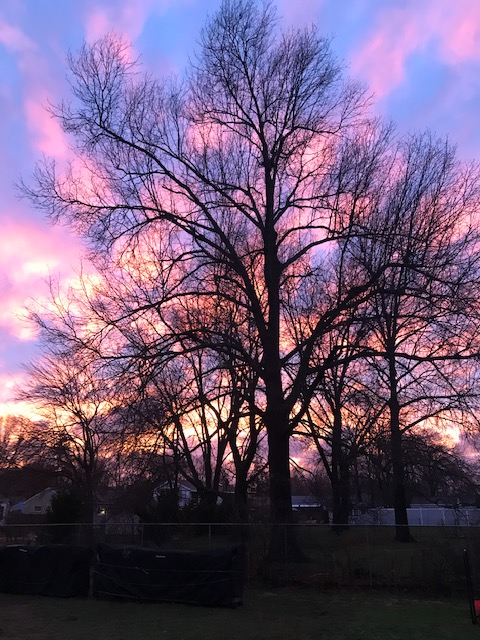 Christmas day, after the storm had moved on.

Maddie is looking for her buddy next door.

We dropped almost 40 degrees overnight on Christmas. The puddle is frozen.

I’m not sure MiMi wanted me to rub that foot.