I’ve been walking our dog, Maddie at the same time for about the past two months. Of course, during that time we’ve gone from walking in full sunlight to walking at dawn. I’ve been able to see some beautiful skies as the sun is rising, particularly when the sun peaks out from behind the clouds.

Maddie and I usually walk toward the two parks in our neighborhood. One, Veterans Park, is the largest park in town. The other one, Family Park is smaller and was favored by only one of the four Irish Setters that we’ve had, the first one, Mitzi. In fact, we still refer to that park as Mitzi’s park. Lately, Maddie has decided that she prefers Mitzi’s park. I’m just guessing, but I think she likes that we can walk on the grass there instead of just pavement.

On Monday, as we approached Mitzi’s park, we spotted a Public Works crew cleaning up after the storm. It’s a short week, and there was a lot of damage, so they were out early, too. Maddie knows that I won’t take her in the park when people are there, and since there were crews in both parks, she was upset. As we walked closer to the park, Maddie started barking. I don’t speak dog, but I’m pretty sure she was saying:

Just as we were about to cross the street and return home, the men got in the truck and left. Maddie seemed very pleased with herself.

We had a brief snow squall just before we left for our walk.

Los sun, later in the day. 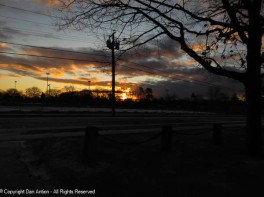 I’m glad Maddie scared the men away (let her have her moment) this was our view.

I’m going to take that as a firm no, regarding my gestures of affection. 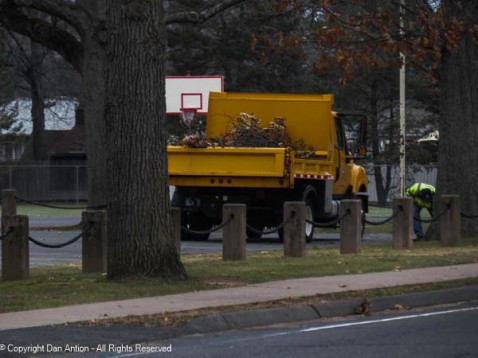 “What are those guys doing in my park?”

As the sun rises, we were treated to a lovely display.

This crew is working in Veterans park. 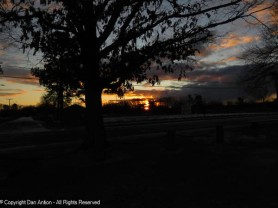 One of our earlier walks.

We are on our way home from our walk. This flag is one of our favorites.

That’s our dogwood tree. If you look near the top, it’s full of birds.

As we approach, the birds decided to find a different tree.

The end of a grey day. 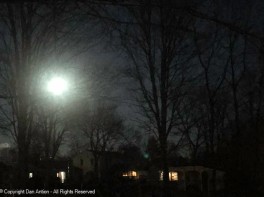 Yes, MiMi, I did rub your foot. If you stick it out there, I am going to rub it.