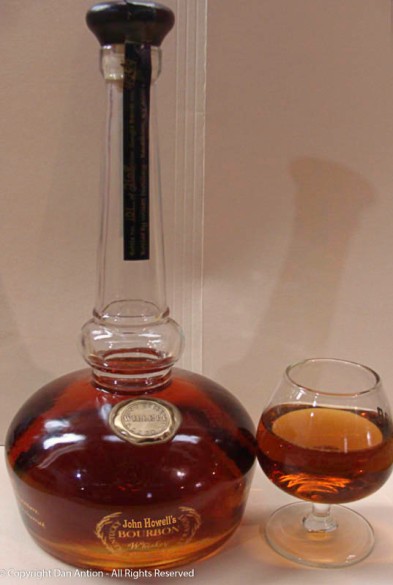 John Howells Bourbon (with a little help from PhotoShop)

This day began with bitter cold here in Connecticut, 4°f (-16°c) and David and I have been looking forward to warming up while catching up at the bar. Linda G. Hill, on the other hand, seems to want us to work harder than one would expect on a Saturday. Still, she has put bonus points on the table with her Stream of Consciousness Saturday prompt, so here we go:

If we were having a beer, you’d be wary of the crowd.

“Football? Yeah, after the Super Bowl, we are in for a long dry spell.”

“No, that’s not what I’m talking about.”

“Are you talking about the fact that Skippy is behind the bar? It’s temporary. I’m sure Cheryl will be back next week.”

“No, but this will have the effect of mitigating Skippy.”

“Hi Skippy. I’m not sure what David is getting at, but I’d like a cold Corona and I’m guessing he’d like his regular special.”

“Right, John Howell’s bourbon and all that other junk.”

“What’s wrong with being kind, David? I think the world could use a little more kindness. Especially if, as you say, the end is near.”

“So, here’s your beer, Dan – notice the double lime balance. David, here’s your bourbon, seltzer and ice. So, would you guys like anything else?”

“I would like some cherries, Skippy, if you have a chance.”

“Can you raise a glass for a toast without the cherries, David, or do I have to wait?”

“So, here you go, two cherries, and I’ll even put them in the bourbon. Now I have to check the other tables.”

“Sweet mitigation. What have you been up to this week, Dan?”

“Before we get into that, can you explain your doom and gloom prognostication?”

“The end is near…Isn’t that what you said when I got here? The end of what?”

“The end of this, Dan. Look around. This bar is at Covid capacity.”

“It is more crowded than usual.”

“David, you’re not making any sense.”

“People don’t have anything to do, Dan. They’re stuck in their house working with their spouse and their kids and the pets they thought would help them get through the pandemic, and they’re going crazy. So they come here.”

“But that’s normal. They come here all year. It doesn’t matter whether they work at home or in the office, they want a break. I still don’t see what’s ending.”

“This is ending, Dan. This. You and I sitting at the bar having a drink. One more person in this place and we have nowhere to sit.”

“So, you guys still doing ok?”

“So, Skippy. We are doing fine, despite your ongoing assault on the English language.”

“I’d say you’ve begun, but to be accurate, you’ve fallen back into your annoying habit of beginning every sentence with ‘so’ – so, pay attention to that, please.”

“It’s not that bad, Skippy. It’s just one of David’s grammatical fixations.”

“It’s not a grammatical fixation, Dan. It’s annoying. It’s also a little pretentious, as if the person using it is summarizing something us lay people wouldn’t understand.”

“David, do you really think Skippy knows anything you wouldn’t understand?”

“I didn’t mean to offend, Skippy. ‘So,’ in your case is like ‘um’ in your reaction. It’s a crutch-word you’re using to avoid an uncomfortable pause.”

“Did you work the bar last night, Skippy?”

“Sss, it was packed. In fact, the crowd in the lounge was a little too big.”

“I’m the only one wearing a mask, and I’m not high on the list to get vaccinated, so working in a crowd scares me a little.”

“That’s a good point. I think we’re ready for another round.”

“The bar was packed last night. It’s at capacity today. The patio won’t open for two more months. This place, our stools will soon be untenable.”

“It might be a passing thing, David. It might just be some people still celebrating the election and others still trying to drown their sorrow.”

“I think it’s more than that, Dan. Except for the fact that it keeps Skippy busy, this can’t be a good sign.”

“The bar’s making money. That means it will stay open. That’s a good sign.”

“Not if people start getting sick, and not if we start skipping Saturdays.”

“Saturday is an event; it doesn’t have to happen here.”

“Cheryl works here. There are other bars, but there aren’t other Cheryls, Dan.”

“In other words, you still think the end is near?”

“I do. Look around, I think this is the beginning.”

Note: In fact, in real life, I had to find another bar last week. My regular stomping ground was at capacity. The good news, I ordered a pastrami grinder for dinner and it was delicious.

It’s not a lot of snow but it stuck to everything.

The top of the shrub looks like a little forest.

I’ll take care of it later Maddie. I’ll get all the snow off your deck. 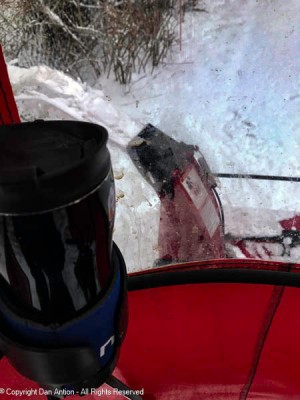 A few inches of snow mixed with freezing rain required the snowblower. 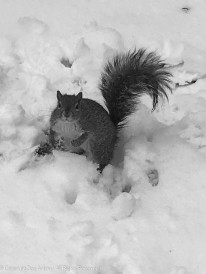 This is not a face I can easily refuse. They lose track of the peanuts, so we try to get close when we toss them. 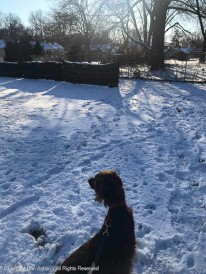 The sun came out, but the temperature started dropping. This little bit of snow will be with us for a while. 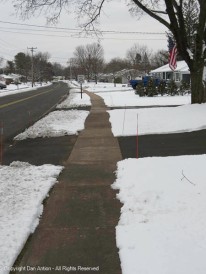 Some neighbors play by the rules and get their sidewalks ready for walkers. 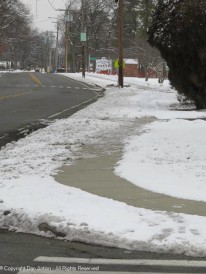 Some neighbors wait for the sun to clear the walk. The way the temp is heading, this will be a mess for several days. 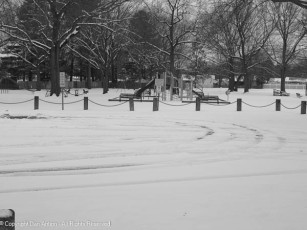 Maddie and I weren’t the only ones to visit the park.

I always smile when I see that someone got up early and did some donuts in the lot.

Not enough snow to bury everything.

This looks safe, but a thin layer of ice had formed. Maddie and I walked in the snow.

New flag. These folks have always had a bicentennial flag.

One of the local Guard base’s C-130s coming in for a landing.

The full moon is rising behind that tree.