A little bit of wind is filling out the flag at Veterans Park.

These guys keep showing up and getting themselves stuck. Yes, I set him free.

Welcome to Saturday, Week-1 of the six remaining weeks of winter, according to our furry friend Phil. We are at the bar, whatever bar has room, but David and I bring Cheryl with us to help with Linda G. Hill’s Stream of Consciousness Saturday challenge. This week’s prompt is:

“Your Friday prompt for Stream of Consciousness Saturday is ‘flag.’ Use it any way you’d like. Have fun!”

And, if we were having a beer, the prompt might let me scratch an itch or two.

“Club? Did Cheryl change the rules around here, David?”

“Cheryl did no such thing, Dan, but he’s been talking about how ‘we’ finally won you over. I don’t get it, but I can get you a beer.”

“And to further welcome him to the club, Cheryl, put that beer on my tab, along with a John Howell’s special.”

“Hang on a minute, Cheryl. I need to know something. David, what club are you talking about?”

“UConn. I saw the picture you posted online of the UConn Women’s Basketball team flag.”

“Ah, I see. Cheryl, please put the drinks on my tab. I’m about to make David sad.”

“OK, Dan. I’ll get the drinks while you two work this out.”

“That image was of my neighbor’s house.”

“Here you go. A cold Corona for the WVU, Pitt and part time Iowa State fan, and a collection of glasses for our deflated friend, But, David, Dan’s neighbor is a fan, so you have that going for you.”

“Thanks Cheryl. I thought I had a convert.”

“At least the drinks are on Dan, now.”

“Do you have a WVU flag at your house Dan?”

“What about Pitt? Or Steeler Nation?”

“What about the American flag?”

“I cherish the American flag, David but I do not have one flying at our house.”

“Because, if I had a flag, I’d want to be good about it. You know, bring it in in bad weather or at night, or keep it illuminated.”

“In other words, you’re lazy.”

“I guess you could say that. I prefer to think of it as being patriotic, but perhaps you’re right.”

“You know, Dan, these days, people read all kinds of meaning into the flying of the flag.”

“That’s stupid, David. The American flag is every American’s flag. Every citizen. Every veteran. Every man, woman and child in this country is represented by that flag. No one can lay claim to it and no one can ascribe meaning to it beyond its inherent meaning.”

“You show pictures of a flag often on your blog. Which one is that?”

“That’s the flag at Veterans Park. Maddie and I walk there, and we stop and acknowledge the people who fought for and who are fighting for the freedom that flag represents.”

“I know, David, umpteen years in the Coast Guard.”

“Correct. I was protecting you before you could spell Coast Guard.”

“Cheryl, give my friend another splash of John Howell’s bourbon, top off his seltzer and freshen his ice.”

“With pleasure, Dan. I’ll bring you another Corona, too. You boys want something to eat?”

“If Dan is still buying, I could go for a slice or three of a pepperoni pizza.”

“Thank you, David, and everyone else who ever served to protect that flag and everything – and every one – it stands for.”

Morning after the storm.

After five days, we set out for a short walk. 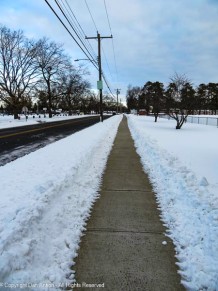 Maddie doesn’t like staying on the walk, but we don’t seem to have much choice.

We won’t be visiting the park for a while.

Winter is beautiful in black and white.

Sunset after the storm.

Smokey has his peanut and is climbing up and over the lilacs.

“I hope you brought peanuts, because I have to dig a long way to get to the ground.” 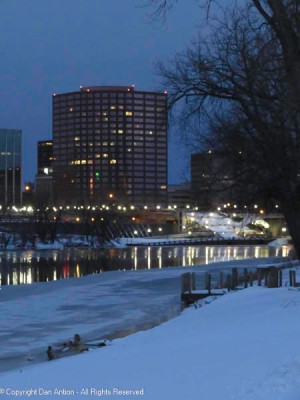 I did manage a quick trip to my favorite park. More pics from here on Monday.

The gray squirrels love to sit on this stub of a branch to eat their peanuts.

Maddie wanted to see her neighbor.

I think he’s trying to make a snow angel.