Look Behind the Curtain

When I tell you the origin of this post, many of you might want to skip to the gallery and thank your quick wits or lucky stars that you dodged a technical bullet. I hope you stay for the story, as celebrity chef Nick Stellino says at the beginning of his show. I hope you stay because there is an important message, something to think about buried in all the mumbo-jumbo.

I was reading a story in Tech Republic about a series of research reports called “Predicts 2021” recently released by the analyst firm Gartner. I know, I know, “Dan, it’s Monday morning and my coffee isn’t strong enough for this.” I’m sorry, but this won’t fit on one line, it doesn’t have a door and David and Cheryl would throw me out of the bar if I brought this up on a Saturday. But I wouldn’t do this if it wasn’t important.

Tech Republic says that the Gartner report “outlines the serious, wide-reaching ethical and social problems it predicts artificial intelligence (AI) to cause in the next several years.”

Hang on, the report talks about five things. I’m only going to mention one, and I promise, I won’t go into the weeds. I’m showing you their five, just in case you want to go read the report – but just reading the topics will hurt your head.

If you’re still here, thank you. My first observation, “harm/misuse mitigation” will become part of the solution a year after the bad guys will have begun to be successful using the technology for evil.

That seems to be the way technology in the wild works. We have had horrible problems with spam phone calls and spam texts for years, but it’s only recently that the government and industry has taken steps to stop them – and those have been baby steps.

Gartner’s point is “blah, blah, blah, things are going to get bad before they get better.”

I would add “If they ever get better.” I add that because of what Gartner did, what Gartner always does, which is to consider the next five years as a single unit. If they didn’t, people wouldn’t buy their reports.

The next five years is not a unit!

The next five years will be part of a continuum that started eons ago and will continue for more eons. Nothing Gartner says about 2025 can be considered rock solid, since they don’t really understand what will happen between today and 2025. However, there is one thing that I know about the five things they mention:

Synthetic populations (1) will not help!

I know, I actually used a footnote in a blog post. Hang on, I’m almost done.

Oh, they might help companies and governments avoid lawsuits regarding people’s privacy, but two bad things are going to happen during the construction of those “synthetic” populations:

Companies are going to cut corners – They have data from real populations. They have your data. Where you shopped, what you bought, where you traveled, what you eat, drink, read, watch and where, when, and how well you sleep (if you’re wearing an Apple Watch or similar device). They will say that they’re going to put this all in a blender, push the Puree button and eliminate all the you from that which is yours, but I don’t believe them.

Why does this matter to you?

Social engineering is the sanitized term for the elaborate process by which criminals try to convince you to give them your credit card number, your Social Security Number, your bank account number and your money. It’s an ongoing dangerous operation that reaches your phone, email and blog comments on a daily basis.

Deepfake is the real, albeit often politicized term referring to text, images, soundbites, video, and news stories that look and sound so realistic that you want to believe your eyes and ears, even though your brain is saying, “this is bullsh*t.”

It is already hard to know what is true. It’s going to get harder. You’re going to have to get better. 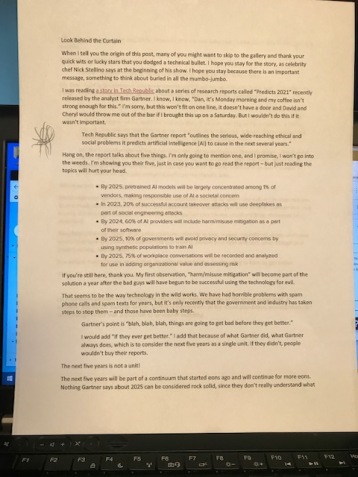 I asked the Editor to mark the point she was bored out of her skull. 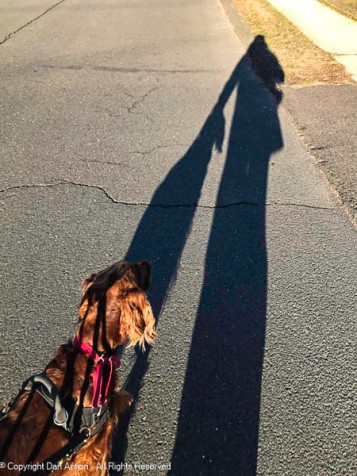 It would have been warmer if we had walked later, but Maddie wasn’t in the mood to wait. 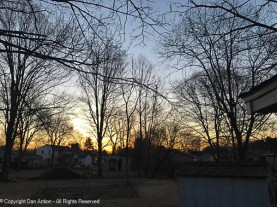 I won’t be up early enough to see too many more of these.

MuMu has found her sunny spot.

This is the tree I use to gauge the seasons. It’s been bare for months, but it’s budding out.

“You stay there. I’m going to get some peanuts.”

Maddie is watching the squirrels.

I was trying to photograph a bird on the wire. This guy scared both of us.

I love they way they hold the peanuts like an ice cream cone.

“If I give you a pretty pose, will you give me a peanut?” 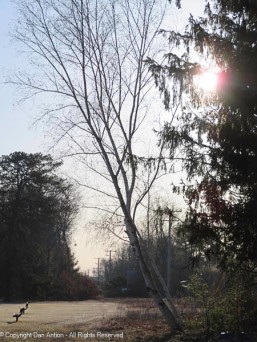 It’s easy to see that we won’t be able to see Jinx for too much longer.

I think this is a busted formation.

Maddie loves to steal my spot.