I used to drive through this district on occasion when I had stopped at Maddie’s for breakfast on my way to work. I’ll spare you the images of pancakes and over-medium eggs, this is all about doors. The history of this district presented below is taken from the National Registry of Historic Places nomination form.

The Naubuc Avenue-Broad Street Historic District encompasses a generally well-preserved village that embodies the agrarian and maritime history of much of East Hartford. It derives particular importance from its nineteenth-century association with tobacco cultivation and the regional silver industry, and its later development as an early suburban residential community. The Naubuc Avenue-Broad Street Historic District is architecturally significant for its large collection of well-preserved vernacular domestic architecture, in which the distinctive imprint of local country builders is found on many types and styles from the early National period through the late nineteenth century. It also contains a number of generally well-preserved early twentieth-century houses.

A few of the houses featured today were individually described in the nomination form. Normally, I’d try to incorporate this information into the captions for my photographs. However, WordPress has been giving my fits over photos and captions, so I’m including the text here and I’ll add a reference in the captain if WordPress allows it. The descriptions below are for four houses of which I have current and historic photos.

The 1797 Captain Jehiel Risley House farther south on Naubuc Avenue was built of brick with integral end chimneys. Its unbalanced five-bay facade has a recessed doorway well to the left of center. Variations in the bond pattern and the type of brick indicate that it evolved from a one-story gambrel-roofed structure. Softer brick on the first-story is laid in a variant of American bond, with header courses at random intervals. The walls above the first-floor windows, which are capped with flared soldier courses, are laid with different brick and a wider spacing between the header courses. The original roof pattern is defined by the pattern of dissimilar brick on the end elevations.

The house built for the Reverend Benjamin C. Phelps, is an Octagon, a type designed and promoted by Orson Squire Fowler at mid-century. Although it generally follows Fowler’s design principals, instead of the usual masonry, it utilized plank-wall construction. Another departure is the placement of the entrance on the south side, away from the road, instead of the middle of the facade.

More houses were built or remodeled in the district through the turn of the twentieth century, mainly in the Queen Anne style. As interpreted by local builders, the basis for the style is an intersecting gable plan, as found in two houses constructed in the 1890s. The cross-gabled main block of the Risley-Fox House is detailed with imbricated shingles and an open facade porch. It is attached to an earlier house, which was moved back on the site and is now the rear ell. A simpler version built for August Noch across the street about 1903 also has retained its original porch, which is highlighted with sawn brackets and a spindle course.

Most of these houses were built in the 1920s on small lots, especially on Broad Street, and many have original garages. Because of the then common perception that automobiles were a fire hazard, these garages are placed to one side at the rear of the lots. 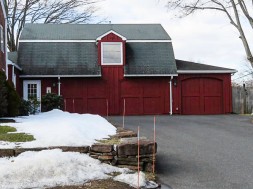 This is the garage / carriage house of Captain Jehiel Risley House. 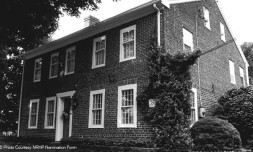 The octagon house in 1985, from the nomination form.

This is the house, today, that had been a factory in the 1800s. The wide entrance door is the only element that hints at that original use. 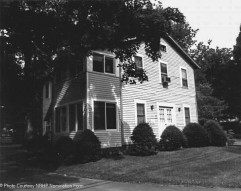 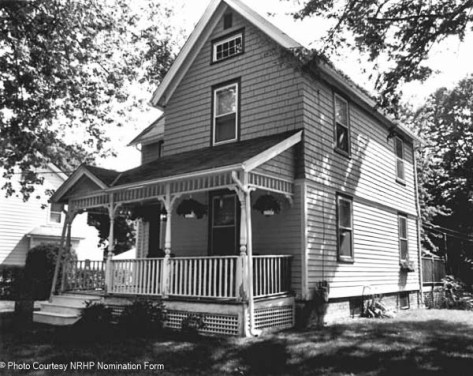 This house is was built in 1840 and appears to be in excellent shape.

NRHP this is the house from 1840. I think it looks better today than it did in the early 1980s when this picture was taken. 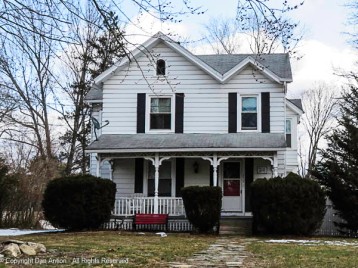 This is the first house I saw after entering the historic district. IT appears to have been expanded several times.

Front of the first house I saw upon entering the district.