I Know What I Want!

Today’s post should be especially interesting to bloggers who begin their blog posts in Word (or another editor) and to some of my favorite bloggers – poets.

One of the complaints I hear most often about the Block Editor is that it’s hard to get the text to look the way you want it to look. Not only do I hear this complaint, I’ve uttered it many times, particularly on Friday afternoons. My typical Saturday post is a stream of consciousness block (no pun intended) of tagless dialog between friends at a bar. I write those posts, as I do all my blog posts, in Word. When I copy and paste my dialog into WordPress, I end up with 35 – 65 blocks!  What’s a boy to do?

What if I told you that you could write a post in Word, format it kinda-sorta the way you like, copy and paste it into the Block Editor and have it look like what you wrote? Introducing the Preformatted Block.

Note: for the sake of clarity, everything shown in the blue area below was written in Word, copied and pasted into a single Preformatted Block – I swear. What you see below is what I wrote in Word.

You see, a preformatted block accepts and preserves the formatting of the text that is pasted into it. Note: you can’t rely on Word Styles to format the text, you need to go into “typewriter” mode. Also, you can still make minor format adjustments once the text is in WordPress but you do not have the full range of tools available.

In a similar vein, the Verse Block is designed to let poets control line and character spacing in a way that is necessary to complement their well-chosen words. First, let’s look at the Verse Block showing one of my favorite Grooks.

Now, lets have some block fun. I’m going to insert a column block and add two columns. I’m going to set each column to hold a Verse Block. I’m going to feature two of my favorites, friends from a writing group I have belonged to for a while. I think you know them.

Again, the blocks in use here are:

These special blocks are not as powerful as Word, or as a Paragraph block for that matter, and they will not accept every format technique you can create in Word. But, they are much easier to work with than the default text block when you want/need to control line spacing.

There are many types of blocks available in the Block Editor. Personally, I think they all need a lot of development work. That said, I encourage you to experiment with them as I have.

This one is still on the tree. 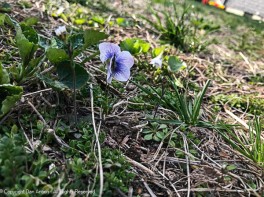 I’m sure this is some kind of weed, but we like seeing them.

“What do you think, Maddie. You us for a walk in the fog?”

It’s starting to bud out. 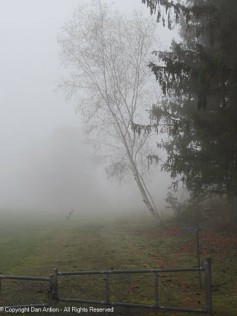 The utility access road is much harder to see today. 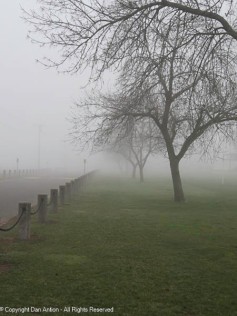 “You still up for this, Maddie?” – That’s an affirmative.

There’s a baseball field behind those trees.

Even in the fog, it’s a wonderful sight.

I think this might be my best capture of Jinx.

Looking into our back yard on our way home.

The squirrels like to get up on some higher perch to eat their peanuts.

Our bunny was out when Maddie and I came back from our walk, and I still had my camera.

Spring flowers in our neighbor’s yard.