I want to begin with a brief reminder that we are now in the final week of the First Annual Writing Challenge. We have had quite a few entries so far, and I think there are a couple more entries arriving this week. Feel free to join the challenge.

After touring the Dr. Seuss Museum, I didn’t have much time to tour The Quadrangle–Mattoon Street Historic District in which the museum is located. The district includes a variety of buildings, from residences to churches, to government buildings. The quadrangle area is home to the Springfield museums and there are two cathedrals located on the quad as well – both the Roman Catholic Diocese and the Episcopal Diocese of Western Massachusetts are headquartered in Springfield.

In addition to the cathedrals, both diocese have administrative buildings in the area. Given the number of interesting doors, I am going to spread this out over two weeks. There are also a few other interesting buildings in the area. I don’t know much about them, but I know what I like. My usual source for information on historic districts, the US National Registry of Historic Places has not yet made the information on this district available in their on-line repository.

My bad research luck continued when I arrived at The Episcopal Cathedral website. First, my browser security program advised me that “this site may have been hacked” and nothing on the page behaves as one would expect. So, I offer you the following (edited) excerpt from Wikipedia (yes, yes, I know…)

“…The Rev’d Henry Washington Lee, the son of Col. Lee, took charge of the congregation on October 28, 1838 and it was reorganized. Henry Lee went on to become the first Episcopal Bishop of Iowa in 1854.

Property was acquired in 1839 and a new church was built. … The new church was a rectangular building with a square turreted cupola. The building was enlarged in 1851 after then rector, Abram Newkirk Littlejohn recognized the need to expand. In addition to more seating, the project added a chancel, vestry room and library…

The parish continued to grow and by the 1870s when it was determined a larger church was needed, and the present church was built at a new site on Chestnut Street that was acquired in 1874. Construction began the same year and the first service was held on May 21, 1876. A new Processional Cross and Office Lights (all still in use today) were designed by the famous Henry Vaughan as early works by the now famous architect of the Washington National Cathedral in Washington, D.C., and produced by the famous Gorham company. The tower of the new church cracked early on and had to be removed. It was rebuilt in 1927.”

Not much information, but I think you will enjoy the photos. 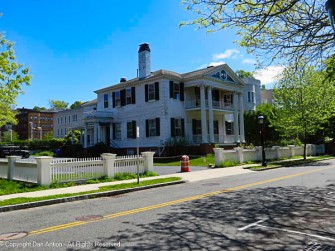 This was the best shot I could get of the door to this building without violating the intention of that chain.

There should be a door if there’s a balcony.

Ooooh, brick building, narrow wooden door. I like this.

This building on the corner is showing some door-promise.

I like the narrow door and the ghost window.

I don’t know what this building is, but I love that entrance.

The details are impressive.

This is the south side of the Episcopal cathedral.

One of the entrances to the cathedral. 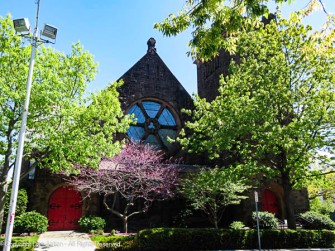 I would love to see that window from the inside. 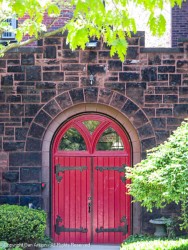 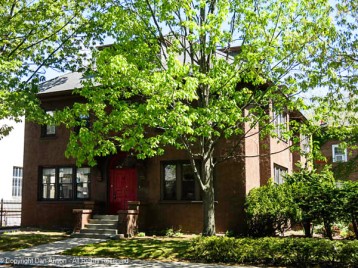 This is an office building of the Episcopal church.

Episcopal offices, I wouldn’t mind walking through that door to go to work.