I Wonder if He Knew?

This being the last week of the First Annual Thursday Doors Writing Challenge, and my being the host of Thursday Doors, it would seem that I should participate in this challenge. On the other hand, participating in a writing challenge isn’t something I normally do. For those of you that know me well, you know that writing poetry is something I certainly don’t normally do. But that is what I’ve done.

In case you think that this might not be Dan, let me offer a little backstory (see, now you know it’s me). The doors I offered for inspiration when the challenge began were from the Commons at the Cathedral of Learning at the University of Pittsburgh. The Commons is a three-story great hall in that grand gothic building.

Many of you know about the Commons because I’ve featured it here before. Some of you also know that when I was in graduate school at the University of Pittsburgh, almost all of my classes were in the Cathedral, including some in project management. What most of you do not know is that my great grandfather was a construction foreman when the Cathedral was being built. Hence, my contribution to the challenge.

I wonder if he knew
If my Great granddad could see
Do you think he understood?
He was building this for me

I wonder if he knew
Five decades since his finish
His daughter’s youngest grandson
Daydreaming, would bear witness 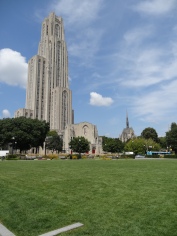 The Cathedral of Learning as seen from the entrance to Heinz Chapel. 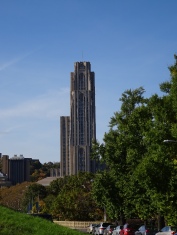 When I attended the University of Pittsburgh, my classes were in that building (about 2/3s of the way up). 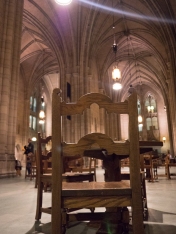 Fortunately, Faith thinks about getting low for a photo. I like this view of the Commons.

The Cathedral has several working fireplaces on the outside walls of the Commons. 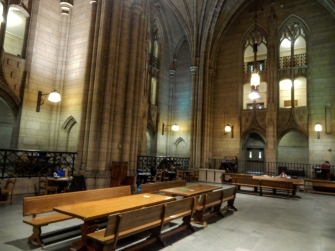 The Commons is a student space. The openings on the 2nd and 3rd floor are where the study carrels are. 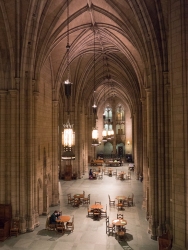 Faith snagged this image of the Commons from thr 2nd floor study area.

Faith captured the details of the true Gothic arches.

The Cathedral is always busy. Several groups of families were touring the University the day we were there. They always show off Cathy.

If you peek in, you’ll see that it’s a beautiful storage area.

This is outside the room. I thought I’d include it to remind you of where this room is.

This may be one of the Nationality rooms. I had a non-business class in this room.

That’s the Commons of the Cathedral of Learning, home to the Graduate School of Business in 1977. This picture was taken from one of the study carrels on the 2nd and 3rd floor.