We are in the middle of our second 90-degree heatwave of 2021. By the time most of you read this post, Maddie and I will have returned from our walk. She’s been nudging me off the couch earlier and earlier, but today, it’s my plan – the heat is arriving earlier each day. We sat outside on Saturday, at 10:30 am, and it was 85°f (29°c) on its way to 93°f. Three months ago, we were placing Maddie’s cot in the sun to stay warm. Today, we only sit in the shade.

Along with the capitulations I will make to Mother Nature, I will be making my annual adjustment to my blog posting schedule, in deference to the clock. Monday is the hardest day for me to have a post prepared. Saturday and Sunday are busy days, and I’ve never liked forcing myself to write something – writing should be fun. I will have photos to share, and I may include a little explanation for the D-I-Y fans in the audience. That’s what I have today.

Some may recall that I mothballed my garage/workshop renovation in November, when we started putting the cars in the garage. I did manage to get all my tools in the workshop space, but since there was still a wall dividing that space roughly in half, I didn’t have room to work. Three weeks ago, we moved the cars out, I moved tools and toolboxes into the garage, and I started making my way toward that wall.

For well over twenty-five years, the back wall of the garage has been used for lumber storage. Several years ago, I started working my way through the pile. You may recall the bookcase I built last year. The pile remained, but it was easy to relocate to a temporary home across two sawhorses. Its permanent home remains a mystery – some will certainly be at a resort called “Kindling.”

Once the wall lumber was removed, I had to disconnect, reroute and, in some cases, remove electrical wiring. Most of the wires now dangle in an annoying tangle, but rest assured, they will be trimmed, routed properly and safely secured when I am done. The original plan was to replace the existing header that carries to weight of the storage area above the garage. This is no ordinary storage area. Flanked on both sides by bridge trusses, the storage area actually holds up the garage ceiling and roof structure. Imagine my surprise when I realized there was no header supporting the trusses. Each truss rested on a short piece of 2×6. The storage area between the trusses (at the end) was supported by a narrow board that was never meant to carry a load.

Because there was no header, my plan to augment the structure with a more substantial header beneath the top plate of the wall, was a non-starter. That would leave the existing, inadequate, and unsafe structure in place. I decided to install a new, proper header across the wall, supported by wider support boards going all the way to the concrete foundation. This header carries the trusses, anchors the original 2x6s and supports the storage floor.

You might ask/think/wonder “if the existing supports held things up for over 25 years, why bother to improve them?”

If you run into the wall at the side of any door in your house, you will feel more pain than the door. The walls, and the opening for the door comprise a structural system that can withstand that kind of pressure. On the other hand, picture kicking one leg off the base of a chair. The chair will fall.

Without a header in place, each small side wall at the ends of a six-foot (1.8m) opening would be independent of the other. If I were to hit either wall with a tool or a load of lumber I was moving, I could knock the support out from under one of two trusses that literally hold up my entire garage ceiling and roof. Being buried in a pile of rubble is not in my plans.

The pictures in the gallery might help you make some sense of the above explanation. The previous home owner – the one who built this garage — died years ago, so…

This wall has held lumber racks for 25 years. They have to go.

The wood is gone. The racks are next, then all the little utility shelves and supports.

The wires all have to be moved – they are exactly where the new header needs to be. 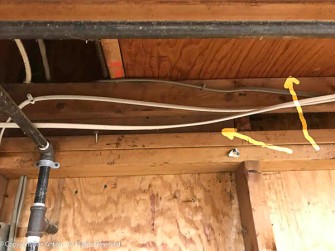 The board at the left-pointing arrow is one of the 2×6 supports. The up-arrow points to the floor of the storage area. 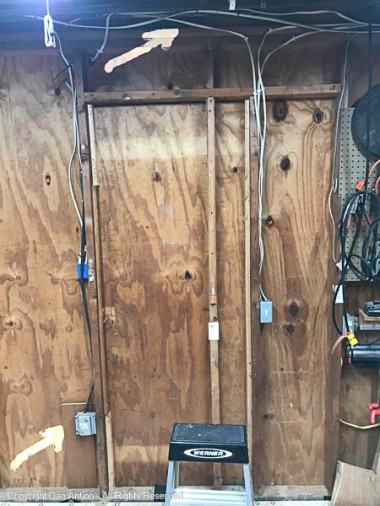 The upper wires had to be pulled off. They will go back up (a little neater) later. The lower outlet is being removed along with the wall it’s mounted on).

The wires are loose. the wall is ready for the new header.

The confined space gave me no room to pry the old structure out. I used a winch to pull it down. It broke in half, but a second pull completed the job. 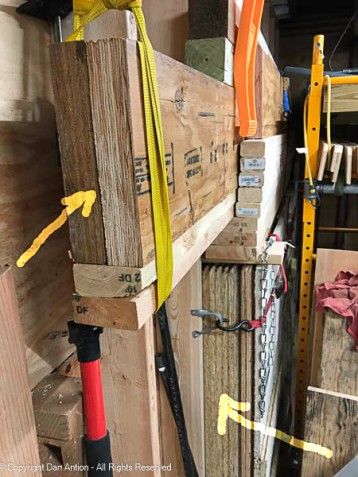 This material has been stored here all winter. It’s time to start using it. The lower arrow is subflooring for the other room. The upper arrow is the LVL (laminated veneer lumber) that will form the header.

I lifted the header boards up to within a few inches of their destination. Then jacked them the rest of the way. Much easier than trying to move them in place by hand. 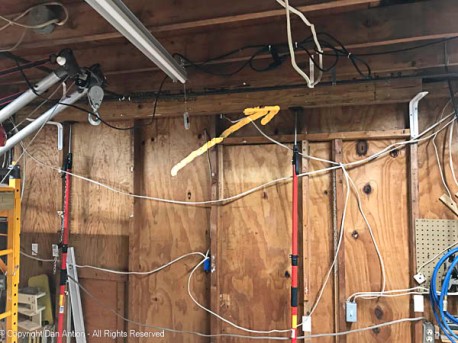 The header boards were lifted independently, and then jacked into place. They’ve been temporarily secured in place.

The new header is in place. Supports will be added.

Given the price of lumber, I measured three times and clearly marked where the notch goes. 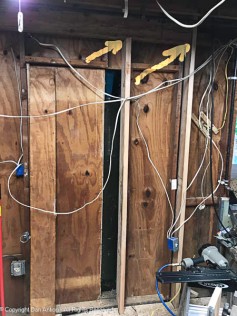 2×8 supports added to support the old structure and the new header.

We’ve been sitting here, before the sun gets over the roof. I need to take the cushion of Maddie’s cot.