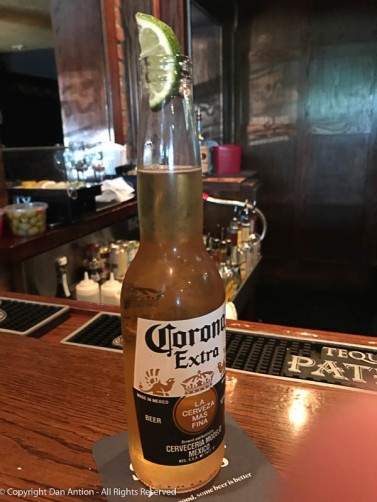 John Howell’s Bourbon (with a little help from PhotoShop)

We are at the bar, and we have “enjoyed” two sunny days although the temperatures hit 92°f (33°c) yesterday) before the rain returned. We’re going to have a cold adult beverage as we solve the world’s problems and try to handle Linda G. Hill’s Stream of Consciousness Saturday prompt,

So many choices, this will be difficult, but we shall endeavor to enjoy – that seems to be required.

“I do. Set him up with a John Howell’s Special, he’ll be here soon and it’s my week to pay.”

“Cheryl, I know I tip better than David, but I’m not sure it’s ‘cha-ching’ worthy.”

“David. Where have you been?”

“I was here on time, but ‘Roundabout’ was on the radio. You know, the song by Yes.”

“Because the idiots in charge of traffic engineering around here are infatuated with them.”

“Here you go guys, one cold Corona, one John Howell’s bourbon, a snifter of seltzer and a glass of ice.”

“The traffic circles you speak of, do you mean the ones on Hayden Station Road? They are annoying, but I think they were added for speed control.”

“No, those two are annoying, but they’re small, they work reasonably well and that road doesn’t have much traffic. I’m talking about the ones on Rainbow Road, the ones they’re building at the airport and the one they’re going to build in our town.”

“You may not like them, Dan but they are efficient. By the away, around here, we call them traffic circles.”

“Have you been through the airport lately?”

“When you exit the airport, or the airport parking garage, the roundabout is NOT a circle. It’s more like a kidney with finger stuck in it.”

“No, and if you want to go from the airport back into Windsor Locks, instead of Route Twenty, you have to jog around the kidney shape and enter a different section of the roundabout. It’s crazy.”

“What? What’s that supposed to mean?”

“Just that, well, you didn’t grow up in New England. You’re not familiar with traffic circles.”

“If you ask me, most of the people who grew up in New England aren’t familiar with them either. No one acts as if they know what they’re doing once they get in there, and they certainly don’t understand what ‘yield’ means.”

“Dan, I think you’re being a little harsh.”

“David, people in this town act like ‘yield’ is French for, go like hell, or that guy will get ahead of you.”

“Perhaps, but they aren’t any better at intersections controlled by traffic lights. What would you have us do, put a cop at every intersection?”

“David, do you realize that they are planning to replace all the traffic lights on the road to the airport with roundabouts?”

“All of them. NASCAR after NASCAR from one end to the other.”

“Are you two ready for another ro…, I’m sorry, I don’t want to use that word. Would you like more bourbon? More beer?”

“Yeah, I got that, Dan. If you ask me, you seem a little agitated over it. It’s not like they’re putting one outside the bar.”

“Cheryl, in the past ten years, they’ve added five traffic circles within a five-mile radius, and they’re planning to add four more.”

“So, ♫call it morning driving thru the sound and even in the valley♫…is that what you’re saying?”

“You sing that better than I ever could Cheryl. It describes pretty well how I feel driving through the airport now.”

“I suggest you add some wings to that beer. You know, ♫spend the day your way♫.”

“Hahaha – Ok, Cheryl. Set up a round of twenty wings. Blue Cheese for the old man and Parm Pep for me.”

Special announcement – Next week, David and I will be entertaining a special guest. Teagan R. Geneviene will be joining us to discuss her current projects.

PS – Below the gallery is the 45-version of “Roundabout” This version runs about 4 minutes less than the album version.

PPS – As we recently discovered, if you want to read the captions in the slide show, you need to click on the ‘i’ in the little circle – Ⓘ symbol. Thanks WordPress.

Hot and hazy at 7:15 am. As the sun dries up all these puddles, the humidity rises.

Good to see I’m not the only one who likes seeing puddles. 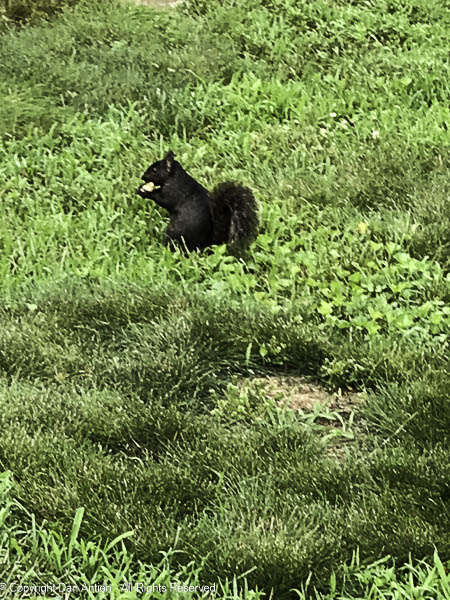 Smokey came out after the storm.

This Rose of Sharon seems to be showing off. 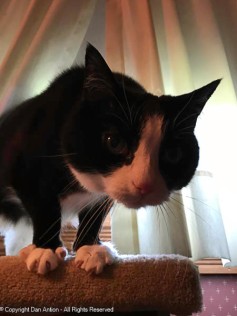 I didn’t realize I had captured a bee in this blossom.

Maddie, I’m trying to get a picture of this leaf.

There we go. This time, without the dog.

We haven’t seen much sunshine around here in the past two weeks. 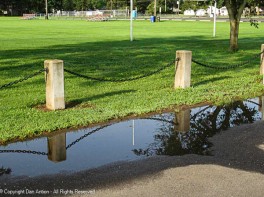 Usually, this puddle is dry before we get to it. Lately, we’ve been walking as soon as the rain stops. 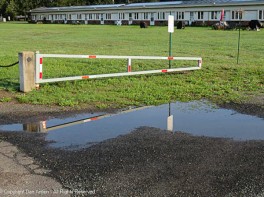 I’m not sure the field was dry enough to mow.

Proud in the sun.