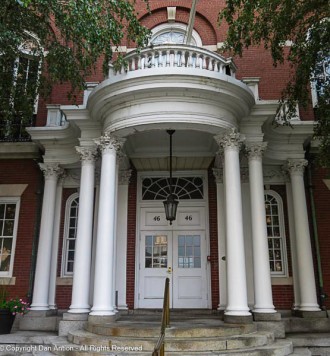 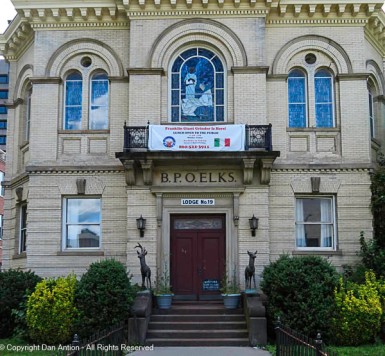 Both of these buildings were added to the National Registry of Historic Places in the early 1980s, about the time I arrived in Hartford. My best friend attended a meeting in the Elks lodge and told me that it’s a remarkable building – an assessment supported by numerous comments on other websites. The Hartford Club, a Men’s club organized in 1873 has been the largest luncheon club in the city since it opened. I have attended meetings, dinners, and parties in this club many times. I have no pictures from the interior, but you can view some at the club’s website.

The NRHP nomination form states, “In the Hartford Club, the style, design and scale are almost domestic in character” However, while the form doesn’t offer much in the way of description, it does include the following paragraph that is remarkably well suited for this blog challenge:

The single most important decorative element of the facade is the 1-story, flat-roofed, Corinthian portico, that is approached by broad stone steps. The portico is curvilinear in plan with clusters of three columns, right and left, supporting the entablature. There is an additional column at each side near the wall, in front of a pilaster, while pilasters flank the glazed, double door that has windows on either side and a fanlight above. The portico has a wooden balustrade that follows the curvilinear plan. On either side of the portico, in the central section of the facade, there is an 8-over-8 window. In each end section there is an 8-over-12 window flanked by glazing one light wide, in a tripartite effect. All of these windows have splayed lintels with key blocks and sills of limestone.

Like many social clubs across the country, The Hartford Club has suffered financially in recent years. The members contributed to a fund drive in the early part of this century. They have tried to offer more modern amenities in the club to attract new members, including women.

Two doors down from The Hartford Club is a Neo-Classical Revival style that houses Lodge No. 19 of the Benevolent and Protective Order of Elks. Similar to the nomination form included above is this description of the front entrance to the Elks Lodge:

The central front entrance is approached by broad brownstone steps between heavy piers on which stand iron figures of elk. The double front door under stained glass transom has molded architrave and molded cornice cap with dentil course supported by consoles. Iron light fixtures flank the doorway. In the fascia over the door there is bronze lettering reading “B.P.O.Elks.'” flanked by heavy double consoles that support an iron balcony. The door surround, fascia and consoles are limestone.

A high, quarry-faced brownstone foundation wall with chiseled limestone water table, left’ and right of the front steps, is interrupted in the chamfers for basement windows. At the first floor, there are two 1-over-l windows on each side of the door. They have limestone sills and splayed lintels of vertically laid brick with limestone console keys. Above the windows, smooth limestone over a course of small blocks forms a first-floor cornice or string course.

While I have no idea what the future holds for these two buildings, I can well imagine the role they have played in the past. In an era when the city planners worked closely with the men in charge of the insurance companies headquartered in Hartford, I’m sure that much of the city’s history was charted in the lounge of The Hartford Club. I hope people in the future will come to understand the value of person-to-person, face-to-face communication and the benefits of this type of social engagement. 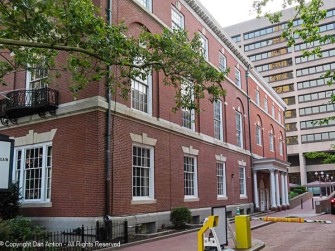 Entrance to parking and to the first floor.

One of the side entrances to The Hartford Club.

The third floor originally housed accommodations for visitors. The window details and roof line are interesting.

These decorative cast arches sit above the second floor windows. 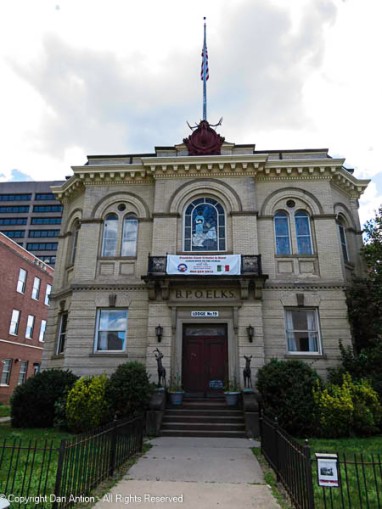 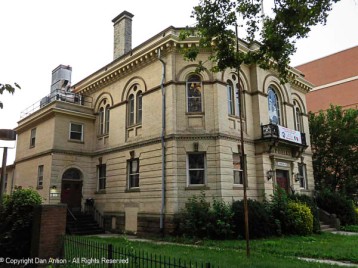 Side view of the Elks lodge showing the northwest corner detail. 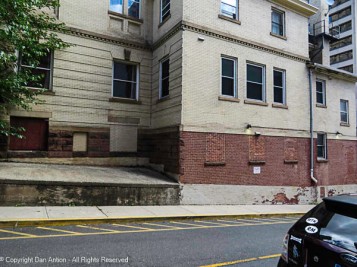 Lots of ghost windows and doors on the side of BPOE Lodge. 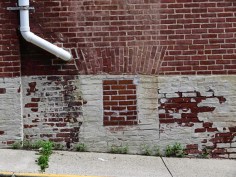 I’m guessing that that is a ghost coal chute.

Back of BPOE Lodge

This beauty as parked behind the BPOE lodge. I couldn’t resist.

BPOE Lodge as submitted with the nomination form.