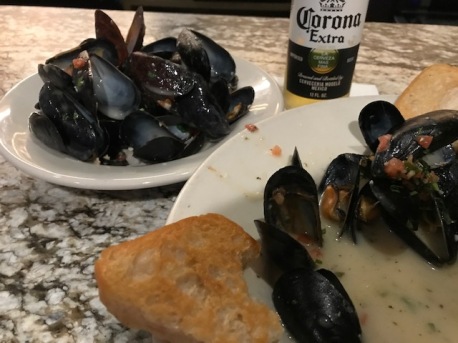 It’s Saturday. It’s hot. It’s humid. Nothing about this day feels lucky, but David tells me it’s my lucky day. I don’t know what he means, but it plays well with the Stream of Consciousness Saturday prompt from Linda G. Hill, so I’ll play along. Her prompt is,

“Your Friday prompt for Stream of Consciousness Saturday is ‘luck.’ Use it any way you’d like. Enjoy!”

If we were having a beer, I’d be trying to figure out what you mean.

“Are you talking about me, David?”

“Yes, Dan. Who else would I be talking about?”

“Well, with that announcement, I’d think maybe a celebrity of something.”

“A celebrity? In this place? Dan, you and David are just about the best that I get. I don’t see the likes of Sir Anthony Hopkins or that straight up sexy Kurt Russell walking through those doors.”

“Hmm, David kinda looks like Anthony Hopkins, and I…”

“Don’t look anything like Kurt Russell. You want a Corona, Dan?”

“Come again. How is it Dan’s lucky day?”

“Cheryl, tell him the other good news.”

“What? Did Tom Hanks come in? Robin Williams, Chris Hemsworth?”

“Robin Williams is dead, and Chris Hemsworth is, if you forgive my saying, a tad young for you.”

“Tom Hanks is alive, and he’s a tad older than me.”

“That’s true, but he’s not walking in this bar today. Is there something else that’s special about this day?”

“True again. I loved him in Patton, but…”

“Cheryl, tell him about the specials.”

“Oh, I see where you’re going, David. Dan, we have mussels on the menu for the first time in seventeen months.”

“Mussels, and David is paying. Maybe this is my lucky day.”

“Speaking of muscles, Ryan Reynolds could walk through that door any time.”

“Cheryl, I don’t think that’s going to happen. Please, put an order of mussels on David’s tab before he comes to his senses.”

“Will do, Dan. Here’s your Corona. David, here’s your John Howell’s bourbon, your snifter of seltzer and a glass of ice.”

“Three, in the bourbon. Like Daniel Craig, Keanu Reeves and Tom Cruise.”

“Meaning those guys are cherry, or in the bourbon?”

“Well, you seem hung up on this theme.”

“I know, I’m sorry. It’s just that Dan got me thinking about who could walk through that door.”

“Yes, unless Richard Harris walked in.”

“Well, it’s not like any of those living guys are going to walk in. A girl can dream, right?”

“Dan, the next time I tell you it’s your lucky day, please don’t ask any questions.”

“I kept thinking she was going to bring that list down to our level.”

“Highly unlikely. You guys are more like Tony Randall and Jack Klugman, you know, The Odd Couple.”

“I’m OK with that Cheryl, as long as David is playing the role of Felix.”

“No one is asking me, but I can live with that.”

“Good. Here’s an order of mussels. I only brought one, Can you guys share, or should I put another order in?”

“We can share. I don’t want to take advantage of David’s generosity.”

“Cheryl, like you and that door, he’s not that lucky.”

“That’s OK. I wouldn’t trade my hubs for any of them?”

“Awww. Oh, what the heck. Put another order of mussels in.”

“David, you really are a romantic.” “Cheers, Dan.”

Note: Cheryl was kind enough to send in her choices, but she couldn’t decide so I used them all. The comparison below is what I’ve been doing this week before it gets too hot each day.

Maddie and I are heading down this path.

These water drops won’t last very ling in this heat.

Opening up after the thunderstorm.

Shrouded in fog, the flag is still flying.

We’ve been trying to get out ahead of the hot and humid days.

The sun is burning through the fog. 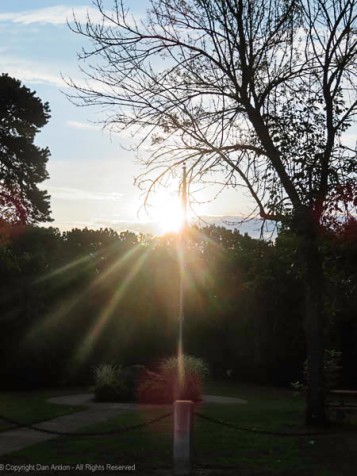 The flag is flying in there. I couldn’t see it in the viewfinder.

We walked early this week to beat the heat.

Maddie, I am trying to get a picture of that pine cone.

It took about six shots, but Maddie finally moved. 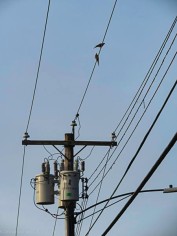 Two birds in one photo.Birds and transformers for Peter.

Eat that quickly or it’s going to be a roasted peanut. 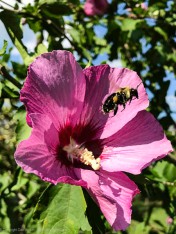