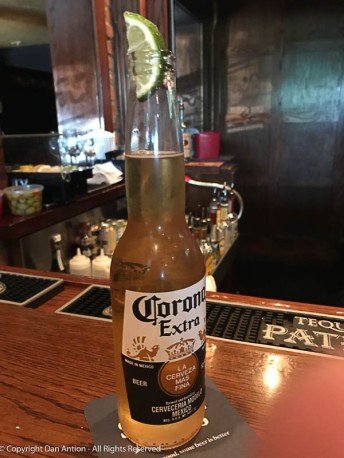 The Editor would have preferred I take this approach.

MuMu is back on her shelf.

It’s Saturday. We’re waiting to see if hurricane Henri is going to pay us a visit, or maybe tropical storm Henri will come in his place. Or maybe we’ll just get a truckload of rain. We had almost 4″ (10cm) of rain on Thursday. In the meantime, David and I will enjoy a cold beverage and try to decipher Linda G. Hill’s Stream of Consciousness Saturday prompt,

“Your Friday prompt for Stream of Consciousness Saturday is ‘ode.’ Find a one- or two-syllable word that rhymes with ‘ode,’ or use the word ‘ode.’ Have fun!”

If we were having a beer, you would be trying to stop me from geeking out.

“Good afternoon, David. Note that I didn’t reply with anything indicating your age.”

“Hi Cheryl. Give the ol… David a John Howell’s Special and I will have my usual.”

“I meant to tell you, Dan. I haven’t been getting notifications of your new blog posts lately.”

“I don’t know. The Happiness Engineers don’t know, but they assure me they are working hard to figure it out.”

“Do you get notifications from them?”

“Sometimes. Sometimes I just check the thread on GitHub.”

“It’s a place where developers manage their source code.”

“Ok. ‘developers’ – “manage” – ‘source code’ – three strikes, you are out. If we continue this conversation, my head is going to explode.”

“Here you go guys. A glass of bourbon, a snifter of seltzer, a glass of ice and three cherries. Phew, Dan, here’s your beer. And, David, if your head is going to explode, please take it outside.”

“Thank you, Cheryl. Nothing will explode. The conversation is mostly over.”

“And that would be?”

“Well, if I understand your world, the programs you write are written in a language. It’s not really code.”

“That might be a bit pedantic, David. We write programs in a language, but it’s not directly understandable by humans.”

“Will you be wanting another beer, Dan?”

“Cheryl, can I have a napkin?”

“Can I borrow your pen?”

“David, what on earth are you doing?

“It’s Morse Code. It’s how I made my living for over ten years. By the way, it means. ‘Dan would like a beer’ – in case you’re interested.”

“But you did. Unless you want to write out a big tip, I’d like it back.”

“OK, David. I see your point. I’d like to suggest we agree that there are various levels of ‘code’ and leave it at that.”

“Fair enough, Dan. I don’t want your head to explode.”

“Did you really talk like this for ten years?”

“I was a radioman in the Coast Guard, it’s what we did.”

“Yeah, but there had to be easier means of communicating than pecking out dots and dashes.”

“In the seventies, yes. The Navy and the Guard abandoned Morse Code, but I was on a cutter during the sixties.”

“Do you guys want another round? And please answer in English.”

“Cheryl, how did you figure that out?”

“The first word is pretty long, and the last word as two identical letters. In a place like this, what else would it be?”

Note: When the Editor returned my draft, she suggested that I should have gone with “Ode to Joy” – I guess I should have checked with her first.

Thursday’s storm brought a lot of leaves and branches down.

We had some rain this week. 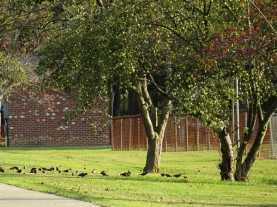 “Finish up guys. The crows are practicing.” 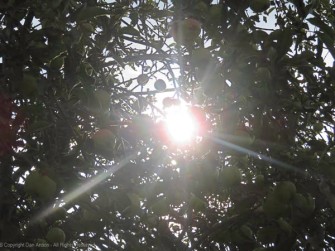 Smokey’s cousin is getting ready for winter.

Our flags are still at half staff in honor of the firefighter who lost his life in the line of duty last weekend. 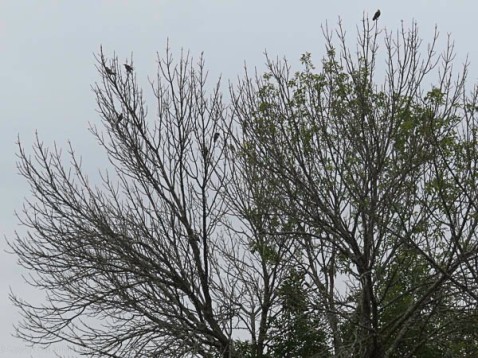 “I think I see the crows coming.”

“Where are those crows. How long are they going to make us wait?”

“Where are those little birds?”

We had quite a bit of rain on Thursday. 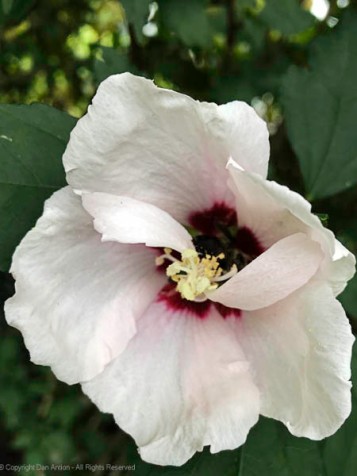 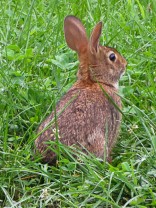 The grass isn’t that high, the bunny is that small.

I took this while doing physical therapy exercises on a foam roll. MiMi doesn’t understand.