Today is bonus One-liner Day. I have the one-liner I saved from Saturday night when our daughter Faith and I attended a baseball game. And I have a one-liner I hope is good news for many of you.

It was very hot on Saturday, and we arrived at the ballpark two hours before the game. The Yardgoats had suggested arriving early to avoid the traffic from other Hartford area events. They agreed to open the gates at 4:00 (for a 6:05 start) and they allowed vendors to sell food and drinks. Our seats were in a still sunny area, so it was a hot start.

I looked over at Faith during a period of strong gusts and said, “that breeze feels good.” She looked at me and said:

“That breeze is the leading edge of a hurricane!”

Yesterday, I received an update from Andrés Blanco, one of the developers at WordPress. Andrés has been working on the problem many of you are having where you are suddenly disconnected from blogs you are following (like mine). Andrés’ email was a one-liner:

“Based on the collected logs I drafted a potential fix for this issue that is now deployed. I will keep an eye on the logs to see if it mitigates the issue.”

Let’s all hope Andrés is successful.

Although Henri had headed out to sea, it rained all day on Monday.

The bees love the Rose of Sharon blossoms

We have had a lot of rain, but the heat has kept the puddles to a minimum size – until now. 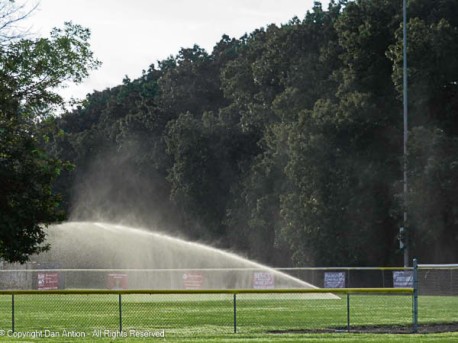 As if we needed more water.

I guess the honeysuckle came back for the water.

We are still seeing bunnies, but this one is from July 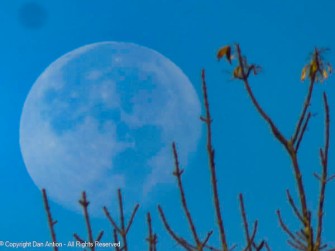 The full moon was still shining when Maddie and I walked on Tuesday.

Everything was wet Tuesday morning.

“I’m telling you, even if we both get on the same horse, we don’t weigh enough to make it bounce.”

The crows are still trying to scare up a ballgame. 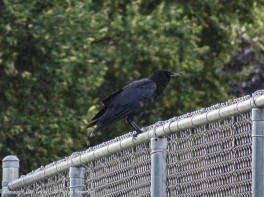 Jinx is getting comfortable on the backstop.

This curtain was in my way.