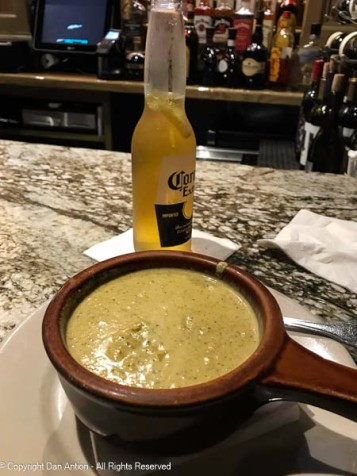 Soup of the day was broccoli cheddar. A little too smooth for me, but good

“Can we work out a better schedule? One where you brush me and then leave.”

It’s Saturday. The forty-first week of 2021 is almost over and there are sixty-nine shopping days until Christmas, if that matters to you. More importantly, there are about nineteen hours left to participate in Linda G. Hill’s fun, frantic Stream of Consciousness Saturday prompt (as of the time this post went live). David and I are gathered here at the bar. It looks like Cheryl has the day off. We will muddle through without her…somehow. Today’s prompt is an easy one, if you’re familiar with how this blog starts every Saturday,

“Your Friday prompt for Stream of Consciousness Saturday is ‘if.’ Start your post with the word ‘If.’ Enjoy!”

If we were having a beer, you’d be wondering what all the commotion in the skies was about this week.

“Welcome gentlemen. Are you having your regular drinks today?”

“Ugh, hi Skippy. I can’t speak for Dan, but I would like a John Howell’s Special – a complete special if I might add.”

“He can speak for me, Skippy. I’ll have a Corona, with lime, please.”

“Since I can speak for him, Dan also says to put this all on his tab. He’s still paying off an old debt.”

“David how long are you going to milk the SoCS drink giveaway. I said I was sorry.”

“OK guys, here we go. David, a glass of John Howell’s Bourbon, a snifter of seltzer and a glass of ice. Dan, an ice-cold Corona with my signature two-lime balance. Will there be anything else?”

“Wait, before you clink the glass, here are two cherries for your bourbon.”

“Dan, you live over by the airport, what was all the hubbub in the skies over there this week?”

“Birds? No, this was way too loud to be birds. Besides, ospreys don’t come this far north.”

“Not birds David, Bell Boeing V-22 Ospreys – The tilt-rotor aircraft. You know take off and land like a helicopter, fly like a plane.”

“What are they doing here?”

“Protecting the skies for Biden.”

“No, Carl Biden the shoe salesman.”

“Landing in Air Force One – it’s where the airport is.”

“Stop being a jerk, Dan. Why is President Biden in Connecticut?”

“He made a stop in Hartford to pitch his ‘build bigger, better, whatever’ thing and then he went to UConn.”

“Did he come for the football game? UConn is playing Yale today.”

“I doubt very much the President of the United States would come to watch a team that currently has zero wins and seven losses. He came to help dedicate the Dodd Research Center for Human Rights.”

“I thought Bill Clinton came to dedicate that back in the nineties.”

“He did, but that was the first dedication. This is a new version of the building.”

“Which Senator Dodd is it named after, Dan?”

“Both. The father had a long history of being involved with human rights. Starting when was a prosecutor at the Nuremberg Trials. The son also was an advocate of human rights, so they both get to claim some of the glory.”

“Was the ceremony open to the public?”

“No, but they live-streamed it, David.”

“No. I’ll catch it the next time they dedicate it. Besides, the last time I was in the audience while Chris Dodd was speaking, I was asked to leave.”

“You guys want another round?”

“Wait a minute, Dan. You were thrown out of a Chris Dodd event? Do tell.”

“I wasn’t thrown out. I was asked to leave.”

“He was promoting the New England Interstate Banking Bill in nineteen-eighty-three. They invited the partner in charge of the banking division at the firm I worked for.”

“That wasn’t you, Dan. I know you were never a partner at Peat Marwick.”

“No! – not even close. I was a manager. The partner couldn’t go. They sent me instead since I was a consultant specializing in banking.”

“Get on with how they gave you the bum’s rush.”

“They opened the floor to questions, and…”

“And you opened your big mouth.”

“I asked why he was supporting a bill that was likely going to cause all of Connecticut’s major banks to be gobbled up by out-of-state entities.”

“Good question. What did he say?”

“I don’t know. Two big guys asked me to step outside for a minute. Once outside, they closed the door and told me I wasn’t going back in.”

“No problem, Dan. I heard part of your story. It’s funny to think about people actually going into banks.”

“Where do you bank, Skippy?”

“Right here on my phone, David.”

“Who do you bank with? If I might ask. You know, what bank?”

“The one with the flag logo. Here…hang on…Bank of America. Is that a good one?”

“And you were worried, Dan. Cheers.”

Ospreys have a distinct sound. As soon as we heard it, we knew it was nothing we regularly hear. 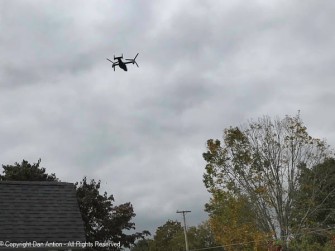 One flag – every citizen. This might be my favorite photo. 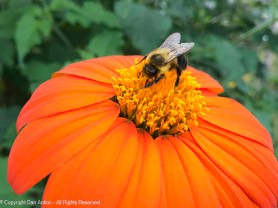 The bees are moving slowly, but they still like the tithonias

The sun is lighting up the path this morning 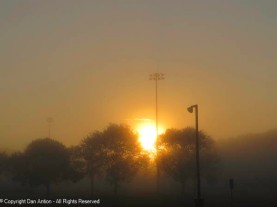 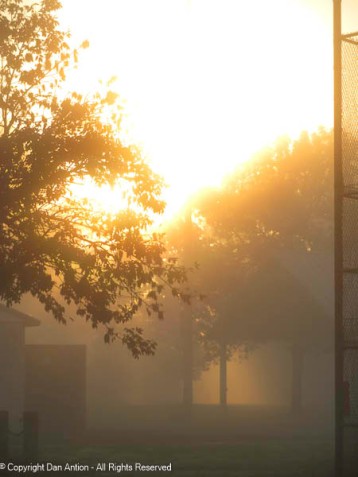 By the time our walk was over, the sun had made much progress

Not many apples left

The sun is strong today.

Smokey’s cousin has a place near the park.

I had to play with this in Lightroom. Do you see the geese? 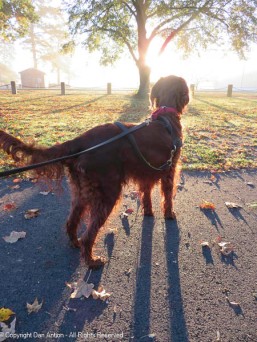 The sun is fighting its way through the fog. 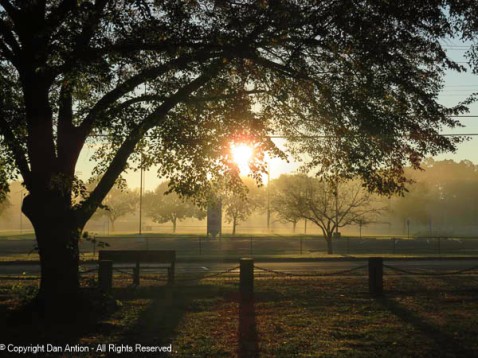 From one park into the other

First Maddie blocked my shot, then she stepped on the leaves. 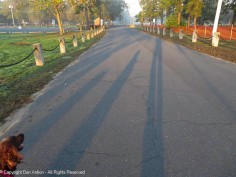