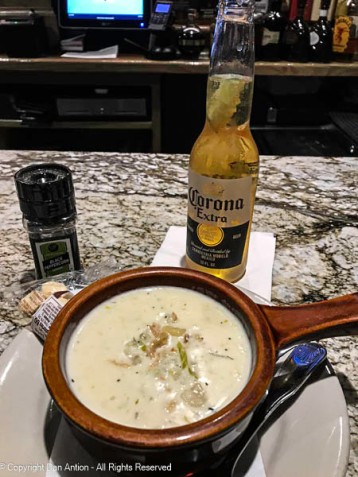 They make the best chowder at the bar. 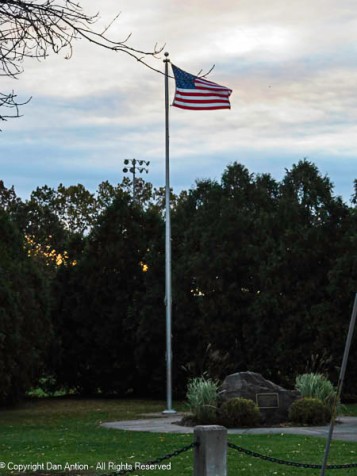 One flag – every American – flying proud.

It’s Saturday, if the weatherfolk were correct, it’s raining and it’s not quite 50°f (10°c). Still, it’s a great time to relax at the bar, enjoy an adult beverage and share some conversation. Of course, we’ll see if we can work in the Stream of Consciousness Saturday prompt that Linda G. Hill gave us.

“Your Friday prompt for Stream of Consciousness Saturday is ‘boo.’ Find a word with the letters ‘boo’ in it or use ‘boo’ as is and base your post on it. Enjoy!”

Oh well, if we were having a beer, we’d stumble around some confusion.

“Good afternoon my young friend. You’re just in time to buy me a glass of John Howell’s Bourbon.”

“Ha! Perhaps I should have come later.”

“Actually, I thought you were going to be late today.”

“Late? Dan’s never late for a cold beer and a hot bowl of chowder on a cool Saturday. You boys having your usual choices?”

“We are Cheryl, and since I have the tab, let’s have two bowls of chowder. In the meantime, I’ll try to figure out why David thought I was going to be late.”

“At first I thought you’d still be responding to comments about the caboose photos you shared on Thursday.”

“People did seem to like that little car, but something else must have made you worry.”

“Yes, I saw you dragging a washer and dryer in your trailer. I figured you’d be busy installing those, and I know how plumbing projects can go off the rails, as it were.”

“You’re close, David. In fact, the reason I was dragging those appliances around was out of fear that a plumbing project would go south, but not the way you think.”

“Here’s your beer, Dan and easy on the ‘going south’ as a way of expressing failure. I’m from the south, remember…”

“Actually, Cheryl, the expression ‘going south’ originated with several Native American tribes long before there was a south to go to. It’s what they said when someone was dying.”

“Well, thanks for that bit of clarification, David. You really can be charming. Here’s your bourbon, your seltzer and your ice.”

“Sorry, they went south overnight. I’ll see if I can find a new jar.”

“Cheers Dan. Now, if you would be so kind to explain how fear of plumbing failure caused you to take your appliances for a ride.”

“Well, David. We had been planning to replace our washer and dryer…”

“Forgive me for interrupting, Dan, but can you start the story a little closer to the end? I’d appreciate it.”

“Why? I’m paying for all the bourbon you can drink.”

“My point was that before we could install a new washer, I needed to replace the shutoff valve.”

“You mean that doohickey behind the washer that turns off the water?”

“I was trying to avoid using technical terms but yes, that doohickey.”

“Do you actually use that thing?”

“My wife does, but the one we had was old and had gotten very hard to operate.”

“Couldn’t you just repair it?”

“If I had bought the right valve twenty-eight years ago, I could have, but I bought a special valve from Home Depot instead of the industry-standard Watts valve.”

“Home Depot was new to the area; I was enamored with the ‘Big Box’ concept. What I didn’t understand is that after a year, they’d never have that valve, or its replacement parts ever again.”

“Those have been around forever, and they actually come with an order form if you want to buy the repair kit. Some companies just have the right approach to the market.”

“The end, Dan. Are we anywhere near the end?”

“We’re almost there. Since I wasn’t sure replacing that valve would go according to plan, I wasn’t comfortable ordering the washer to be installed or the old one to be carted away. If I was still moving a washer in and out of position, I didn’t want it to be the new one.”

“So you were hauling the old one to the dump this morning.”

“Well, the recycling center, but yes.”

“Don’t the pick those things up in your town?”

“They do. They pick up bulky items each week, but they only pick up metal on the fourth Friday of each month. The same day we had our machines delivered.”

“You could wait until November, what would that be, the twenty-sixth?”

“It would be the twenty-seventh, pushed back due to Thanksgiving. I didn’t want to warehouse the old machines that long.”

“Understandable but dragging them around in the rain couldn’t have been much fun.”

“You boys ready for another round?”

“We are Cheryl, and perhaps some wings.”

If the thought of going, particularly driving south reminds you of a song, look below the gallery for a song by Suzy Bogguss – or is that Boogguss? 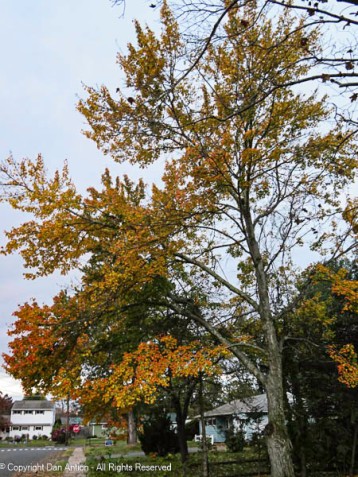 The trees around here lost a lot of their leaves during two days of strong wind and rain. 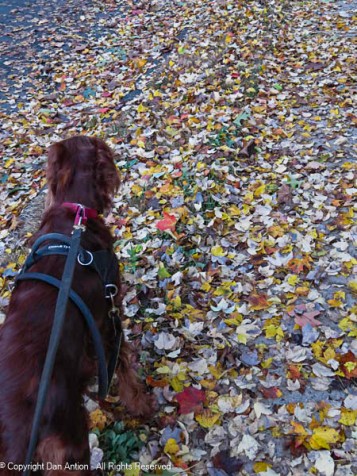 Maddie on a car[et of color 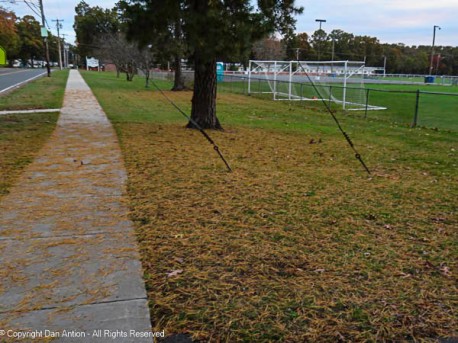 The storms brought down tons of pine needles 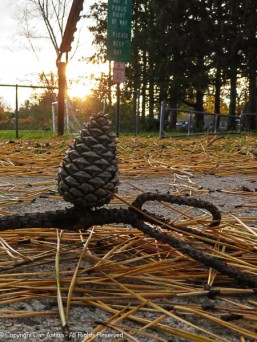 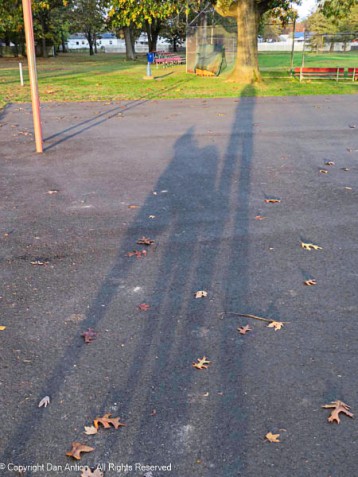 Maddie was happy to be walking. We missed three walks due to the storms. 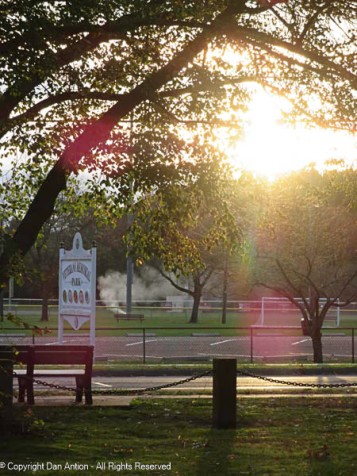 You can see the sprinkler being cleared just to the right of the sign. 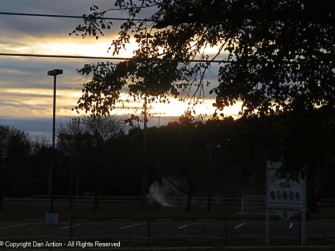 They are blowing out the sprinkler lines. 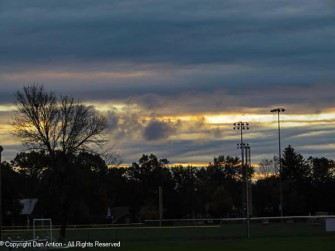 We are walking a little later these days, but the sun was still hiding behind the clouds. 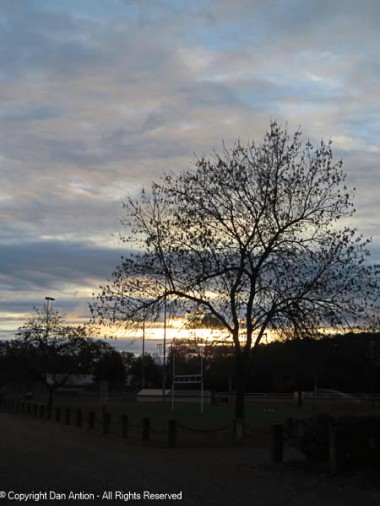 Not much left of this tree’s leaves 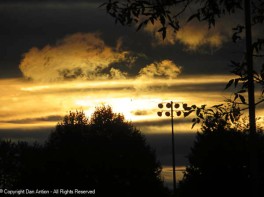 The sky is still churning with wind and clouds 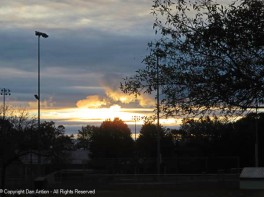 No rain today, and less wind, so we were able to go for our walk. 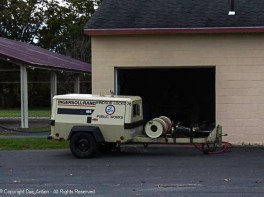 That’s a compressor so they must be planning to blow the water out of the sprinkler lines. 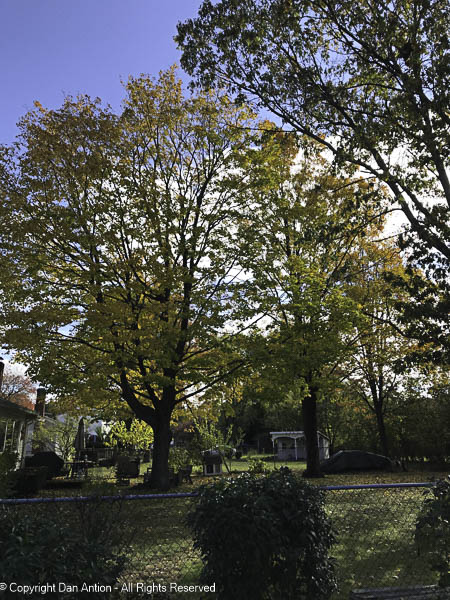 We’re seeing through the trees now 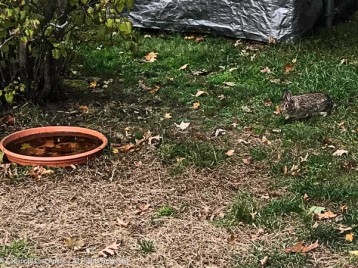 The bunny is blending in very well. 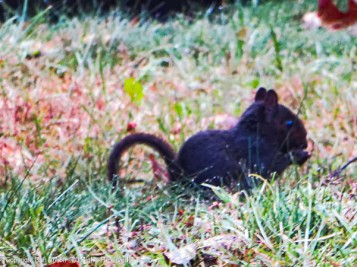 Baby Smoke! He’s still elusive but I got one good picture.