The title should read Duluth Central High and Firehouse Number One. I decided to include the firehouse in this post because the two buildings are located at opposite corners of the intersection of First Avenue and Third Street in Duluth. The firehouse ended up in a picture I took of the school and you know how it goes with door fans, we have to investigate.

The information listed below was taken from the National Registry of Historic Places (NRHP) nomination forms for the buildings. Let’s start with the high school.

Old Central is a very fine example of that traditionally rich architectural style known as Romanesque and is certainly the most outstanding structure of its kind to be found in northern Minnesota. The facade and tower present a totally pleasing design width exceptionally beautiful proportion and line. The vertical fenestration and tower are exceptionally well studied wherein particular consideration was taken due to the fact that the viewer would at all times be standing considerably below the building, resulting in a foreshortening of the verticals. Expert attention was also paid to the scale of the building. This was perfected in part through belt coursing and rustication bf the beautiful stonework. The building, too, is skillfully sited on a full city block of hillside property of considerable slope.

The building is made of Lake Superior Brownstone. The rounded arches of the entrance are repeated in rows of windows, and in the large stone wall dormers, and on the clock tower, with its huge, illuminated glass dials.

The firehouse was erected by the City of Duluth in 1889 in a modified Romanesque style. The two-and one-half story red brick and sandstone building measures fifty feet long by ninety feet wide with walls extending thirty feet high.

The Third Street facade and the First Avenue East side elevation door and window openings are uniform and balanced. All window and door openings are Romanesque style arches, except for the three attic windows on the front facade. On this facade the voussoir arches are composed of sandstone on the first floor and brick on the second. Sculptured capitals on the pilasters are located on the first floor (see photographic detail of the entrance). On the second floor is a loggia with a projecting elliptical balcony and wrought iron railing. The triangular portions above the second-floor loggia have sculptured panels depicting crossed fire horns. A corbelled brick cornice is surmounted by a brick parapet finishing the top of the building and the central bay of the front facade projects slightly outward from the front elevation.

If your want to take a virtual tour of the clock tour, you can follow this link.

Thanks for visiting this post. I hope you enjoy the gallery and I hope you will visit some of the doors that are linked to in the comments.

I was heading to the stairs (I didn’t know they were chained).

I guess the “I didn’t know what time it was” excuse was useless in Duluth.

Stairway to the main entrance.

This was as close as I could get to the main entrance and doors. There were chains across all the walkways.

The side door. Imagine trudging up those stairs in the winter.

The sun was rising. The light accounts for the difference in the color.

Side view of the high school 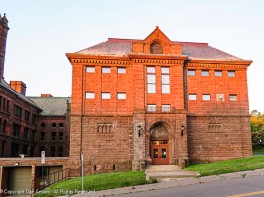 Northwest wing of the school

Entrance to the high school at the northwest corner.

No door, but I love the details in the brick work.

This gate is on the lot behind the firehouse. 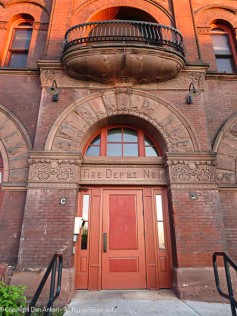 Main entrance to the firehouse.

One of the firehouse doors. 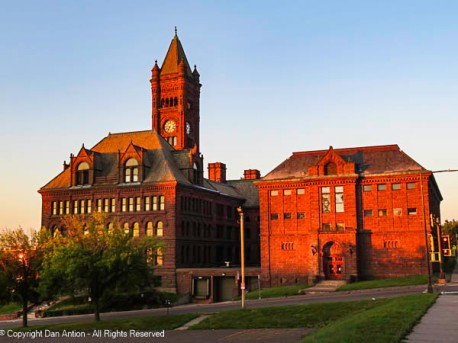 The Firehouse is across the street, directly to the right